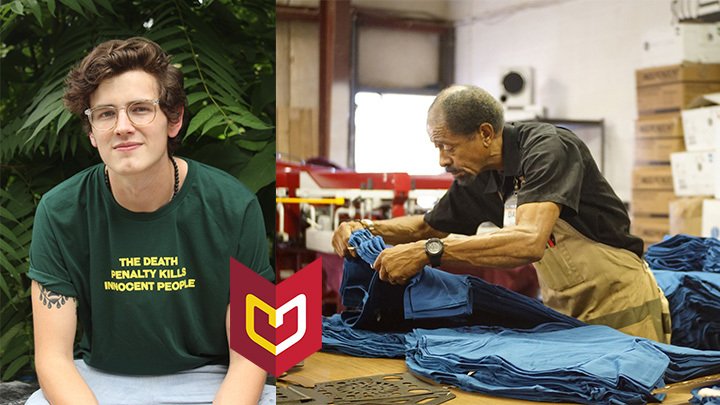 In 2019, Skyler Rich, a Calvin business major, started a small business, For Everyone Collective (formerly called Forgive Everyone), with the goal of helping those who have been incarcerated. Upon graduating in 2020 during the pandemic, Rich decided to make it a full time venture by opening a print shop, soon to be called The Print Shop For Everyone. With rapid success on social media, Rich has been able to expand his business to now support five full-time employees, all who have been incarcerated or have been directly impacted by incarceration. We first spoke to him in 2019, but recently caught up with him for an update.

A lot has changed since 2019, can you give us an update on your business?

While I was still a student, we jumped on social media to post our shirts and we just happened to have a few blow up. That brought us to the point where we started printing all day long. I would go to class only to come home and print shirts in my garage all day. We ended up hiring a part-time worker, Mac, to help keep up. In July of 2020, a couple months after graduation, we ended up moving into a 2,500 square-foot production space in Grand Rapids. We’ve grown since then—we now employ five people including myself. Everyone has been formerly incarcerated or directly impacted by incarceration. We also got an automatic printing press, which helped us scale up. We’ve never had any investment; we weren’t given a big loan up front to do it. It was just kind of little by little, one shirt, then two shirts, then three. And then here we are.

Originally our message was “forgive everyone,” but the more we learned about the prison system, the more we realized there are a lot of people in prison who don’t need forgiveness. They didn’t do anything that hurt someone else, but they are still in the system. The system is not set up to stop harm before it happens and it doesn’t really do anything to transform that harm after it happens. We saw people sitting in jail pre-trial because they didn’t have the money to get out. The pandemic was just ripping through jails and prisons and killing people in a huge amount because it was a germ box where people didn’t have the option to leave or didn’t have the option to isolate. So, we started donating to bail funds.

I’m a 22-year-old who has been in this world for four years. I wanted to keep myself accountable to the people that we’re claiming to try to do something for; so last year, we brought on some partners from L.A. who took partial ownership. We also added worker ownership so now all of our employees have ownership as well. We were also able to raise our wages over the last year, so now our minimum starting wage is $17 an hour. The average wage is $20 an hour, and we also cover 100% of everyone’s health insurance premiums, dental insurance, and life insurance.

You’ve met and written a lot of formerly incarcerated people’s stories. What have you taken away from building these relationships?

When I was just starting out with my business, I was given the sound advice that I needed to get to know the people who I wanted to help. So, I put an ad up on Craigslist to write people’s stories. I was able to get a close and personal look of how far the impact of being incarcerated can be on someone’s life—beyond just the collateral consequences. And the more people you get to know, the more you start to put together that none of these people woke up one day and just decided to do harmful stuff. If you look at the cases of people that do violence, there’s trauma, isolation, broken relationships, and financial issues in their past. Then you look at what prison does to someone, and you see that it’s hyper traumatizing. It separates you from your community, there are tremendous spikes in mental health issues, there are minimal resources, and it completely wipes out financial reserves.

From what you’ve shared in the past, you seem to have grown a lot as a person while at Calvin. What advice would you give students coming into Calvin?

It’s way harder to do than it is to say, but venture outside of whatever social groups you have coming in. Some of the most life-giving relationships I’ve had came from people that I met my first year on campus. Make sure you’re putting yourself out there and just trying to meet as many people as you can.

There are so many opportunities that Calvin puts out like Unlearn Week. There are so many opportunities to go out there and meet people, particularly people who share a different experience from you. And I don’t think there’s a better time in your life for that than college when your brain is still developing and you’re building your ideas about the world. Try to get as many experiences and insights from others as possible. If you stay in your bubble, you’re not going to get that, and I think that’s the best thing colleges can provide—the breaking open of that bubble.

Go to the events, go to Unlearn Week, listen to your profs, and actually care about all of it.

What keeps you engaged and going in your work?

Relationships are everything. A really cool thing that’s happening, in terms of the relationships that are being built at For Everyone, is that they have changed all of our lives. We’ve experienced time and again the right person, right place, right time. It’s amazing to experience.

Relationships are the reason that a lot of people here do this every day. Our employee, Jazz, had been in prison for 40 years and he is always talking about the people who he left behind. He built relationships that are decades old, and now they’re still sitting in this cage and he’s free. He’s driving around. He has a house. There’s survivor’s guilt. 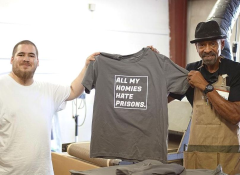 Pablo and Jazz hold up one of the t-shirts they designed and printed. Photography courtesy of For Everyone. 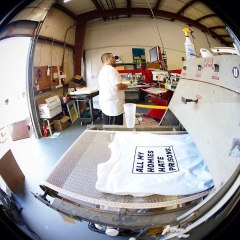 Pablo at the press. Photography courtesy of For Everyone.