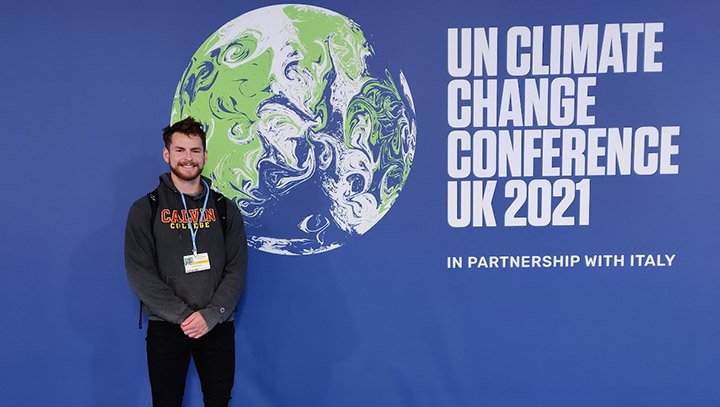 Andrew Huston, a 2020 graduate with a bachelor of science in engineering and a concentration in mechanical engineering, is currently working as a systems engineer on NASA’s HALO program. He thinks deeply about what it means to be a steward of Creation and how his individual vocation impacts the broader world.

How did you choose a major?

I'd known since high school that I wanted to study engineering—part of why I chose Calvin was because of the solid engineering program! However, I didn't initially know which concentration I wanted to pursue. I eventually decided on mechanical engineering because out of all the available concentrations, I felt like mechanical engineering had a little bit of everything that I had grown to appreciate from my undergrad classes: statics, dynamics, instrumentation, thermodynamics, and a lot more. I really enjoyed the diversity of material taught in the program, because it both allowed me to get a better understanding of the different subdisciplines available within the field and taught me enough of the concepts across the field to talk intelligently with engineers of different disciplines.

What are you currently up to? And what do you love about it?

I'm currently blessed with the opportunity to work for Northrop Grumman as a systems engineer on the HALO program. A systems engineer is responsible for making sure all the components of a project come together smoothly and work together in a system. This means we're often interacting with a lot of different kinds of engineers on a daily basis, from electrical to thermal to structural and beyond—so the exposure Calvin's program gave me really comes in handy! Since we deal with the whole system, I also end up wearing a lot of different hats from day to day. Sometimes I'm reviewing integrated test plans, sometimes I'm running calculations, and sometimes I'm tracking testing exceptions. I enjoy the variety, and I think my favorite part of my job is that I get to keep a big-picture perspective of all the individual parts coming together.

The HALO program I'm working on is part of NASA's larger Lunar Gateway program, which itself is a big part of the Artemis program. The Lunar Gateway is a space station that will orbit the moon and will serve as a permanent staging ground for future expeditions to the lunar surface and even to Mars! I'm really blessed to be a part of this next step in human exploration of God's creation, continuing our calling to go out and revel in his handiwork.

You recently went to a climate change conference. Can you tell us about your experience there?

I'm currently working on my master of science in mechanical engineering through Michigan Tech, and as part of one of my courses, back in November I had the opportunity to attend COP26 in Glasgow as a Non-Governmental Organization (NGO) observer. COP26 was a Conference of the Parties (COP) to the United Nations Framework Convention on Climate Change (UNFCCC). In other words, COPs are large meetings where all 197 members of the UNFCCC agreement come together to discuss how best to respond to and limit climate change going forward. For example, the Paris Agreement was drafted, finalized, and signed at a COP.

At COP26, I was surrounded by people from many different backgrounds—geographically, professionally, and culturally! We had scientists bumping shoulders with politicians and mixing with entrepreneurs, each with a different perspective and purpose for being there. It was such a blessing to meet with so many experts who were full of both knowledge and passion for their respective fields, whether it was oceanology, economics, or predictive modeling. I even had the honor of meeting one-on-one with Helene Hewitt to talk about her work as the lead author of the ocean and cryosphere science sections in the IPCC AR6 WGI report. One of the most interesting things was how all these different people had come from incredibly diverse cultural and professional backgrounds to work towards the common goal of saving our planet from ourselves.

Was there someone at Calvin who had a big impact on you?

Certainly! Too many to be able to fairly mention here—each and every one of my professors, my track and field coaches, and my RA staff mates, just to name a few. I'm thankful for each of them, and I think each in their own way has left a mark on who I am today. Throughout my time at Calvin, I learned a lot about what it means to be a steward of Creation, but I think the person who taught me most directly about how I can use my technical engineering skills for creation stewardship was Professor Heun. In ENGR333, we had a really interesting class project on energy rebound and determining how efficient “low energy alternatives” really are. Without getting too into the details of that project, my biggest takeaway was that engineering isn't an island unto itself, and our designs can have massive ripple effects beyond our initial intentions. While policies and economics can have big effects on engineering, the reverse is true as well! There's something absolutely fascinating to me about how technical innovation and analysis can have a big effect on sociological phenomena.

What makes you proud to be a Knight?

I'm really proud of Calvin's holistic approach to education, especially as encapsulated by the liberal arts approach. I chose to attend Calvin largely because even though I wanted a degree in STEM, I also wanted to grow in other fields. I'm not just a better engineer, but also a better thinker, communicator, and Christ-follower because of my time at Calvin. Calvin produces Knights prepared to engage with the world. When we talk about serving as agents of renewal, we're talking about this deep, systemic renewal of creation. We go out into a fallen world not confined to the discipline written on our diplomas, but rather fully equipped, able to see how our individual vocations are interwoven together into a tapestry as complex and broad as the world in which we live. For example, Calvin teaches us engineers not just how to solve for the thermal convection coefficient in a given problem, but also why solving for the thermal convection coefficient matters—both for my given problem and for my vocation as a whole. Calvin taught me to see not just how a certain technical skill applies to technical problems, but also how I can translate it to broader, more impactful applications.

What is your advice to students who are looking to make an impact?

I think the biggest thing is being faithful with what the Lord has given you in a given season. Each of us has been given our own little realm of influence, a little patch of soil to till, water, and cultivate. Sometimes we don't see the fruits of our labor as soon as we'd like, and sometimes we'd much rather be working on something else, somewhere else. Nevertheless, we should remain faithful to our plot of Earth, and keep working it for the kingdom. That said, if the Lord has placed a strong interest on your heart, I think that's really worth pursuing! Sometimes ambition and vision are the biggest things the Lord bestows on us. Prayer is really key to finding the balance between faithfulness to what we're called to today and openness to what we're being called to tomorrow.