Mapping: a creative path for all students 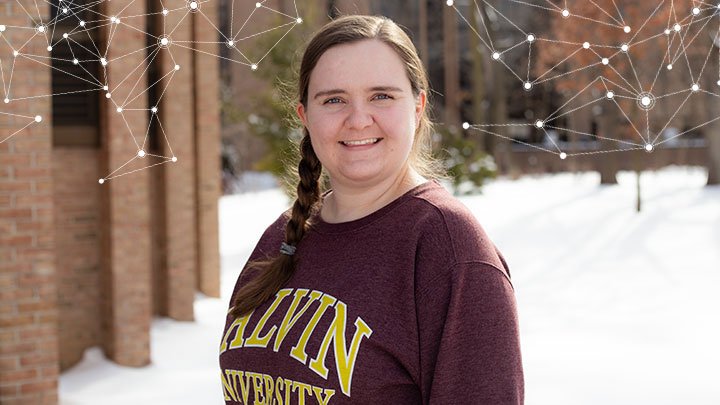 Eleanor Ludwig found GIS at the perfect time in her academic career.

Like many freshmen entering college, Ludwig, a sophomore from a small, rural town in southeastern Colorado, came to Calvin without a clear idea of what direction she should go in.

Having grown up with a dad who is a high school science teacher, Ludwig knew she wanted to go into science, but she wasn’t sure where she would fit best.

She got hands-on experience with phage research as a freshman and took several interesting biology classes, but she realized through it all that she did not want to spend her life in a lab. She kept digging and stumbled upon the environmental studies major with the geography track.

“I randomly clicked on the intro GIS course without knowing anything about it,” said Ludwig. “My high school geography class was nothing like my classes now.”

What exactly is GIS?

Geographic information systems, also known as GIS, is a framework for gathering, managing, and analyzing data. The introductory course at Calvin, “Geographic Information Systems and Cartography,” allows students to learn about the art and science of mapping while also being able to tailor projects to their disciplinary interests. For Ludwig, GIS was a tool that allowed her to connect with more interests than just science.

“I realized really quickly how useful GIS would be,” she said. “It isn’t a pure science. It’s more like a tool in a scientific field that I can take down any career path. I have so many interests and want to take so many electives. And with GIS, I can apply it to anything.”

Geography professor Jason VanHorn said, “GIS epitomizes a liberal arts education, as it provides the theory and application in mapping that include built and natural environments. Geospatial tools like GIS and cartography give students a glimpse into a broad array of possibilities along all manner of themes. Whether you are an artist, philosopher, writer, or scientist, there is a place to go deep with GIS. It is one reason I see so many different majors from all corners of Calvin in our GIS classes each semester.”

Calvin offers three GIS courses to undergraduate students: GEO 260, 361, and 362. Once a student completes the three courses, they will earn a GIS certificate —regardless of what their major is.

“Every Calvin student should earn it,” said VanHorn. “Who doesn’t love maps and drones? For any student who completes the GIS certificate, you will have earned 12 hours towards the 30- hour online master of science in GIS program at Calvin. That means those students can complete the master’s degree in one year and at one of the lowest costs in the world.”

The Artistic Side of GIS

Ludwig’s final individual project for GEO 260, Spatial Analysis of Cultural and Historical Resource Sites in the Purgatoire River Region of Otero County, examined the juxtaposition of people, culture, history, and environment in her hometown region of southeastern Colorado. She found a report from 2011 that catalogued all the historical homestead sites in four counties in the region. With this data, she was able to map historical homesteads and Native American sites in relation to water and to the Santa Fe Trail. She found that almost all the historical homesteads were within one mile of the Santa Fe trail or water.

“It surprised me how artistic you can get with GIS,” said Ludwig. “You have an incredible amount of artistic vision on what you want to create. I used to have this idea that only painters could be artistic. My GIS coursework is really fun because it blends information science and art and all these really pretty things.”

With interests in Chinese, criminology, and much more, Ludwig is unsure of where exactly her career will take her. What she does know is that GIS will serve her well no matter where she goes.