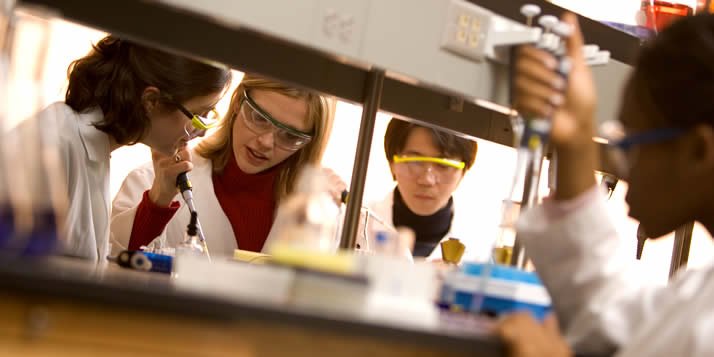 The annual summer luncheon is orchestrated to help students connect with those who help fund their research fellowships. Professors working with research fellows come, too, to celebrate the opportunities Calvin students have to do get hands-on experience in their academic fields.

Termite guts wouldn’t typically make for good conversation around the lunch table, but at this year’s summer research fellowship luncheon, they were of particular interest. Senior Eunji Kim, a biology major from Dayton, Ohio, is partnering with Calvin biology professor Jon Wertz to study a particular organism inside the cellulose-digesting insect’s gut to see what the particular microbe does. The findings could have implications for studying how the human gut works.

Other lunch tables at the summer research luncheon were abuzz with conversation surrounding the many topics being studied by this year’s summer research fellows: wind power generation, African pastors’ attitudes about HIV, cholesterol, the ideal electronic atom, Christian business ownership and anti-urbanism in the Christian community, to name a few. About 90 students, 76 in the science division and 14 in the humanities and social sciences, are working with 54 professors on research projects this summer.

The annual summer luncheon is orchestrated to help students connect with those who help fund their research fellowships. Professors working with research fellows come, too, to celebrate the opportunities Calvin students have to do get hands-on experience in their academic fields.

Wertz, a summer research fellow himself while a Calvin student, was there to support his mentee, Kim, and to provide an example of what the experience can do for one’s academic career. As an undergraduate at a state university, Wertz thinks he would have likely found himself in a lab only as a dishwasher; instead, as a student at Calvin, he was able to do the kind of research that prepared him for graduate school.  As a new professor at Calvin, he’s pleased that he is encouraged to pursue both research and student mentoring without giving particular weight to one or the other.

“Coming from Michigan State University and only in my first year [as a professor at Calvin], it’s amazing that I’m able to have two students without having to get external grant money,” Wertz said.

Not only the sciences

Also benefiting from the summer research fellowships are professors and students in the humanities and social sciences, for which grants are almost impossible to come by. Helen Sterk, chair of the communications arts and sciences department, spoke about the gratitude she and her colleagues feel for being able to embark on special research projects with a student to help in the work. Sterk, along with junior history and geography major Emma Slager from Grand Rapids, is conducting a research project gathering the oral histories of those involved in the discussion regarding women in leadership in the Christian Reformed Church.

For Slager, working on the project has helped her develop skills that she likely wouldn’t have learned in the classroom. She’s spent her summer digging through archives looking at things like minutes from meetings, and then interviewing some of those present at the meetings. Reading and analyzing primary source texts, among other things, has helped her grow as a student scholar.

“I’ve really improved my interviewing skills and my ability to think on my feet,” she added.

Students like Slager and Kim are among those being actively prepared for further studies after finishing their degrees at Calvin.

“I think students shoot higher because of these fellowships,” said President Gaylen Byker in remarks about the summer research program at Calvin.

Provost Claudia Beversluis, speaking at the end of the luncheon, was impressed by the research presented by the students.

“I had this moment of prophecy, seeing into the future when some of these students will come back here as professors! We’re seating the next generation of academics in Christian higher education right here,” she said. 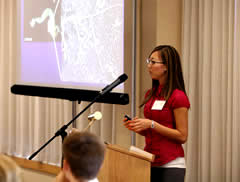 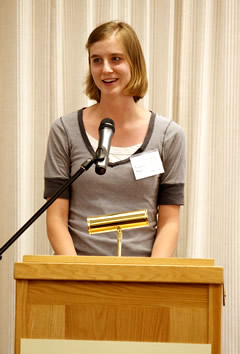