Lighting the FYRES of research 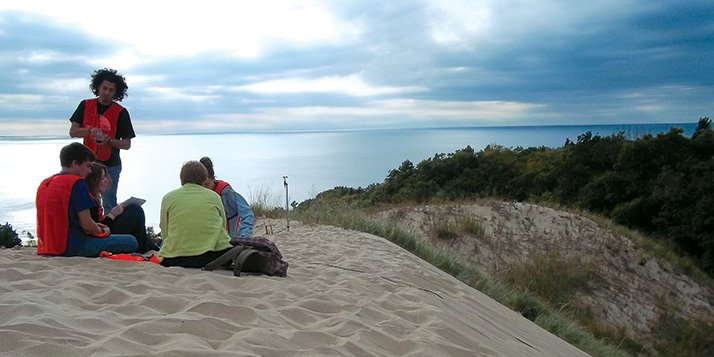 First-year students are learning how to research in the Michigan dunes.

Ashley Van Wyk grew up hiking around the dunes of western Michigan, particularly Mt. Pisgah in Holland. “We climbed it every year,” she said.

Krystal Perry, who grew up on the east side of the state in Davison, Michigan, had a different experience. “The only thing I knew about the dunes was The Legend of the Sleeping Bear,” she said, referencing a children’s book about a northern Michigan dune, “which, I guarantee, is not the way it was formed.”

Both Van Wyk, a business marketing major, and Perry, a history student, are among the 23 first-year students who researched geomorphology and human impacts this fall at six Lake Michigan dune systems. The students and their six mentors were enrolled in the First-Year Research in Earth Sciences (FYRES) program created by the geology, geography and environmental studies (GEO) department. Now in its second year, FYRES was designed to give incoming Calvin students hands-on experience in science research—and to instill in them a love for science.

“It’s probably not as important that they say, ‘Oh, I know a lot about dunes!’ said geography professor and FYRES director Deanna van Dijk. “It’s given them the background in science and also the excitement of it.”

One group (which included Van Wyk), worked on Mt. Pisgah, studying the effectiveness of boardwalks, fences, dune grass, public education and other erosion management techniques on the dune. Another did similar work at North Beach Dune in Ottawa County. Yet another group assessed the effectiveness of sand fences, vegetation plantings and other measures at Castle Park Reserve, a dune system south of Holland.

There was a group that used instruments to study the effects of storms on dune activity at P.J. Hoffmaster State Park and another that used GPS, wind vanes, anemometers and other methods to research the blowouts in the Kitchel-Lindquist Dune Preserve. And there was a group that mapped dune features, trails and the location of every Pitcher’s Thistle plant (a threatened species) at a new dune preserve north of Muskegon.

“For me, the research was great, the whole process was great—just being around all this beauty,” said Jacob Zondag, a first-year environmental  studies student who worked on the assessment of Mt. Pisgah.

The FYRES program teaches students both the thrills and the frustrations of scientific discovery, van Dijk said: “Sometimes the equipment didn’t work, and sometimes the weather was not good … Just walking to the top of the dune was a hard thing for some students to do, but that’s all real. That’s research.”

More than one FYRES team had to deal with vandalism on their projects. “We had some people come through. We didn’t know what they were doing, but half of our erosion pins were pulled out,” said Jory Smith, a first-year environmental science and biology major researching at Kitchel-Lindquist Dune Preserve.

And it got cold: “You’re up on a dune, and it’s windy up there,” explained Zondag, who also experienced the effects of Hurricane Sandy on the research site: “It was just neat to see how the wind and … weather patterns affected the dune,” he said. “It was like an accelerated version of what goes on every day.”

The students also enjoyed the community that grew out of the research. “You’re up on this dune, and there are times that you’re walking for a half-hour, so there’s nothing to do but talk,” said Van Wyk, “so you get to know all these people you wouldn’t normally know.”

Six upper-level GEO students mentored the FYRES teams, one for each dune site. The FYRES mentors developed the research projects, with input from van Dijk, and taught the students the various research techniques. “I found it really fascinating, more than fascinating—fun—to watch them go from students to researchers,” said Linden Brinks, the junior geography major who worked at the Hoffmaster site.

The research compiled by the FYRES teams could have a big influence on  how the various dune sites are managed. When the students presented their FYRES findings at a November 29 GEO department symposium, Jacqueline Bilello, the stewardship coordinator for the Land Conservancy of West Michigan, was in the audience.  Bilello manages the Castle Park and new dune preserve sites, and she appreciates the students’research “It’s stuff that I wouldn’t normally be able to do,” she said of the students’ work.

The FYRES project grew from van Dijk’s 12 years of experience working with student researchers at Hoffmaster, Mt. Pisgah and other sites in west Michigan.

“The question was how could we give more students these research experiences,” she said. Her answer, after a long period of mulling, was to create a new physical science core course based on an intensive research experience. To fund the course development, in 2010 van Dijk landed a three-year, $183,000 grant from the National Science Foundation. After a year of development, FYRES launched in 2011.

The program has been a hit with prospective students, which was the intention from the beginning. “A lot of our majors discover geology or geography while they are at Calvin,” van Dijk said. “We wanted to give them a chance to try out geology and geography in their first semester.”

Van Dijk is working on a second NSF grant to fund the upcoming years of FYRES. She’s looking forward to the investigations to come. “I could keep going for decades in this area because there’s still so much I don’t know about dunes,” she said. 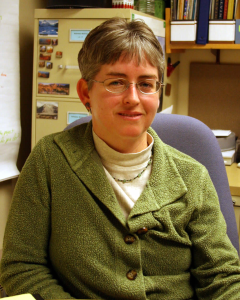