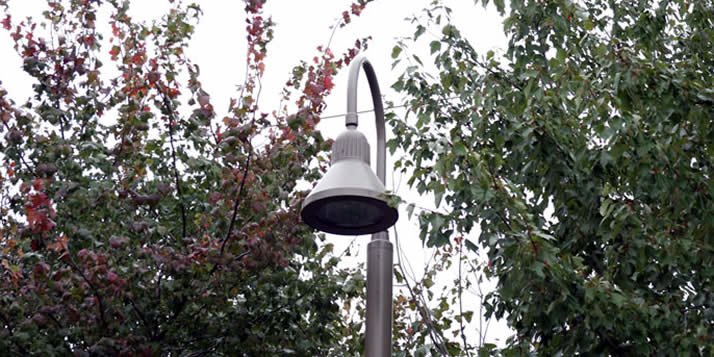 What do a cobra head, China hat and shepherd’s crook all have in common?

What do a cobra head, China hat and shepherd’s crook all have in common?  They’re all names given to outside lighting fixtures installed on Calvin’s campus.

What they don’t have in common is the question four Calvin astronomy students and their professor set out to investigate in a spring 2008 class “Modern Observational Astronomy.”

Three examples of outdoor lighting fixtures on Calvin's campus: the the cobra, the China hat and the shepherd's crook.

The reason for their probe was the interference of light pollution with observatory viewing on Calvin’s campus, particularly produced by the lights immediately surrounding the Science Building, where the telescope is housed.

"Some of the lights in that area were so intrusive they produced shadows on the observatory walls,” said Calvin astronomy professor Deb Haarsma.

Then-students Kathy Hoogeboom ‘08, Jessie Taylor ‘08, John Vander Heide ‘08 and Jess Vriesema ‘09 discovered that the offending luminaries were the China hat variety. Data collected by the students proved that much of the light from the China hat fixtures is "wasted” or travels upwards, away from the intended target.

Conversely, shielded lights, like the shepherd’s crook, provide as much light downward as the China hat, and even more light closer to the pole with much less wasted light, resulting in less light pollution.

"The contrast between straining to see any stars from a bright city street to the shock of seeing the Milky Way in its full glory spilled across a dark sky quickly illustrates the problem of light pollution,” said Taylor.

"This difference in viewing conditions also results in noticeable differences in astronomical data.

"As pollution problems go, light pollution is fairly easy to fix. Simply replace the offending lights with ones aiming light in the useful direction—at the ground where people need it to see.”

Armed with their data, the students asked the administration to consider replacing the lights. “These lights directly limit the ability of the observatory and the observers who work there to teach people about the night sky,” they wrote. “Being able to see interesting objects in the sky is crucial for all astronomy classes as well as for those from the college and its community who visit the observatory.”

The report was well-received by the administration. “This was one of those projects that when it came to the cabinet for review seemed to have significant benefits all the way around,” said Henry De Vries, vice president of administration and finance. “It was clear it would be helpful from an academic perspective and from a facilities perspective would help us get more efficient and appropriate lighting the middle of campus.”

The $60,000 project was funded by the plant fund reserve, and the lights were replaced this summer. “The new lights have made a marked and noticeable difference in the darkness of the observatory area,” said senior Melissa Haegert. “I can’t see anymore the white glare against the roof of the dome as we turn the telescope past the path lights, and the students and I no longer have to worry about losing our night vision when we walk out onto the deck.”

For the students involved in the initial study (though all have since graduated), the response is rewarding. “I learned that a class study really can change things,” said Vriesema. “It is exciting to see that the work we did a year and half ago is now paying off, and that future astronomy students and guests will have a better experience when visiting our observatory.”

The emphasis on reducing light pollution coincides well with the International Year of Astronomy 2009, according to Haarsma. This year celebrates the 400th anniversary of Galileo’s telescopic observations, which revolutionized our view of the universe. “Astronomers are trying to raise awareness and encouraging people to discover the night skies for themselves,” said Haarsma. “It’s a lot easier to do without light pollution.”

The public is invited to participate in Galilean Nights, a worldwide celebration October 22-24, during which the objects Galileo observed (particularly the moon and Jupiter) will be well-positioned for viewing. Calvin’s observatory will be open 7:30 to 11 p.m to facilitate viewing on these dates.

Read the full proposal to replace the light fixtures on the Commons Lawn, written by the spring 2008 Astronomy 384 class.