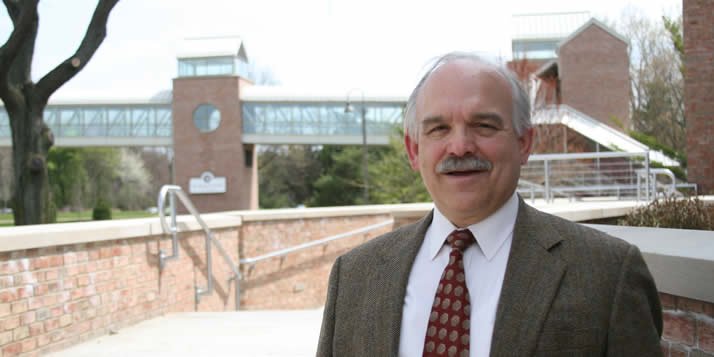 In 1994, Gaylen Byker had already enjoyed an international career in law, business and academia. His most recent project had been using innovative financial structures to help build the Offshore Energy Development Corporation in Houston, Texas, and he was pondering new ventures when someone from the presidential search committee of Calvin College called him.

“The person asked me to send a resume.’” Byker recalled. “I said, ‘I don’t have a resume. I haven’t looked for a job in years.’” He took some time to put a resume together, however, and met with the committee for an interview. “Things went pretty quickly after that,” Byker said, “and I became convinced quite soon that this was a calling.”

In 1995, Gaylen Byker became Calvin’s eighth president. On May 20, 2011, he announced that he will be retiring from that position following the 2011–2012 academic year. He has spent the 16 years in between expanding Calvin’s physical and academic infrastructure.

During Byker’s tenure, the college has re-envisioned its core curriculum, augmented its academic programs, expanded its campus across the East Beltline, renovated old facilities and constructed new ones, hosted a major art exhibition and, (in the same year), welcomed the President of the United States as Commencement speaker, conducted a capital campaign, established six endowed chairs and eight centers and institutes, and greatly enhanced its global presence.

“While his success at fundraising and building may be most noticeable, President Byker’s ability to understand and protect who we are will be his legacy,” said Scott Spoelhof, chair of Calvin’s board of trustees.

“His passion for, and defense of, our confessions and the Reformed identity and mission of Calvin College, in my mind, outweigh the obvious physical improvements—because if we don’t hold true to those foundational beliefs, it doesn’t really make a difference what we build.”

Born in 1948 in northwest Iowa, Byker was raised in Hudsonville, Mich., and attended Unity Christian High School. He enrolled at Calvin in 1966. “I went to Calvin for about six weeks, and then I quit,” Byker said. “I was not anxious to be in school … and the alternative at that point was to be in the Army … I was the son of a highly decorated World War II veteran, and I thought the Army was a respectable thing and, also, that it would probably be good for me.” Byker served as a nuclear weapons officer at Fort Lewis, Wash., and as a forward observer and battery executive officer in Vietnam; he was repeatedly decorated for his service.

Following his discharge from active duty in 1970, Byker married Susan Lemmen ’71, a Calvin education student he had dated since high school, and resumed his own Calvin education. Forgoing a typical course of study, Byker created an interdisciplinary major in English, philosophy and speech (and the equivalent of a minor in Russian language and literature). While at Calvin, he and Susan served as the resident directors for the Bolt-Heyns residence hall.

In 1982, the Bykers accepted the invitation of one of Gaylen’s professors to move to Lebanon to work on the rebuilding of that country following its seven-year civil war. The couple lived and taught in Beirut—Byker at the American University of Beirut, and Susan at that school’s International College—until the war flared up again, and the situation proved too dangerous for them to remain.

In 1985, the Bykers relocated to New York, where Susan worked at the United Nations International School, and Byker worked in international finance, first at Chase Manhattan Bank and then at Banque Paribas.

Wherever his career took him, Byker maintained a strong relationship with his alma mater, teaching classes, serving as a recruiting coordinator and hosting interim classes. From 1991 through 1995, he served as a member of the steering committee for the first capital campaign for Calvin College.

With a year to go on that effort, the presidential search committee called. What appealed to him about the job, Byker confessed, was the opportunity to apply fresh, creative energy to Calvin’s mission. “Reformed Christian liberal arts education is a wonderful place to have significant impact every year through the lives of thousands of students and hundreds of faculty and staff,” he said.

“Gaylen brought an energy to the position that filtered down to everyone who worked for him and with him,” said senior associate to the president Bob Berkhof. “There was never a dull moment.”

One of Byker’s first undertakings as president was to lead a team in drafting a new strategic plan for Calvin, outlining goals to strengthen the college’s academics, research and scholarship, financial base, physical plant and international reach.

“President Byker made the academic work here the first priority,” said former Calvin provost Joel Carpenter. “He cared deeply about improving the academic quality and vigor of the college. He wanted to be sure that we had the best faculty members available, and that we gave them the resources they needed to do their best work.” Under Byker’s leadership, funding for sabbaticals and for Calvin Research Fellowships doubled, and external funding for research, curricular development and community partnerships grew substantially.

To give research and scholarship an even larger presence at Calvin, Byker helped to create centers, institutes and academic chairs, each focusing a Reformed Christian lens on some area of scholarship. “Every time he got someone to agree to fund an academic program, or a research institute, or an endowed chair, he would come over to my office to announce it and celebrate,” Carpenter said. “Then he would shout, ‘And who said that money for scholars’ work is the hardest money to raise!’”

One of Byker’s key achievements is putting the college on a sound financial basis, said communications arts and sciences professor Quentin Schultze. “He did a lot of this groundbreaking financial work at a time when the economy wasn’t so good,” Schultze said.

The three last-named facilities were components of the 2003–2009 capital campaign: No greater task: hearts and minds renewing God’s world. The six-year, $155 million campaign also built Calvin’s endowment for scholarships and financial aid, research and scholarship and campus maintenance and renovation.

“He is one of the most outstanding fundraisers that I’ve ever worked with,” said former Calvin board president Milt Kuyers. “He has developed relationships with people who are extremely supportive of the way Calvin is being directed and run.”

Byker also traveled extensively and hosted international guests at Calvin to foster Calvin’s global partnerships: “He’ll go over to Indonesia to give a commencement address, and he researches everything about that institution, seeing what they’re doing and if we can adopt what they’re doing or if we can partner with them,” said Calvin chaplain Mary Hulst. “Part of his joy as a college president is that he gets to meet all different kinds of people from all over the world. And I can see he just delights in that.”

Byker said some of his fondest Calvin memories are the experiences he’s had attending nearly 200 January Series lectures and hosting luncheons for the guest speakers and sponsors at DeWit Manor. “You know, it’s a great opportunity to let people know what’s going on at Calvin,” he said, “but it’s also a great opportunity to get to know what’s important to them.” Altogether, he figures, the manor has welcomed more than 33,000 guests since 1995.

Byker also enjoys meeting with Calvin students, and entertaining them. He has appeared perennially in videos for Airband, Calvin’s annual lip-synching contest (and in videos for staff appreciation and other events), singing everything from The Lonely Goatherd to Close to You.

“The rest of us in those Airband videos would have backed out except for his zeal in leading the way,” said vice president for student life Shirley Hoogstra. “And he was leading as Elvis and ZZ Top. He kind of forgets himself when he’s in those situations. And the students love it.”

Hoogstra praised Byker’s commitment to the spiritual formation of students, one example of which was his heading of one of the study groups last September during Calvin’s campus-wide Philippians Bible study. “He asked hard questions, and he was a mentor in a way that very few people see,” she said. Hoogstra also admires how Byker led the college through difficult issues. He’s a decisive person. Even if you disagreed with him, you could count on him to identify the principles that were involved and then make the decision based on principals,” she said.

“He had no problem with disagreement,” said Schultze. “He loved a good argument. He and I could disagree about almost anything and remain friends because we respected each other.”

President Byker is Calvin’s biggest admirer, said Hulst: “Watching the joy that he had, talking about the college, bragging about the faculty members and bragging on the students—it really comes so naturally to him,” she said. “He really sees his mission as helping this place flourish.

Byker maintains that his job has always been to fulfill Calvin’s mission: “Some people put too much emphasis on the building projects and not enough on what I call the human infrastructure, the mission, the fidelity to the mission,” he said. “Think of graduation. You’ve got 900 people going out to do amazing things. And you’ve got 320 faculty doing wonderful things.”

That Calvin’s mission remain distinctively Reformed is crucial, Byker added. “I think a lot of colleges go in a series of steps away from their missions, and I think the first one is to be generically Christian,” he said. He hopes his successor will value the importance of Calvin’s Reformed identity.  “Hopefully, what’s coming next is a more effective and better-integrated expression of the mission,” he said.

Byker is grateful for the many people who partnered with him to lead at Calvin. “It’s a team effort,” he emphasized. “We have a great team.”

Following his retirement in June of 2012, Byker plans to take at least a year to spend time with his family, including daughters Tanya and Gayle and grandchildren Bastian; 11, Eva; 9, and Johannes, 1. He and Susan also plan to do extensive traveling.

“When I came, I told the board I’d commit to seven years, thinking it would probably be 10,” he said. “Sixteen years later, I’ve surprised even myself.” 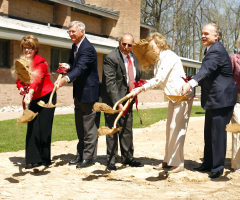 At the groundbreaking for the Spoelhof Fieldhouse Complex 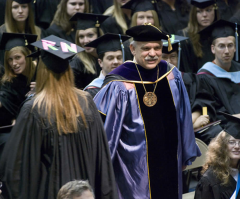 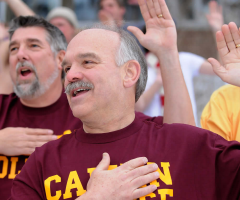 Before jumping in the Sem Pond in 2010 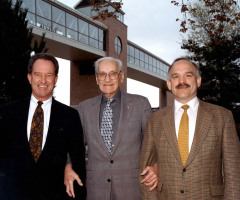 In February of 2004, Calvin director of exhibitions Joel Zwart received an e-mail from President Byker asking him to take a look at a museum website featuring an exhibition of Nabataean archaeology. Byker wanted to know what Zwart thought about bringing the exhibition to Calvin. As he was drafting a reply, telling the president why it would be virtually impossible to host the show, Zwart was interrupted by Byker. “He stopped by my office, and I could tell he was extremely excited and prepared to make this happen,” Zwart said, “and at that point, I deleted the unfinished e-mail and never spoke of it again.”

The exhibition was Petra: Lost City of Stone, the most comprehensive exhibition of Nabataean culture ever assembled, and bringing it to Calvin from April 4 through August 15, 2005, meant remodeling the Prince Conference Center as a museum, sponsoring a lecture series of archaeologists who worked in Jordan, hosting an array of Middle Eastern-themed events and creating a Middle eastern café and shop. The Calvin edition of Petra, which staff and faculty from every Calvin department worked on, saw 63,000 visitors.

“Petra was a phenomenal experience for Calvin College,” said senior associate to the president Bob Berkhof.

A month after Petra opened, Calvin hosted then-President of the United States George Bush as the college’s Commencement speaker, an undertaking that involved significant security and public relations issues. And, again, it required the work of many Calvin personnel. It was characteristic of Byker to be undaunted by big projects like Petra and the 2005 Commencement, said vice president for student life Shirley Hoogstra: “I’m going to miss his expansive spirit …,” she said. “Most of the time, it was, ‘We can do it."