Learning to cook with Marie Catrib 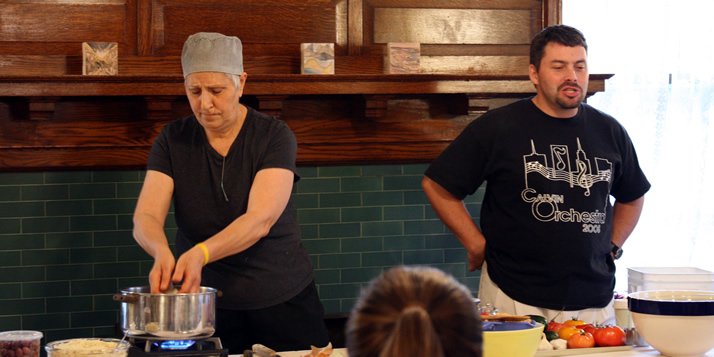 Among the many things that Calvin students learned at a cooking demonstration with local restauranteur Marie Catrib is that there is no such thing as too much garlic.

Calvin’s upperclassmen, most of whom don’t have meal plans and assume responsibility for their own food, were invited to the Koinonia House, an intentional living Project Neighborhood community, at the corner of Lake Drive and Auburn. Those that moved quickly enough to reserve a spot at "Beyond Mac and Cheese: Cooking with Marie Catrib” added some new recipes to their repertoire—and a few new ingredients.

"What’s a kalermati?” asked one student as Marie chopped something slippery and dark red on her cutting board.

"Ah! A kalamata!” she answered, laughing. “It’s an olive. It’s so good—but be careful—they’re very salty.”

The students crammed into rows of chairs and the few couches in Koinonia’s living room laughed heartily at the mispronunciation and Marie’s reply.

"What exactly is orzo?” asked another student about one of the ingredients joining the kalamata olives in a salad Marie was making. “Is it rice?”

"No, it’s not rice—it just looks like rice. It’s tiny pasta,” explained Marie as she scraped the olives into the huge salad bowl.

No one asked about the pile of off-white bulbs Marie deftly minced while talking about her experience as a chef and restaurant owner. It was Marie’s favorite ingredient: “We use so much of this stuff in that place over there…” she said pointing her head towards her restaurant just down the street from Koinonia house. “…our middle name should be ‘Garlic’. Ha!”

Marie, whose eponymous restaurant features many one-of-a-kind culinary creations, urged the students to be bold when it comes to cooking: “Don’t be too shy in the kitchen!” she told them over and over again. She added to this by telling them about her own progress in the kitchen. “My cooking was horrible! I didn’t even want to eat it myself,” she said of the meals she made after immigrating to Michigan from Lebanon.

Her cooking was so bad, Marie said, that she had to ask relatives in Lebanon to send her cooking instructions. With their help from afar, her cooking improved. It improved so much, in fact, that she opened her own restaurant in Houghton, Michigan. Several years later, she sold her business in Houghton, entered culinary art school in New York—training as a pastry chef at the Biltmore Estate in Ashville, North Carolina—and finally ended up in Grand Rapids, near her son. She opened Marie Catrib’s at the corner of Diamond and Lake the day after Thanksgiving in 2004.

Students asked Marie about recipe ingredients, using local fruits, vegetables and meat in her cooking, and building a LEED-certified restaurant, but soon enough it was time to stop talking and start making food of their own. Some gathered around the demonstration table to make their version of Marie’s orzo pasta salad while others left for the kitchen to work on dessert—chocolate chip cookies. It wasn’t long before a complete meal was ready and one task remained: to eat! Folding tables were set up and the large group sat down to enjoy the meal they’d made with Marie’s help.

It wasn’t the first time a large group gathered to eat a meal at the Koinonia House. The students and mentors there share several meals each week, with a team of two planning, shopping and cooking for the other members of the house. Friday night is community dinner night when students invite friends, family, professors and neighbors over for a meal in which up to 30 people gather around Koinonia’s massive dining room table and satellite tables set up nearby.

Food is important to the students who live at the Koinonia house, said Project Neighborhood mentor Jeff Schra, not only for the sake of the food itself, but because of what it does for them.

"The idea of gathering for a meal is fundamental to who we are … and really to what the church is. It’s the Acts 2 idea of the early Christians sharing what they had together, with ‘every meal a celebration,’” he said.

It was in this spirit that the Koinonia house asked Marie to hold a cooking demonstration in their living room and invited Calvin students from the community to join them for the evening of food and fun.

"To have Marie come and invite other students from the community to learn outside the classroom and also see what a local entrepreneur is doing…fits what we’re doing as a house,” said Schra. “It was important for me to see the students getting their hands dirty, so to speak.”

Not to worry—before students got their hands dirty, following Marie’s instructions to “just use your hands to mix it!”, they lined up by Koinonia’s downstairs bathroom to wash them.

A taste from Marie

The following recipe is an approximation of what Marie Catrib showed students during her cooking demonstration.

Mix together the following ingredients in proportions to your taste:

Add the following ingredients to taste: