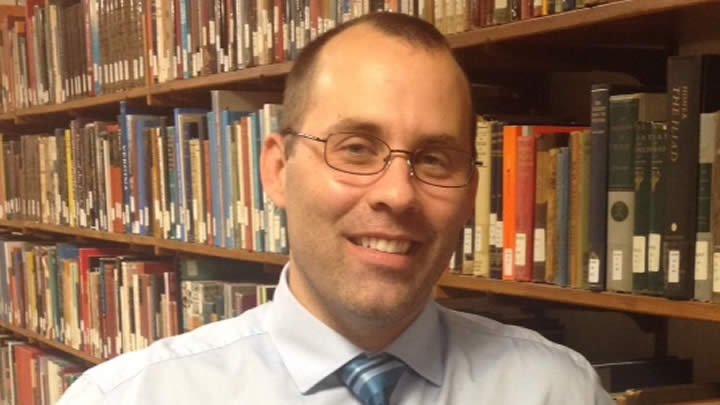 “Imagine learning piano by only studying the score, by studying only the notes and never laying your hands on the keys. Or what if you learned to swim by studying buoyancy and how a life jacket works?” said David Noe, Calvin classics professor.

Such was comparable to how one learned Latin, until recently.

Noe, of late, has been taking advantage of a movement in the academic community to teach Latin as a spoken language. With the support of his colleagues and administration, next year’s Latin Introductory class will be taught verbally.

“This method [verbal Latin instruction], to follow the analogy, throws them into the water. And then teaches them the grammar,” he said. “Up until 1850 all Latin instruction was verbal. That was how it was taught. But until just recently you couldn’t teach Latin verbally. Now there’s been a resurgence of interest in doing so.”

“The idea is to try to get people using the language as soon as possible. The deductive method used to teach Latin is slow and painful. The inductive way is used in Spanish, French and German. There’s been a movement of people recently to teach Latin by immersion,” said Noe.

In recognition of his work, Noe has received a prestigious grant from the Society for Classical Studies (SCS).

According to their website, “The Society for Classical Studies (SCS) American Philological Association was founded by ‘professors, friends, and patrons of linguistic science’. The Society’s goal is to advance knowledge, understanding, and appreciation of the ancient Greek and Roman world and its enduring value.”

This grant will help offset the cost of the Biduum Latinum Calvinianum, a two-day Latin conference hosted by the Calvin classics department next fall. This will be an opportunity for Latin students of all levels to practice and learn more about spoken Latin in a relaxed setting. The sessions will be taught entirely in Latin, equipping learners with basic vocabulary to help communication and understanding.

This conference will give learners the chance to improve their spoken skill, though Latin is one of the less popular language options among students. Noe cited impracticality as one of the largest reasons for not studying Latin. “We want to show people that things they consider impractical are still worth doing,” he said. “People don’t judge movies on their practicality, they judge them on their enjoyment.”

Noe hopes students will consider Latin with questions such as, “Do we enjoy it? Is it beautiful? Does it reflect God’s creativity?” He hopes this conference will “persuade people that Latin is a living language.” Because, he said, “Speaking and learning it is not only beneficial, but enjoyable.”