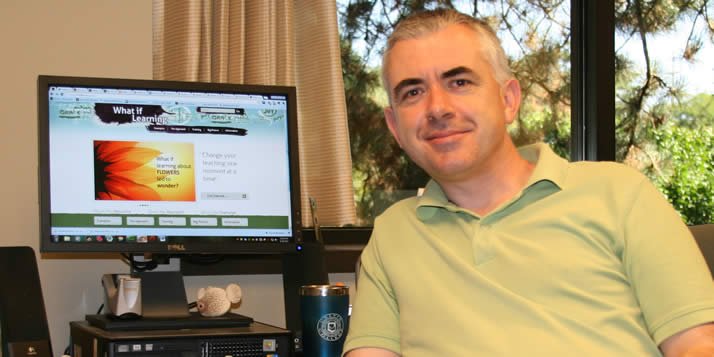 A new website from the Kuyers Institute puts the giving in math, the community in history and the wonder in flowers.

“What if learning about flowers led to wonder?” reads a website banner, and the banner leads to a teaching example: A teacher asks her students to bring flowers to science class and instructs them to count the numbers of sepals, petals, stamens, stigmas and seeds in each bloom. She then demonstrates that the numbers the children arrive at invariably correspond to the Fibonacci Sequence: a famous number sequence. “Is it just an accident,” the teacher asks, “or does it suggest … that there is a Creator with a plan and purpose for everything, even something as small as a seed?”

The lesson in wonder is one of 100 such examples of teachers connecting their faith with their teaching on www.whatiflearning.com, the site launched in the spring of this year by the Kuyers Institute for Christian Teaching and Learning. “What we think we’ve done is create a fairly revolutionary new resource which provides concrete ways of showing teachers how to make their teaching more Christian—without having to read the theory first,” said the institute’s chair, David Smith.

Each example leads off with a question: “What if a grammar lesson challenged selfishness?” “What if success in math depended upon forgiveness?” “What if history could inspire students to love their city?” The site also provides tabs labeled “The Approach,” “Training,” “Big Picture,” and “Information,” where teachers can learn how to apply what they’ve learned in their classrooms.

“The website helps teachers ask key questions and make strategic decisions, not only about what to teach but about how to teach,” said Matt Walhout, Calvin’s dean for research and scholarship. “It relates specific topics like language, history, and math to the overarching Christian principles of faith, hope, and love.”

The site encourages browsing: “Every part of the site links to every other part of the site,” Smith said. “It’s meant to teach you inductively to think about learning in a certain way.” The goal for whatiflearning.com, he said, is to enable teachers to connect their faith with how they teach: “It’s probably the most important thing we’ve done in terms of its potential to influence a large cross-section of teachers.”

It is all too easy to think of Christian education in terms of content and miss what is being said by the process, Smith said. He gives an example from his own discipline: “If I say, ‘Love your neighbor,’ in my German classroom, and all of the sentences my students come up with start with ‘I,’ we have a problem,” he said.

The audience for whatiflearning.com, Smith said, is everyone: from a teacher in a village in the global south to a teacher in an Anglican school, and from a deeply engaged Christian teacher to one who attends church only at Christmas. Smith hopes the site (whose content is free and requires no membership) will be the means of reaching large groups of teachers at the same time. Whatiflearning.com is not a resource bank, he emphasized, but a training tool. “It contains everything you need to run a training event.”

The challenge for the people who created whatiflearning.com was to devise a pedagogy that shapes the shaping. To do that, they needed to find concrete starting points. “Not all Christian teachers learn best by starting with theory or philosophy,” Smith said. “(We’re) trying to sort of invert the pyramid. (We’re) trying to catch people who work from the concrete to the abstract.”

The whatiflearning.com officially kicked off two years ago when educators from the U.S., England and Australia gathered in a conference room at the Kuyers Institute to volley ideas. The site—co-sponsored by the Kuyers Institute, Transforming Lives Project in the UK, and the Anglican Education Commission in Sydney, Australia—was authored by Smith and other writers, drawing on the group’s wisdom.

“This is an amazing resource for Christian teachers who want their students to excel both in traditional content areas and in understanding the big picture,” Walhout said. “A lot of careful thought has gone into this, and the Kuyers Institute team should be congratulated heartily. They have delivered something truly worthwhile and are offering it for free to anyone with an Internet connection.”

The site already hosts 2,000 visitors a month. “That’s already more readers than for some books we put out,” Smith said. There is also a U.K. version of whatiflearning.com, which launched in February at England’s Westminster Abbey, and translators are already 35 pages into producing a German version of the site. Smith is hopeful that the content of whatiflearning will prove useful in many cultures: “We’d at least like to do a Spanish version for Central and South American schools,” he said. “I think a French version might be useful in Africa.”