Keeping Asia at the forefront 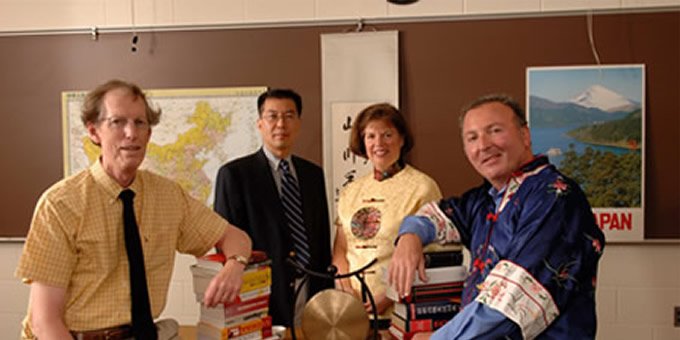 When Calvin College established an Asian Studies minor in 2001, professor of history Dan Bays, an Asia specialist, said simply: "Ignorance of Asia is not an option for the 21st century."

When Calvin College established an Asian Studies minor in 2001, professor of history Dan Bays, an Asia specialist, said simply: “Ignorance of Asia is not an option for the 21st century.”

Now, seven years later, Bays is even more convinced of the truth of those words.

Awareness of Asia has increased significantly this decade among North Americans, he said, but understanding of the populous continent has not kept pace.

“We hear a lot more about Asia,” he said, “but a lot of what we hear is the scary stuff. We see and read things that make Asia, particularly China, seem like a threat. They're the country that's going to take all of our jobs. There's some truth to it—we have lost jobs to China—but that's a partial picture. What we hope to do (at Calvin) with Asian Studies is educate students who understand the bigger picture, including what Asia has been and what it is becoming.”

Calvin’s Asian Studies program got an assist in that effort this month with a $100,000 grant from the Vermont-based Freeman Foundation. In addition the foundation will give the college another $100,000 for a second year if Calvin can raise $100,000 in matching funds for the third year.

This is not the first time that Asian Studies at Calvin, which now includes a major, a minor and a semester in China, has received funding from Freeman. In fact in 2002 the foundation gave Calvin a grant of $800,000, funds which helped launch the program.

Bays, who now serves as both a professor of history at Calvin and the director of the Asian Studies program, said the foundation's most recent gift will enhance Calvin's Asian offerings in several key areas.

“We really want to provide more opportunities for Calvin students to have an extended stay in China, Japan or Korea during their years at Calvin,” he said. “We also want to expand our course offerings in departments where additional coverage is needed-including places like business, political science, the social sciences—and we want to continue our outreach to the West Michigan community.”

Bays said that of the $300,000 in new funds to be added to the program, almost half will go toward direct support for student travel.

“Making such opportunities available to students is a priority,” he said. “Firsthand experience living, working and learning in Asia provides a key avenue to understanding and appreciating Asian cultures and languages.”

Those experiences, he added, have a direct connection to students' job prospects.

Bays noted that Detroit-based General Motors, which in 2007 sold more than one million vehicles in China, up almost 20 percent from the year before, is the biggest foreign automaker in that country.

“The China market has been a dream, and partly a fantasy, of Western businessmen for a couple of centuries,” said Bays, “but things are changing in China. Go into any (Chinese) drugstore and notice that all the toothpaste, all the shampoo is from U.S. companies like Proctor & Gamble. Countries like China are very receptive to foreign business, and living and working there helps our students get a better understanding for that reality. We ignore that at our own peril.”

Or, as U.S. President George W. Bush said of China during a mid-August Olympics interview with NBC's Bob Costas: “This is a big, important nation.”

Calvin professor of business Leonard Van Drunen hopes to take a passel of students to China in January 2009 for a new interim he is team teaching with engineering professor April Si called “Business and Engineering in China.”

Van Drunen said that his goal is for the Calvin students to learn why China has a comparative advantage in many types of manufacturing and how some U.S. firms have responded to that.

“Students will learn what type of engineering is done well in China," he said. “Students also will learn how China's rapid growth has impacted the environment. And they will learn about the history and culture of China and how this has shaped modern events."

Program is more than just China

And while China is a significant focal point for what Calvin is doing with student internships, course offerings and more, Bays is quick to point out that Calvin’s program is not China studies, but rather Asian studies.

Calvin offers four years of language and cultural instruction in both Chinese and Japanese with both tracks under the guidance of Larry Herzberg, professor of Asian language and culture at the college since 1984. Calvin also offers students several internships in Japan each summer.

In recent years, Bays said, Calvin has nurtured increasingly significant relationships with Korea and hopes to offer, beginning in 2009-2010, classes in both Korean language and Korean culture.

The addition of an increased focus on Korea is especially exciting to Bays, who has taught a class at Calvin on the history of the Korean War for almost a decade.

“Among our international students, students of Korean and Korean American heritage make up the single largest contingent on campus,” he said, “yet Korea in general is still somewhat overlooked. We are eager to expand to include Korean language instruction as well as an interdisciplinary course that focuses on Korean thought and culture. We have a gift from a Korean-American family to begin teaching Korean, and we want to build on that to create better coverage of Korean society as well. The Freeman funding will allow us to do so.”

Bays added that Calvin also received a gift to fund an annual Korean studies distinguished lecture series and inaugurated that series in the spring of 2008 with a talk by Stephen Linton, an expert on North Korea.

Outreach in west Michigan to expand

Calvin also hopes to expand its outreach efforts in west Michigan via the recent Freeman funds. A 60-minute video in which Chinese from all walks of life were interviewed by Asian language professors Larry and Qin Herzberg will be distributed to area K-12 schools, colleges, arts organizations and other civic organizations.

In addition Calvin is planning a basic five- or six-week evening class on China (or Asia more generally) for the community with a focus on Asian life, culture and business customs. Bays said the class possibly would use the recent video, as well as the China Survival Guide, a handbook written by the Herzbergs, designed to assist travelers to China with business and social etiquette, local customs and more.

Bays said that student response to Asian Studies courses is a good indicator of the success of the program.

Program is on solid ground

“Our program is on a firm footing,” said Bays, “and students are really taking advantage of it. We have 50 majors and many more students who take at least a class or two in a language or one of the culture classes. We give a good, well-rounded education to our majors and our minors too. This is a program that, to me, gets at the heart of what Calvin is all about.

“Our language courses top out each fall,” he said, “and the great majority of those students take the second-semester class. There is virtually no attrition. The same is true from first year to second year. It's gratifying to see the students respond to what we're doing in Asian Studies.”

Senior Donnie Cottingham, an information systems major and a Chinese language minor, wants to learn everything he can about China so he can work there some day. With the help of a $4,500 Gilman scholarship, he'll make a step in that direction by studying there this fall with Calvin's China semester program.

Professor of Asian languages Larry Herzberg and his wife created a documentary to get Americans up to speed with China's recent modernizations. Read about it, and watch a clip from the video.