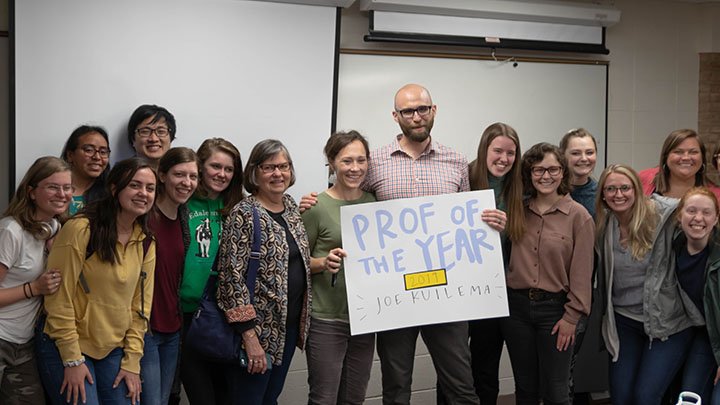 Six years ago professor Joe Kuilema was faced with a very real tragedy, one that compelled him to seek answers: A young man he had mentored was shot in the alley just a half a mile from Kuilema’s house.

“For many years it has driven me to try to understand why and how he was murdered; particularly, how a young man who grew up in the same city as I did could have such a vastly different experience of it,” said Kuilema. “It  provided me with my own opportunity to think deeply and consider what it means to act justly.”

As a social work professor at Calvin, Kuilema has made struggling with real world issues like this central to his life and teaching. He has challenged students to do the same.

And students have responded ardently in his classes. And also outside class, including voting Kuilema the 2019 professor of the year.

“Professor Kuilema teaches like there are real things at stake,” said senior Lyric Floria. “He doesn’t seek to prepare us for ‘the real world’ after college; he challenges us to see the real world that is all around us, all the time, and to bravely step into the uncomfortable places.”

Curiosity is the beginning

Kuilema believes it all begins with curiosity. “I encourage students to be curious about the world they find themselves in,” he said. “Whether that’s in Grand Rapids in my interim class about race and place or whether that’s in a semester or interim in Liberia or Ghana. Ideally, curiosity leads to empathy, you’re able to put yourself in their shoes, and that’s what drives justice.”

Such was the case for junior Andrea Jordan, who spent the 2018 spring semester in Ghana with Kuilema at the helm. “The amount of knowledge he has is incredible, but what I admire the most is his humility and openness to learn from his students,” she said. “He is a constant reminder to me that I have a role in speaking up and fighting against injustice wherever I am.”

Kuilema teaches this in the classroom, but carries it beyond the doors, too, his students said.

“I think the most admirable thing about Professor Kuilema is that he really leads by example,” said junior Danielle Frempong. “He expects his students to wrestle with the ideas he presents, and he holds himself to the same standard of excellence. Outside of the classroom, he never allows himself to sit on the fence about important issues. He is the embodiment of excellence, justice, and compassion.”

Teaching the capstone course in the social work department, which focuses on the integration of faith and social work, is a highlight for Kuilema, he said.

“One of my great joys is teaching students how they can integrate faith with the people God is calling them to be in the world,” he said. “It is a tremendous opportunity.”

“Professor Kuilema has challenged us to come face to face with the deep, intricate, and interconnected sinfulness of the world, and given us the space to wrestle with fundamental questions that have pushed our self-centeredness to the side in order to put Christ and the embrace of others it its place," said senior Santia Casagrand.  His classes … are life changing.”

Kuilema’s reach goes beyond the Knollcrest campus to Calvin’s Handlon campus, where he taught a class for the Calvin Prison Initiative (CPI) this spring.

“It was enormously rewarding to teach a group of men who understand these issues at such a deep level,” he said. “It’s an intense environment in which to talk about institutional racism, and the failures of affordable housing and mass incarceration; here you’re talking to people for whom these are not abstract ideas.”

“Professor Kuilema presented issues that many of us struggle to come to terms with (privilege, power, race) in a way that was not accusatory,” said CPI student Shawn England. “Instead, these issues became part of a common struggle to recognize the way our systems are marred by sin and wrestle with ways we all, together, can overcome inequalities and help our brothers and sisters who have become marginalized and oppressed.”

Added CPI senior David Payne: “Though I am a minority student, I never felt dismissed, marginalized, or invisible in Dr. Kuilema’s classroom. To the contrary, I felt like I had a voice; like I was given a seat at the table… . Overall, I think his ability to negotiate structural racism within a multiracial setting is a desperately needed skill in our country’s unstable racial climate and should be coveted by any institution of higher learning.”

As for Calvin senior Jordan Pine, she hopes to continue to be influenced by Kuilema even after she graduates.

“What makes him one of the most quality people I know is his never-failing fight for justice,” she said. “He has not become hardened by the vast amount of brokenness in the world. Rather he continually steps into spaces of pain and suffering. He allows other people’s stories to deeply impact him and shape how he lives life … . As I graduate, I hope to follow in his steps of listening well, seeking out truth, advocating for others, and clinging to hope in the midst of incredible brokenness.