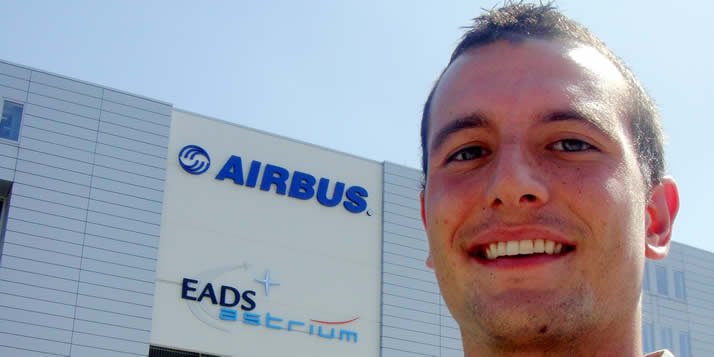 Steven Brink spent a summer working in Bremen at Airbus.

"I thought I had everything I wanted at home,” he admitted.

Now, Brink is completing his second summer internship in Bremen, Germany, this time for airplane manufacturer Airbus. And he’s considering full-time work overseas after the internship ends. Brink looks back at that summer 2007 experience as a turning point in his life.

"I absolutely loved Bremen and Germany,” he said, “and I knew I wanted to get back to Germany.”

Opening up a global perspective on life

His summer has been great, Brink said—just being in Europe for the World Cup was amazing—and the best part of it was meeting people from all over the world and trying to communicate with multiple languages every day.

"It is also interesting to understand where people come from, their past experiences and why they believe what they do—interesting to see how others view the United States and our politics, but also their own country.”

His fluency in German has also been a plus, Brinks said.

"It means a lot to people from other countries if you try to learn and understand their language and culture,” he said. “Taking language classes at Calvin and my international experiences with the engineering program have prepared me extremely well for my internship.”

Early years at Calvin were a struggle

His European adventures marked a turning point in his education for Brink, a Dyer, Ind., native. Although the decision to come to Calvin was an easy one (his parents are alumni, and he was impressed with Calvin’s academic credentials), he struggled in his first two years.

"I initially entered the Calvin engineering program not knowing what to expect,” he recalled. “We had to pick a major, and I was strong in math and sciences, so I thought engineering was a good fit. Calvin seemed to have a great engineering program that was getting better each year, so I decided to give it a try.”

Brink said his first two years in the program were more difficult than he had anticipated, and he considered many times switching to another major. But the summer 2007 experience in Bremen, he said now, was the key to a renewed sense of motivation he felt at the end of that summer.

Brink interned at Steelcase during the summers of 2008 and 2009, which prevented him from returning to Germany. This summer, after graduating from Calvin in May with a bachelor of science in engineering degree (with an international mechanical concentration) and a business minor, Brink worked his way back to Bremen and the Airbus internship, secured via Calvin professor Ned Nielsen.

In addition to having the time of his life, Brink is also gaining valuable work experience. He’s assigned to the Airbus A380 customized-cargo engineering division, which designs cargo configurations for customers who buy the Airbus A380, the largest passenger airliner in the world.

Brink explained: “When an airline customer, say Quantas, for example, is buying a plane, they have an endless amount of choices that they can make in terms of how they configure the plane. For the cargo compartment alone, they can choose from a number of pre-designed assemblies, or they can make suggestions or demands for specialized designs.”  Brink is currently working with suppliers in the U.S. to ensure that Airbus parts are being produced to specifications and being tested to the correct standards and continually working with them to make improvements.

Because it is an international company, the official language of Airbus is English, Brink said. But in his division much of the daily work takes place in German, so his fluency in both languages is coming in handy.

"It is impossible to understand how large companies operate while studying in the classroom,” he said. “But this summer I am learning how to interact with many languages and cultures every day at work, something that is a struggle and takes time to get used to because technical engineering terms are often hard to explain. I also am learning a lot about the airline industry and all its regulations. And I am learning subtle business aspects of multinational corporations.”

Brink’s experiences overseas are exactly what Calvin engineering professor Ned Nielsen hoped for when, following a long career in industry, he joined the department and began expanding its reach beyond west Michigan. Nielsen began the international internship program 12 years ago and the Bremen program in 2006.

"We have had interns in the Netherlands, Germany, Switzerland and Puerto Rico,” he said, “and they were all placed in internships in their field of study. Without exception, the students have told me that these placements were life-changing experiences. These internships have also had a very positive impact on many of their careers after graduation.”

With graduation behind him, Brink is excited about an engineering career.

"I have not decided what my plans are after my internship at Airbus is completed," he said, "but my time in Europe has given me many job opportunities all over Germany and other countries.”

He is grateful for the insights he has gained from studying abroad and the relationships he has formed with Calvin professors.

"Not only is it important to have a mentor,” he said, “whether it be at work or school, but it's invaluable to have Christian professors that are approachable and will discuss how their faith has impacted their most difficult ethical questions and decisions, whether it be in industry or everyday life. I'll take that with me wherever I go.”