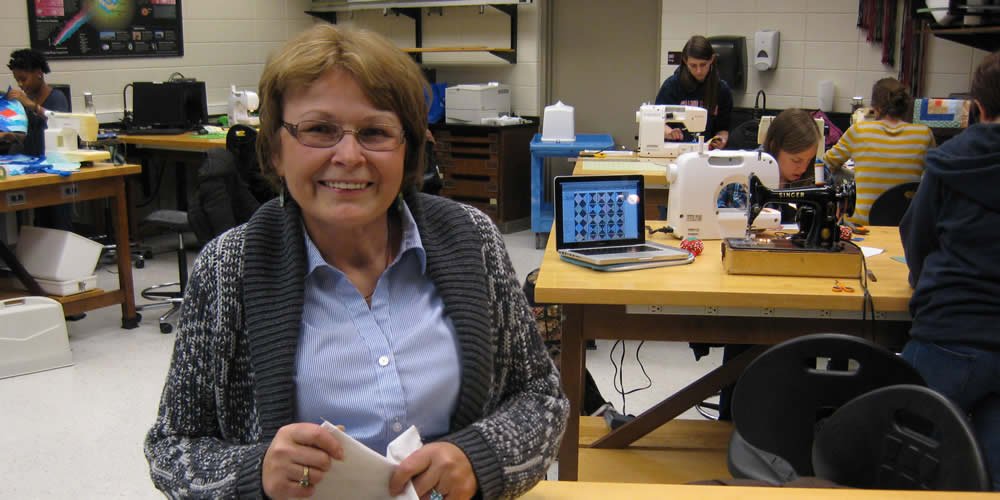 Students in Sandra Clevenger's quilting class are learning more about a social and cultural phenomenon.

Skyler Deckinga's last class at Calvin won't include analyzing a company's financial statements or developing an organization's HR policies. The business major from Chicago is wrapping up her Calvin education learning a different kind of lifelong skill: quilting.

She is one of the lucky ones. The class, "Theory and Practice of Quilting," taught by Spanish professor Sandra Clevenger, was full by noon on the day that registration opened. Clevenger used to teach the class every other year, but due to its popularity, she's now offering it annually.

Knitting, crocheting, sewing, quilting: once seen as antiquated activities for an older generation, these crafty, and often artful, activities have experienced a revival among young people from on-campus knitting groups such as Calvin's own Knit Purl, to popular crafting websites like Etsy.com, to Calvin interim classes. Students don't go to college to learn how to quilt, but the skill of quilting will be one that the 12 students taking Clevenger's interim will value for the rest of their lives.

A history buff, Clevenger grounds the students' practical skill development in a historical context as both a social and cultural phenomenon in the United States. During the first hour of each class session, students examine significant forms of American quilting, such as whole-cloth quilts, pieced quilts and the significance of various patterns. Students gain insight into quilting in both slave and Amish communities, and they study how quilting adapted during historical periods and within various social, ethnic and religious groups.

On day one, students learned about color theory and then were sent out to choose their fabrics independently. By day two, they'd already begun cutting and piecing together their squares, using a log cabin block design that results in a cornucopia of patterns. No two quilts look anything alike, despite their common basic layout of a middle square, the hearth, surrounded by long rectangular strips, the logs.

Students in this year's class brought with them a broad background, including a couple of experienced quilters joined by several who had never sewn a stitch. Some students learned how to sew from a grandma, a mom or a friend's mom. Clevenger had no such guide. She taught herself how to quilt, then discovered classes available through quilting stores.

In one such class on appliqué, she impressed the teacher with her stitching skills, resulting in an invitation to join the Thornapple Country Quilters Bee, a tight-knit group of a dozen, award-winning quilters who share their craft and their lives together. Ladies from the bee will spend a day with the interim class, helping students baste their projects.

By the end of the three-week course, students will have completed their quilts, and each year Clevenger is amazed at what the students accomplish in such a short time period and also by the variety of creativity displayed. Each student's quilt is unique. Perhaps most unusual in this year's class is that of Viva de Oliveira, an international student from Brazil, who designed a pattern that resembles the Brazilian flag. She confused the fabric store employee who cut her green, yellow, white and blue fabric when she exclaimed, "I chose this fabric because Im feeling patriotic."

Meanwhile Skyler Deckinga pieces her quilt together with special attention; she's making it for her mom who suffered a brain aneurysm over Christmas break. Skyler and her mother had planned to tie-dye fabric for the quilt over the holiday break, but when her mother fell ill, they spent time together recuperating instead. Now, while her mom continues to heal, Skyler heals too, creating meaning from scrap fabrics as faith communities before her have done for generations. 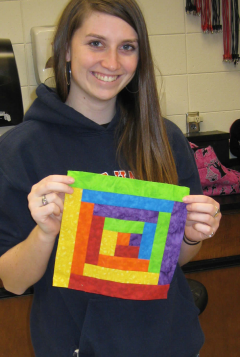 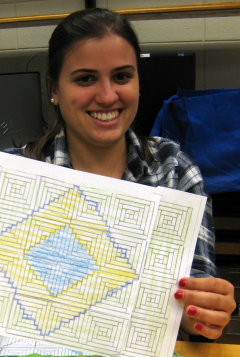