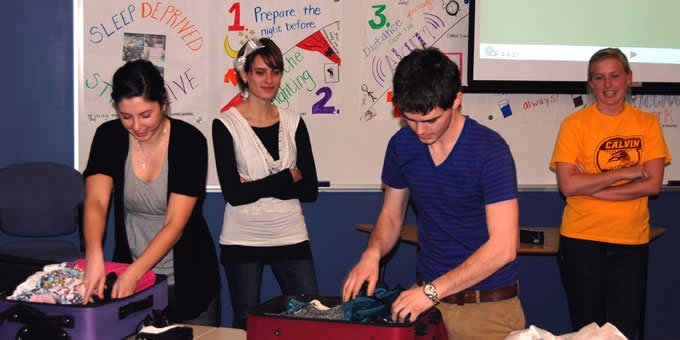 Students compete in a suitcase-packing competition as part of "LifeHacking: Practicing Smarter Living."

What do packing a suitcase, cooking in a crock-pot, organizing a closet and starting your morning off right all have in common?  They’re all lifehacks—and they’re the subjects of student presentations in “LifeHacking: Practicing Smarter Living,” a first-time interim offering this January.

“I’m a little bit obsessive,” explained Calvin computer science professor Victor Norman, a former software engineer who is pioneering the class. “I’m always looking for better ways to do things. I thought that offering this class to students would be helpful because sometimes doing things just a little differently can have an enormous effect on how effective you can be.”

"Lifehacking" is a term that has seeped into discourse in the five years since a technology journalist coined it in 2005. According to Wikipedia, “a lifehack refers to any sort of trick, shortcut, skill or novelty method to increase productivity and efficiency, in all walks of life. Or, in other words, anything that solves an everyday problem in a clever or non-obvious way might be called a life hack.”

The practice of lifehacking has become popular thanks to websites like lifehacker.com, which regularly offers tips on everything from technology usage to personal finance to fitness.

Throughout  the class, students were offered tips on computer add-ons that make your computer run more efficiently, ways to organize your closet to save time and space, even advice on how (and why) to avoid hitting the snooze button to make the morning less stressful. (Hint #1: Buy a really annoying alarm clock.)

Avoiding the snooze button was one pointer senior Brent Burghgraef was planning to put into practice due to the class. “During interim I try to find classes that apply to my life,” he said. “Since this had ‘smarter living’ in the title, it seemed to fit. I’ve found it to be a lot of great advice basically about breaking bad habits and being effective and efficient.”

The class appealed to sophomore Katrina Meppelink because of her previous lack of lifehacking skills. “I am extremely inefficient and unorganized and not real logical,” she said. “It has been pretty interesting so far. I’ve learned that you’re not losing anything by making your life more streamlined; you’re getting the same outcome or better.”

In fact, senior Melissa Van Rooyen found that by making life more efficient and less stressful , she has become more energized, she said.

Resident director Curt Essenburg, who is co-teaching the class, regularly sees students outside the classroom: “I see the way they utilize their time, and they could so improve what they’re doing,” he said. “I keep my inbox at zero. I subscribe to the Ohio method: only handle it once,” he said. “I see a need for this for students, too.”

The idea of lifehacking for Christians should go beyond just smarter, faster, better, though, Norman emphasized. “You don’t want to be in such a rush that you forget what’s most important,” he said. “Sometimes you want to back off and be deliberately ineffective; you need to set the computer aside and work on community, service and hospitality. That’s all a part of this, too.

“The students have been asked to do some self-discovery—to think about areas in their life that they would like to improve on, and they have used that to guide their presentations.”

The presentations have been so helpful that the instructors decided to open them up to the rest of the college community by offering them in public venues around campus.  Said Norman: “We wanted to give students an additional chance to practice their presentation skills and allow others to benefit from them.” 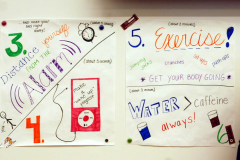 A detail of a student project for "Lifehacking."