Interim course examines the world of Jesus and the Early Church 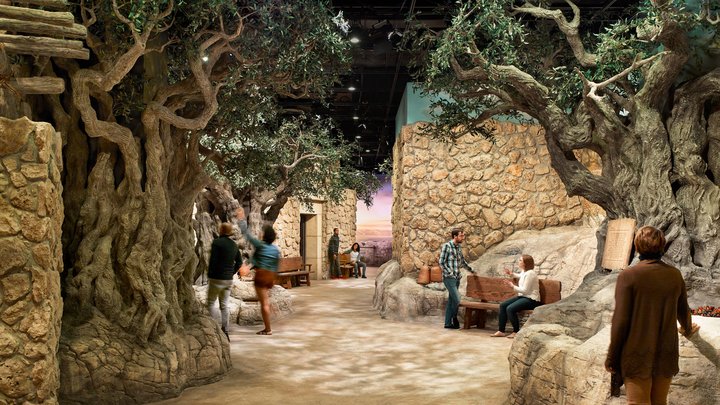 On January 16, Calvin religion department chair and professor Kenneth Pomykala and twelve students embarked on a three-day, 1,300-mile journey to the Museum of the Bible in Washington D.C. This journey was the culmination of 28 hours of class spent engaging deeply with the context of the New Testament in Pomykala’s interim course, The World of Jesus and the First Christians. Surveying the cultures, literatures, and religious traditions of first century Palestine and the Eastern Mediterranean, the course provided students with a broad background for the gospels and the epistles of Paul.

“The world of Jesus and the first Christians is the world of the eastern Mediterranean during the first century CE, a world very different from our own,” said Pomykala. “Reading and interpreting the New Testament within that ancient context can enrich our understanding of its meaning and message.”

Pomykala noted that modern Christians don’t necessarily think of their faith as radical: “as a religion that’s been around for 2000 years and integrated into western culture, we often don’t get this—when Jesus preaches the kingdom of God, what does that mean for the kingdom of Caesar?

“Paul is offering a different form of human society, one not based on hierarchy and exploitation of the non-elites by the elites, but where male and female, Jew and gentile, slave and free are all now one in Christ,” he added. “That’s a radical departure from the Roman political and social order.”

Over the course of three weeks, the twelve-student class has examined early Christian history and geography, the world of early Judaism, and the Greco-Roman world through a multitude of sources. “Interim allows for courses that are a little bit different than a regular semester,” said Pomykala. “In the course, I could devote more time to each of the subjects, and we could also fit in the field trip to the museum.”

Rachel Guikema, a sophomore studying nursing, was surprised by the depth of the course: “I was expecting to examine Jesus and the first Christians at a surface level, learning a bit of history and looking at some scrolls—instead, the class gave me context for the entire New Testament, and this new understanding has enhanced my faith in ways I wasn’t expecting.”

For Guikema, the trip to the Museum of the Bible both made the course material more real and also reinforced its importance: “It’s easy to forget what you’re learning about when you sit in a classroom everyday—seeing the artifacts from that exact time period was awesome and a great reminder.”