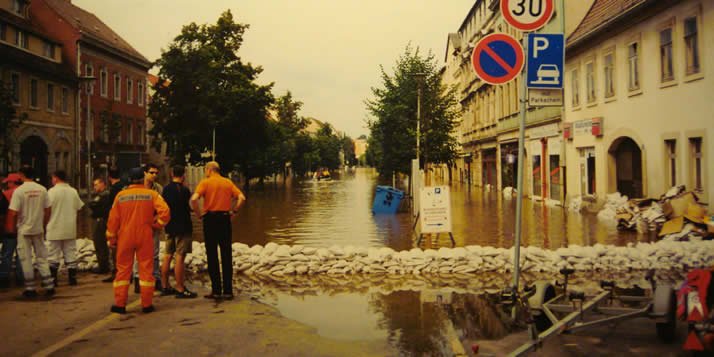 The cleanup effort in Pirna, Germany after the flooding in 2002. (Source: Wikimedia Commons.)

“Okay,” said Patric Spence to his interim class of 15 students, “what did you learn yesterday?”

Hands went up, and as Spence acknowledged them the answers came quickly.

“Radio doesn't go down in a disaster.”

“Women respond to disasters differently than men; they don't ruminate.”

“The information you get right away is often wrong.”

Spence, a third-year communication arts and sciences professor, nodded after each answer and then added a little something of his own—a nuance, an expansion of what the student said, an example from the textbook, Crisis Communication: A Casebook Approach—or from disaster events he's been involved with.

“Good, good,” he said, “and now for today's topic: rumors, cybercrises and conspiracy.”

With that he strode from the front of the room to a computer and monitor and pulled up a Powerpoint presentation. During the next hour he lectured, fleshing out his talk with references to the text, to his own considerable experiences as a consultant and with a number of multimedia examples, including Web sites and video.

The class was titled “Handling Disaster.” Topics for the 15 days included everything from crisis management planning to emergency communication. Spence also covered the Enron scandal, the Tylenol product tampering incident, Hurricane Katrina and the Virginia Tech massacre, the latter two of which he has researched and written about. Indeed he focuses most of his own research on risk and crisis communication.

“I want the students to understand the role of disaster planning for organizations and know the basics of planning for, responding to and recovering from crises,” he said. “I hope that they look at disasters broadly and understand the different and sometimes novel ways in which a disaster could strike. The students should be able to identify organizational vulnerabilities in most fields and respond to them.”

While doing his research, Spence has seen his share of disasters, having worked in disaster planning and relief not only on Katrina, but also on the flooding in Iowa in the summer of 2008 and on several Midwest tornadoes. He also works closely with the Centers for Disease Control and Prevention and FEMA on various projects.

“I have been able to learn from these experiences,” Spence said in an interview after class, “but I also bring these examples to the classroom. The firsthand experience allows for more detailed and specific discussion, and the students seem to appreciate that.”

During his lecture Spence not only referenced his own experiences, he also made good use of the smart classroom in the DeVos Communication Center at Calvin. He used not just the Powerpoint slides, but also several videos from YouTube on conspiracy and a variety of Web sites—everything from spoof sites to consumer-run sites where people can complain about a company or a business.

Mixing things up, Spence said, is important during the regular semester, but even more critical during interim with its schedule of one three-hour class a day for 15 straight days.

“I do try to use a variety of teaching tools and techniques,” he said.

This could include, he said, “the traditional lecture, group discussion, student-led discussion, table-top exercises, simulations and multimedia tools.”

“The more the student is personally involved with the topic,” he said, “the less likely he or she is to tune out.”

Spence also likes the idea that in using information from Web sites, YouTube videos and other internet resources, he is providing places for students to return to and perhaps further examine the issue and example.

“This is a real advantage,” he said, “because until recently students never had the ability—or didn’t easily have the ability—to review media clips that were used in class. It is also good that the students see others reinforcing the message taught in class; it’s a credibility booster.”

After Spence's lecture his students then had their turn at the lectern and the computer, too.

A trio of Calvin students—Wangari Kimiri, Amanda Schupra and Rob Dice—spent 20 minutes each doing presentations, marked by Powerpoint and YouTube videos, on different aspects of rumors: how they begin, how they can damage companies and individuals and how they can be combated. Among the examples used by the students were an author who lied to Oprah, John McCain and the invention of the BlackBerry and the recent Steve Jobs health rumors.

Spence said student presentations are an important part of any class he teaches, including interim.

“At the heart of this (interim class on disasters) is a public relations component,” he said. “Students need to communicate, and communication improves through practice. So students have daily communication assignments in class that help them practice their skills. Also, having student presentations allows diverse opinions and examples to emerge. The students often bring in examples that I never would have considered or they bring in a perspective that is unique and insightful. I enjoy the student participation and presentations because I learn quite a bit from them.”

Halfway through the 15-day interim term, Spence's students were saying so far, so good.

“I love this class,” said Amanda Schupra, a sophomore from Troy, Mich. “It's interesting, and Professor Spence teaches it well due to his many experiences helping in major crises.”

Still deciding on a major (she's thinking either speech pathology or business) Schupra figured the class would be applicable regardless of where life takes her.

“Handling disasters,” she said, “seemed like something that would be useful no matter what your career is. It makes you think about other aspects of life and how to cope with a crisis.”

“The class is great,” he said. “I am glad I took it, and it is giving me insights into how to handle all sorts of situations. Professor Spence makes sure you know your stuff and makes it fun.”

“Being able to pick almost any class and being able to just focus on one,” Schupra said, “is great.”