In her own backyard 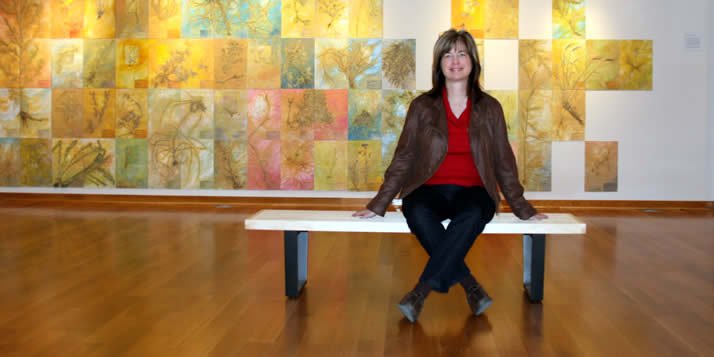 Mary Abma
Mary Abma created a sculptural herbarium of every invasive species in her lawn.

Of the 82 species Mary Abma identified in her backyard, and classfied and pressed and mounted and preserved in wax, only one doesn't have a proper classification: Rice Cut Grass. And because it doesn't, that is her favorite, but not because of the plant. "It's because of the story," she said.

Rice Cut Grass was flourishing in anonymity in Abma's lawn in Sarnia, Ontario until a botanist identified it for her as a rare species. Abma felt honored by the presence of the plant and vowed to make it a part of the complex artwork she was creating. Then a neighbor she described as "pretty much the least environmental person ever," decided to air out his garage rug by flinging it over their shared fence. And the Rice Cut Grass was destroyed before it matured, but Abama preserved it anyway. "It's a mess," she said. The plant expresses one of the themes of her exhibition: "We don't really know what we're doing."

It took three years for Abma to create the herbarium and the other artworks that compose "In My Backyard," on exhibition at the Center Art Gallery from January 6 through February 18, 2012. The herbarium is an inventory of all of the invasive species that grew in her backyard for a year—reinvented as art. "Basically, I was into biodiversity issues," she said. "I wanted to learn about what our own individual responsibility was. I knew plants were her that shouldn't be here."

So Abma, who began her artistic career as a painter, consulted with botanists and other experts who lived near her native soil. She thought that perhaps 50 non-native species lived in her organically maintained yard; eventually she and her consultants identified 82. She let them grow until they had roots, flowers, stems and leaves on them (which is necessary for classification purposes.)Then she spray painted them all the same color. "I wanted to challenged the viewer by taking away everything that was familiar about the plant," she said. Then she covered each plant with wax. "A friend of mine said, 'You didn't just attach these plants. You embalmed them,'" Abma said.

The art of research

While she worked on the plants, Abma was learning all about them. She looked up documents from the 1500s to the 1900s: recipes, medicinal references, poetry, stories, even (in the case of a certain type of shamrock), a song. Non-native plants typically traveled to North America—and the lot adjacent to Abma's "typical raised ranch"—along with immigrants. "People just needed a taste of home," she said. "They were comfort. Some were food. Some were medicines."

Abma began to wonder if her own family might figure in the local history of non-natives. "My ancestor was a farmer in New France. He was an apothecary, and he moved plants around," she said. "I started to wonder if he brought over any of the weeds I've been stepping over in my lawn."

While she was in the middle of creating her herbarium, Abma got a call from her mother who said, "I have an herbarium in my drawer." What she had was a school project made by a great aunt in 1885, a catalogue of 50 species. As Abma examined it, she saw that each plant had left a photo negative of itself on the facing page. The ghostly images inspired her to create lumens (photo imprints) of the species that should be in her yard.

For help in classifying her plants, Abma reached out to Michigan, to biologist Dave Warners, who worked at the college her children attended: Calvin. Warners taught the artist to identify the plants scientifically. "It's important for my work not to do a slapdash job but actually to learn," she said. She created a label for each with the plant's common name, scientific name, family, habitat and date of collection. Abma also added the GPS coordinates for each species. "I have to amuse myself as I work," she explained.

The final piece to Abma's exhibition is a triptych altarpiece, a cabinet from an old printer containing soil and seeds collected from the Calvin campus. The piece was created by Warners' interim class, "Exploring the Arts to Foster Creation Care."

“I thought it was pretty courageous of her to allow the students to create that piece instead of doing it herself because she had to give up control of the work to do that,” Warners said.

Abma has exhibited in Canada, but this is her first show in the U.S.

“I'm most interested to her work because it is rooted in history and biology— it's not simply an artistic presentation of plants,” said Calvin director of exhibitions Joel Zwart. “She has a strong commitment to research and classify the specimens properly, which leads to a very informed vision of how she wants to display the work and how to tell a story.”

Standing in the middle of her exhibition, with the vibrant orange, green and yellow herbarium behind her on a long wall of the Center Art Gallery, Abma took stock again of the plants that are now so familiar: the Lamb's Quarter, the shamrock, the Rice Cut Grass, the wheat. "My husband is so thrilled there is wheat in our yard." She ponders the lesson: "We need to learn or re-learn how to pay attention," Abma said. "We cannot do creation care without paying attention." 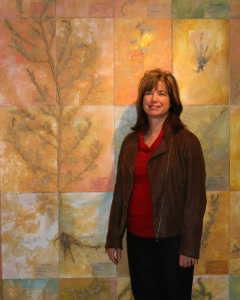