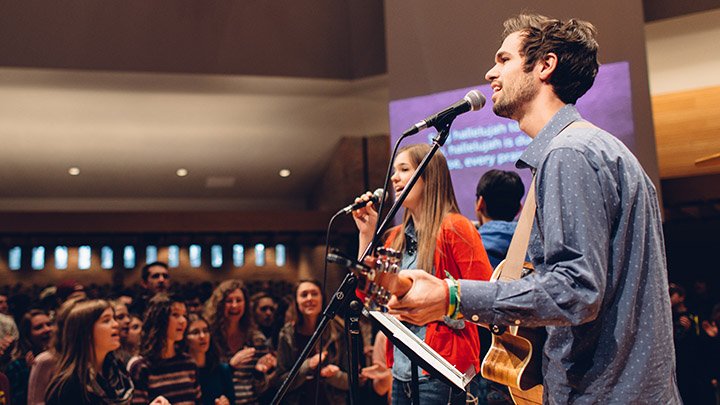 Now 10 years in, more than half of all Hymnary.org users are below the age of 34.

With more than 1.3 million hymns, 6,000 hymnals, and 700,000 users a month, Hymnary.org has grown from a small online collection of just 30 hymnals into the most expansive online hymn database in the world.

Started officially in July of 2008 by Calvin computer science professor Harry Plantinga as an offshoot of his Christian Classics Ethereal Library (CCEL) website, Hymnary.org was at first primarily intended for use by worship leaders and scholars.

When designing the site, Plantinga said, he asked himself, “What does a worship leader do? How do they go about their task? How will they choose hymns? What resources will they want when they come to a hymn?

“Thinking about those tasks [led us to say] we need a search engine, and we need to provide resources like scores, recordings, and background information,” he added.

However, more than half of all Hymnary.org users are now below the age of 34, and, according to Plantinga, the site’s use peaks at 10 a.m. Sunday morning. This suggests that Hymnary may also play a more active role in worship.

Plantinga has a simple explanation for the site’s success: “It’s met a need.”

“People are still using hymns and songs in worship, that’s a key part of worship,” he said, “yet people are moving away from hymnals; roughly speaking, half of churches project rather than using a hymnal in the pew.” He views Hymnary.org as part of the changing approach to worship music: “It’s congregational song translated into the twenty-first century.”

Plantinga has a bold vision for the future of Hymnary.org, including the implementation of machine learning techniques, better multilingual support, greater software versatility, and expanding the site’s currently existing FlexScore tool which allows users to modify the pitch, key, and representation of hymns.

A team of thirteen staff work with Plantinga on Hymnary.org and his other sites. Zach DeCook and Daniel Harold, two Calvin graduates and former student interns who are now full-time staff, have greatly enjoyed working on the Hymnary team.

DeCook described his experience as an intern positively: “It was collaborative; I started by meeting with Dr. Plantinga and talking about what things I wanted to work on.”

He noted that “there was a lot about computer science and about web development specifically that I didn’t actually know, and doing the internship I was able to learn these things without having to take a class.”

“One of my favorite things about working for Hymnary is that I meet people all over the place who use Hymnary,” said Harold, “I recently went on a mission trip to Japan and the missionary who was hosting us there uses Hymnary.”

He added, “It’s fun to be working on something that people are actually using, that’s actually helping people worship.”

A more in-depth look at Hymnary.org’s tenth anniversary and the organization can be found at https://hymnary.org/node/38828.