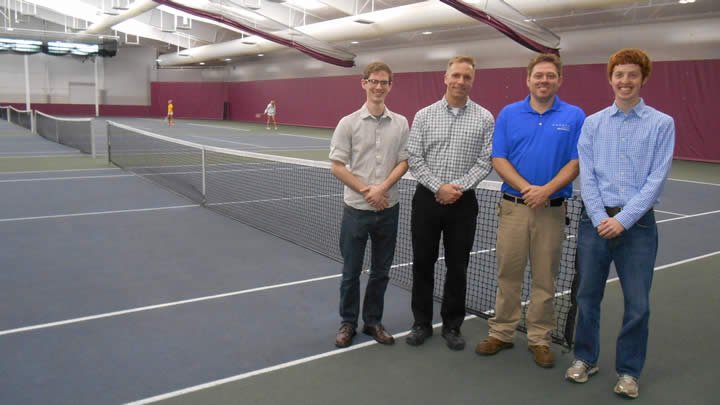 Expected savings of $20,000 to $25,000 a year ultimately made the decision to install 142 energy efficient LED lights in the Huizenga Tennis and Track Center an easy one. The cost of $154,000 (minus a $46,000 rebate from Consumers Energy) will be recouped in a matter of years and given back to the Calvin Energy Recovery Fund (CERF).

“They’re LEDs instead of the haloids, so they are super efficient at generating light,” said Matthew Heun, professor of mechanical engineering at Calvin College and supervisor for CERF. “Midwest Energy Group designed it to give us enough light over the tennis courts to meet the regulations for the NCAA tennis matches.”

The idea for CERF arose in 2007 when Heun asked his students what it would take to make Calvin College carbon neutral. The students discovered the importance of energy efficiency in making the campus carbon neutral. As a result, CERF began in 2010 as a Green Revolving Fund, which means that donor contributions go toward funding an energy efficiency project, and the energy savings that result from the project are re-invested back into CERF to help fund other projects. CERF is overseen by the Environmental Stewardship Committee, a group of faculty, staff, and students that has to approve all CERF projects.

“This is a project I started on my junior year,” said CERF student intern Lucas Timmer. “What I did [last year] was figure out how often the lights were on. We have something called a light logger that we attached to four lights in the Tennis and Track Center just to figure out how often the lights were on and off…From that point on, I did some cost analysis to see whether it’s feasible, looked up different LED fixtures that we think would work, looked up different contractors, I created the request for proposal, I had to look up NCAA lighting regulations.”

Along with the new lighting project, Timmer also worked on a CERF project to install 140 low-flow showerheads in the dormitory suites on campus. The energy savings garnered from that project amount to $4,000-5,000 per year, which is a quick payback for CERF.

Both Timmer and Heun noted several advantages that come with the new lights, besides the energy savings. The light from LED fixtures looks like more natural lighting, resembling daylight, whereas the old metal haloids produce more synthetic-looking light. In addition, the new LED lights will offset maintenance and labor costs, since they are projected to last for at least a decade, as opposed to the old lights, which are supposed to be replaced every three to four years.

Part of the impetus for the project arose from the recognition that the Huizenga Tennis and Track Center is a hotspot on campus.

“That building, from October to April, is probably our most utilized activity space on campus from six in the morning until 11 at night,” said James Timmer, Calvin’s director of men’s athletics, “which means the lights are on a ton…One of the ways that we knew we could be more efficient was in the cost that it is to light that.”

But the move to efficiency and energy savings did not diminish the quality of the lighting, Timmer said.

“With that cost savings, what’s really cool is that we don’t lose performance ability,” he said. “It’s actually lit better; it meets NCAA requirements for indoor tennis matches, it provides a better feel for our athletes for practice, and for classes … . These lights allow us to continue the usage pattern with a better performance in the lighting, and yet [lower] the cost. So for athletics and kinesiology, it’s a win-win.”

Heun thinks that the recent lighting initiative is indicative of CERF’s overall goals and aspirations to responsibly steward resources from a Christian worldview.

“I think this is one of the premiere examples of a way to be good stewards of the earth,” Heun said. “The fundamental reason for CERF is to be exactly that. How can we be faithful stewards of God’s creation? CERF is a great way to find the places where we can be both stewardly with natural resources and with our financial resources. And to me it’s just a wonderful way to be an environmentally minded, technical person, to sit at the intersection of those good things.”

CERF is considering the Hoogenboom Health and Recreation Center and Venema Aquatic Center as potential venues to install the energy-efficient LED lights in the future.