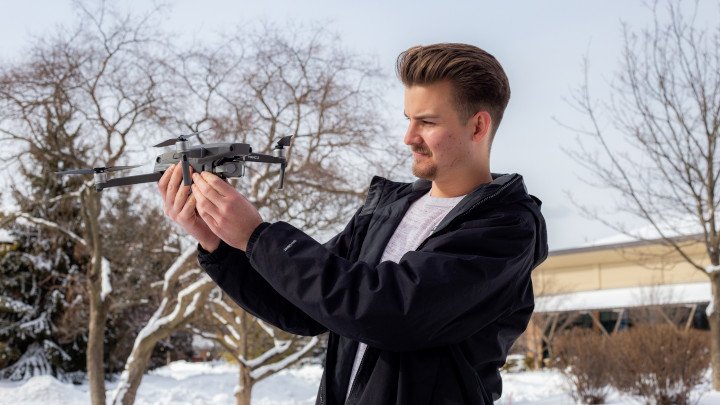 Adam Tjoelker can’t remember a time when he wasn’t fascinated by maps.

“My mom said that when I was in preschool, I drew a map from my bed to my preschool,” he said. “I remember being on road trips as a kid looking at the huge fold-out map.”

Despite his geographic leanings, Tjoelker prioritized practicality as a college freshman and majored in mechanical engineering. However, he eventually realized that he was different than many of the other engineers, and science was actually a better fit for him.

“Engineering is where you make stuff and then science is where you ask questions,” he said. “I was more inclined towards the research, the theoretical aspect. That's what interests me.”

Tjoelker eventually revisited his old interest in mapping by adding a minor in geography as well as a certificate in Geographic Information Systems. Despite his pivot from engineering to science, Tjoelker doesn’t regret his “rigorous” engineering background. He’s found that he can apply the math and analytical skills he learned as an engineer to his new field of interest.

“It's too late for me to change majors—not that I would do that. I'm not sure what I would do differently, if I could go back in time. Engineering was how I started out, and definitely now I found that my passion is in geospatial sciences,” Tjoelker said. “And so I was really excited that Calvin had courses that are in that field.”

Although Tjoelker chose to pursue additional geography and mapping coursework on his own, one of his professors, Jason VanHorn, helped keep him truly engaged in his new area of study.

“He's exceptional,” Tjoelker said about VanHorn. “He's very passionate about teaching. He loves engaging with students and supporting students in choosing their own mapping project relevant to what they want to do. And he is up to date on the software. He’s very invested in making sure that the GIS education at Calvin continues to be relevant.”

Tjoelker particularly enjoyed his remote sensing drone class, and he thinks more Calvin students should consider taking it. He learned how to make orthomosaics (a detailed, accurate aerial photo of a certain area), 3D models of buildings, and a digital terrain model (a topographic model of the bare Earth that can be manipulated by computer programs). The more Tjoelker learns about mapping, the more fascinated he is by the wide range of information it can provide and the many questions it can answer.

“There's so much potential,” he said. “If you have a terrain map of Kent County, there's a lot you can do with that. You can start to survey areas, calculate average elevations, run a watershed analysis, and figure out where the water is going to flow and where the largest drainage areas are. With computing power increasing over the last few decades, the capacity for conducting analyses such as these has grown exponentially.”

He’s also excited by the many different contexts in which this skill-set can be applied, in business, academia, and even his personal life. He could leverage his engineering background to get into drone and satellite technology design development, start his own drone photography business, or pursue a PhD and continue doing research in GIS. As an international traveler who was born in Minnesota and grew up in Texas and Australia, he’s already used his drone skills to capture memories of the places he’s been, such as Germany, Switzerland, and the Netherlands. But his appetite for new places still hasn’t been satiated.

“There's not really a place I don't want to go,” he said. “I'd love to go to the Arctic. There’s a lot of research going on in the Arctic.”

Now an incoming senior, Tjoelker is currently leaning towards applying to graduate school in geospatial science. Since the three classes in the Geographic Information Systems certificate count toward Calvin’s new master’s degree in GIS, he’s considering doing that.

“There's no other Christian schools in the nation now that have this master's program; we'll be the only one,” he said. “Calvin’s GIS program is one of the strongest if you're looking for a Christian liberal arts education; there really aren't any other schools that have anything similar.”

Tjoelker believes that Calvin’s smaller, more personal learning environment gave him unique experiences, opportunities, and connections. For instance, he was able to get his current plate tectonic summer research position with geology professor Renee Sparks through his roommate, Simon Detmer. Tjoelker, Detmer, and fellow student researcher Neil Van Kanegan are planning to present the results of their research at a national convention this coming December.

“If you're coming to Calvin, you'll get the experience where professors are interested in what you want to learn about. And if you show interest in class, professors will be more than happy to engage with you. I don't think I would be able to have the same experience at a larger school; it’d be much more difficult to get research opportunities,” he said. “Calvin's a great community to be in and you can get a lot of opportunities just by asking.”