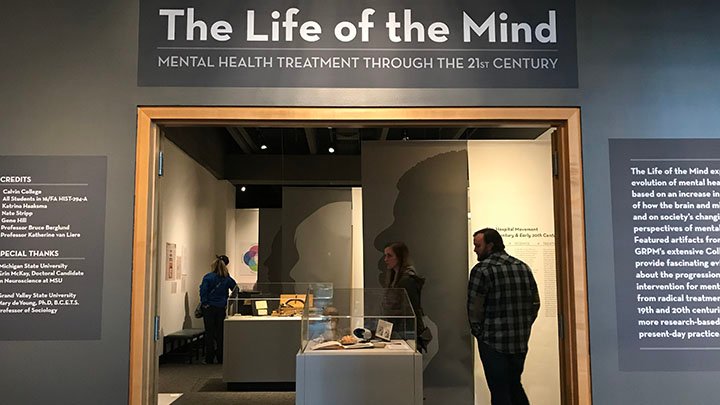 What was once a project proposal from three Calvin students is now a museum exhibit at the Grand Rapids Public Museum (GRPM).

Junior Katrina Haaksma and seniors Gene Hill and Nate Stripp created Life of the Mind, an exhibit proposal they presented to the GRPM that originated in their fall 2016 history class, “Research Methods in History.” The proposal was officially accepted in spring 2017 and is on display in the GRPM from October 21 through January 7, 2018.

Life of the Mind primarily features materials donated to the GRPM archives from Pine Rest, focusing on mental health treatments from the early 1900s to the present.

In creating the exhibit, Haaksma, Hill and Stripp wanted to display mental health matters in a destigmatizing manner—portraying past and present treatments of mental health in an informational way. Thus, Stripp designed the layout of the exhibit accordingly.

“My goal was to try to make visitors feel as though they are patients within a mental institution in the different time periods displayed,” Stripp said. “We very much wanted to stray from the ‘ghost story’ experience and push toward portraying a much more human, accessible and moving experience, while still acknowledging the grotesque things that were done.”

Approximately one in five teenagers age 13 to 18 experience a severe mental disorder at some point, and one in five adults in the United States experience mental illness in a given year. As the statistics prove, mental health issues are current and prevalent, so Haaksma, Hill and Stripp hope to make the narratives of mental health less taboo.

Calvin’s history department has held a relationship with the GRPM for several decades, but this particular project began with professor Katherine van Liere’s initiative in 2015.

“I wanted to make the students’ involvement with the [GRPM] collection more active than simply viewing and taking notes; so when I taught history 294 in interim 2015, I required them to propose exhibit concepts based on items in the museum collection that were not currently being displayed,” van Liere said. “They came up with some fantastic ideas, which they presented formally to the museum staff, who were extremely impressed. Professor Berglund taught the same course in 2016 and 2017, using a similar assignment. It’s exciting to learn that the museum decided to adopt one of the students’ proposals.”

History professor Bruce Berglund taught Haaksma, Hill and Stripp in fall 2016 and has found this course project to be very valuable for students. “They get practical tools to be a history student and history major—they learn how to find source materials and evaluate them; how to differentiate fake information from reliable information; and how to form arguments and support those arguments with evidence.”

“Most history majors are also majoring in one or two other programs, so I hear regularly how useful it is for them to understand how they can go about learning and gaining knowledge and expressing themselves as a history major, and how it compliments their studies in other disciplines,” Berglund said.

Haaksma, Hill, Stripp and Berglund have high hopes for the influence of this exhibit. “I hope that the exhibit gives people a vivid glimpse into the early history of Pine Rest and provokes conversation about mental health,” Hill said. “I hope the exhibit will present mental health issues in a humanizing, destigmatizing way, providing an informational experience for visitors,” Haaksma added.

Regarding the history of mental health treatment, Berglund hopes that visitors to the exhibit are able to see how medical science has evolved, and how that is affected by culture. “In looking at medical history and the history of health treatment, it really helps us to understand how medical science has evolved, and the mistaken directions it has gone into,” Berglund said. “Our understanding of mental and physical health is shaped by cultural contexts. It is important for people to see that medical science is subject to historical change in the same way that politics, art and technology are.”

In addition, Stripp hopes the visitor’s experience at the exhibit will leave them with hope for the future of mental health treatment. “There have been times in our history, as well as the present, where we have treated those with mental illnesses in ways that are sub-human,” Stripp said, “But we can still improve on these things; it’s an area in which we can and are getting better.”

Life of the Mind accompanies the touring Brain: The World Inside Your Head exhibit at the GRPM this fall.