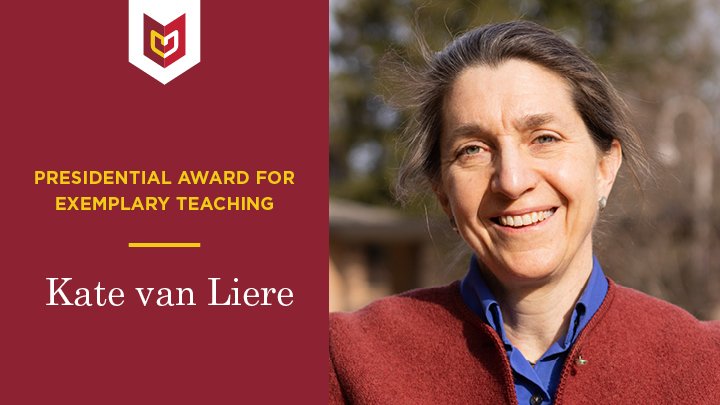 As a high school student growing up on the east coast in a Philadelphia suburb, Kate van Liere really wanted to be a good lacrosse player.

“If I'd had any natural talent, I would have been (good) because I spent many hours practicing,” she said. “I put in all this extra time. I practiced and I practiced.”

From the field to the classroom

Four decades later, van Liere, a professor of history, takes a similar approach to her teaching craft when it comes to practice and preparation.

“I work hard at teaching,” she said. “I put in a lot of extra time. I expect my students to work hard, but for me to expect that from them, I need to model it myself.”

Her hard work paid off when she was named the 2022 winner of Calvin’s Presidential Award for Exemplary Teaching, the highest honor the university awards for teaching. The award includes a special medallion designed by Carl Huisman, a Calvin professor of art emeritus, and a cash award funded from an endowment established in memory of George B. and Margaret K. Tinholt.

Van Liere is the 30th winner in the history of the award and the third history professor to be so honored, following Bert de Vries in 1998 and Jim Bratt in 2013.

She smiles and nods her head when asked if the award is satisfying.

“I’m not as gifted as some of my colleagues are as a scholar,” she said. “I realized years ago that my time was better spent trying to be a good teacher. And this (history) department has long valued good teaching. So, yes, this award is a wonderful validation.”

The award criteria notes that “award recipients not only have exceptional teaching skills, they also consistently influence the lives and careers of Calvin University students in lifelong Christian ways.”

History department colleagues such as Will Katerberg say van Liere checks all the boxes. The two have worked together since Katerberg joined the Calvin faculty in 1999, one year after van Liere had arrived with her husband Frans for a shared position in the history department (an innovative arrangement that continues to this day).

Said Katerberg: “In my observations as a colleague and as a former history department chair, I can say that the breadth, variety, creativity and determination of Kate’s teaching are inspiring and astonishing. And she does this all in a humble, unassuming way.”

Katerberg has been especially impressed by van Liere’s willingness to adopt new ways to teach old subjects, including something called Reacting to the Past games.

This pedagogical approach sees students assigned to play characters associated with historical events such as the trial of Galileo or the French Revolution. They then research those characters, write speeches and act out historical scenarios in class as their characters.

For van Liere, the games are valuable for many reasons, one being that they give students a deeper understanding of history and why it’s important.

“It's a great way of getting students to immerse themselves in the past and to appreciate history as a story of contingency,” she said. “It helps them to understand that things didn't have to come out the way they came out. They came out that way because of decisions that were made, arguments that were won or lost, even random events that happened.”

Another benefit is that Reacting to the Past games help her students become better writers.

“When you're giving a three- or four-minute speech, you can't waste words, you have to get to the point early,” she said. “You have to speak in sentences that are short enough that people don't get lost. Your sentences have to have subjects and verbs that are concrete and images that people can understand.”

Those skills, she tells her students, are valuable not just for historians but across a variety of careers, and she encourages them to not stop writing that way when her class is finished.

“All these lessons that they learn in writing a good speech are still lessons they should apply when writing their next academic paper,” she said. “Because believe it or not, people don't really want long-winded, passive-voice sentences with all kinds of subordinate clauses even in in an academic paper.’”

Van Liere’s mother Thorne Tjader Elliot was a special education elementary school teacher, inspiring her daughter’s own journey into teaching. She also showed by example what it meant to work hard as a teacher.

But it was her father, John Elliot, a lifelong salesman, who sparked her dreams of becoming a historian.

“Because of my mother, I always saw teaching as a worthwhile calling,” she said. “She was good at it, and she loved it. My father never found his true vocation. But he was an avid reader and a history buff. When I decided I wanted to become a teacher and study something at the Ph.D. level, he was one of the reasons that I chose history because our house was full of books, mostly history books.”

Van Liere did her undergraduate degree at Williams College, graduating with a bachelor’s degree with highest honors in the “History of Ideas.” She went on to earn a master's degree in history at Cambridge and a master’s and Ph.D. at Princeton, both also in history.

Along the way she also became fluent in Spanish and Dutch (her husband Frans was born and raised in the Netherlands), and she has what she calls reading knowledge in Latin, French, German, and Italian.

And thanks to her parents’ dual influences, van Liere said that today she is exactly where she wants to be as a teacher of history.

Leaning back in her chair in her office at Calvin, she paused for a moment recently when asked about her career as she nears the quarter-century mark at the university.

And then, with a small smile on her face, hands laced behind her head, she said simply: “Studying history, being a historian, has been what I hoped. And I do still love teaching. Very much.”

The following awards were given by the provost's office for the 2021-2022 academic year.

FEN Award for Excellence in Teaching