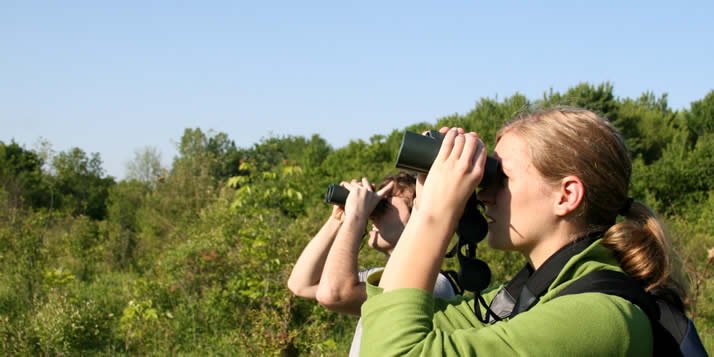 Calvin students Jodi Unema and Josh Garone work as summer preserve stewards in Calvin's 90-acre Ecosystem Preserve and dive into some bird-monitoring right after the 08-09 school year was done.

“The yellow warbler says, ‘sweet sweet sweet, I’m so sweet,’” explains senior Jodi Unema as she heads deeper into a field near the back of Calvin’s 90-acre Ecosystem Preserve on an early June morning.

The elementary education and integrated science major from Hudsonville, Mich., who is working as a summer preserve steward, is listening and watching for birds that have nested this year in the preserve. Once birds are spotted and identified, she writes them on a list that will become a part of the Ecosystem Preserve’s permanent record.

What the birding Unema, and her fellow steward, Josh Garone, a junior environmental science major from Andover, Mass., are doing in June is part of a breeding bird survey that has been conducted on an annual basis for nearly two decades. This year, the stewards will also identify and measure the trees of the central five acres of the preserve woodlot as part of a survey that has been conducted every five years dating back to 1974.

In recent years preserve stewards have seen such rare birds as the scarlet tanager and the indigo bunting. This summer Unema and Garone have already seen the scarlet tanager. Now they’re on the lookout for the bunting and any other birds not yet recorded.

Unema and Garone began their work as summer preserve stewards soon after the 2008-09 school year ended, diving into bird-monitoring right away.

Armed with Sibley’s Guide to Birds, binoculars and an iPod, the stewards venture daily into the preserve to look for birds. On that June day, they spot a yellow warbler, a song sparrow, a field sparrow and a grey male catbird, whose call at times sounds like a cat’s “meow.” Identifying each bird is a back-and-forth process between the students, with Garone naming characteristics of a bird he sees through his binoculars, while Unema pages through Sibley’s to find a match.

“This is really a learning process—in a few weeks we’ll know them pretty well,” said Unema.

To get a closer look at some of the birds, the stewards up their game. They use their iPod and speakers to attract birds looking for mates, such a field sparrow that perches on a nearby tree and gives a concert when he hears the recorded bird calls. This method also works to spot a red-eyed vireo, a hairy woodpecker and a red-bellied woodpecker.

All in a day’s work

The preserve stewards spend each day doing everything from bird identification to trail management and invasive species removal. Ecosystem Preserve program manager Jeanette Henderson said the variety helps the students to get plenty of experience.

As an elementary education major, Unema sees her work in the preserve as a way to build a knowledge base she’ll later draw from when she’s in front of a class.

Randy Van Dragt, a biology professor who supervises the preserve stewards, says the summer program prepares students to do well in graduate school, and in environmentally-related careers. He sees it going beyond just career preparation, too:

“I hope the experience also helps students acquire an identification with a particular place so that they can learn it deeply.”

Back to the field

“What’s that bird at the top of the tree there?” asks Garone, pointing to a tall, dead tree at the eastern edge of the preserve woodlot.

The binoculars go up and a preliminary identification is made: it may, in fact, be an indigo bunting living in the preserve. Garone pulls out the iPod to find the indigo bunting call and presses play.

Within seconds, the bird swoops down from the tree and into the field near the students. The small songbird with shimmering, royal blue feathers flies from tree to tree, circling the students, trying to find a mate. Meanwhile, Unema and Garone can’t keep their eyes off the magnificent bird, who perches close enough to be seen without binoculars.

“This is when I love this job!” says Unema. 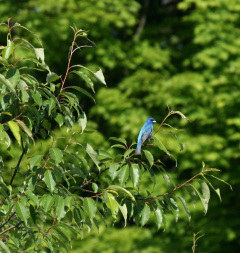