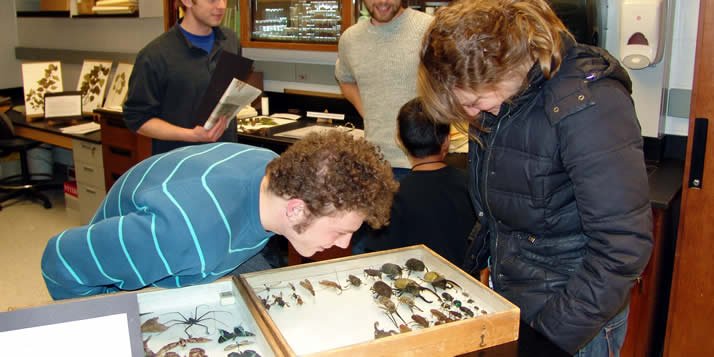 Tucked into a corner of DeVries Hall on Calvin's campus is an oddly shaped room containing a trove of biological treasures.

Tucked into a corner of DeVries Hall on Calvin's campus is an oddly shaped room containing a trove of biological treasures.

Called simply the Herbarium, the windowless space, whose roots go back to the 1950s and Calvin's Franklin Street campus, is full of cabinets and curios displaying plants and birds and insects. Many are from Michigan, but a few hail from further flung locales, including a pressed plant from England that once belonged to Charles Darwin's professor.

Although Calvin's Herbarium has been around for decades, this spring it became a little more visible. After recent graduates Peter Hiskes and Dave Spalink, along with biology professor Dave Warners, worked to catalog the collection, they held a March open house. Faculty and staff, and sometimes their children, plus area students, came to DeVries Hall to sip punch and marvel at the variety of God's creation on display.

Hiskes spent some seven weeks prepping the Herbarium for the open house and said that the well-kept secret represents an important Calvin contribution to west Michigan.

“It (the Herbarium) is a perfect place to document and preserve the flora of Kent County,” he said. “It preserves an important piece of local knowledge which helps us learn how to better live in this place. ‘Knowing your place’ is a concept that we have talked about a lot at Calvin in the past few years especially, and I think the Herbarium represents one way of doing that.”

Warners said that the Herbarium contains approximately 8,000 pressed vascular plant specimens from around the world, including a sedge collected by Darwin's professor in 1836. Many of the specimens represent the native flora of Michigan. In fact Calvin's Herbarium, said Warners, has the most extensive collection of Kent County flora of any college or university in the state.

“It offers a permanent record of elements of the creation as they existed at certain times in the past,” said Warners. “These can provide reference material for comparative studies and also a reminder of the species that previously lived in locations that are no longer able to support them. This knowledge can inform plans for restoration, and they are also tangible reminders of some of the costs of human disregard.”

And while the open house, which attracted some 200 visitors, was intended to introduce the Herbarium more broadly to the Calvin community, it already is well-used, Warners said, by the college's science division. In plant taxonomy classes, students collect and add specimens to the Herbarium. It is also used extensively in taxonomy classes to learn the characteristics of plant taxons at the family, genus and species level.

Technically, said Warners, the collection is more than an herbarium because it houses not only plants, but also animals and even shells and some algae, (which technically are not plants).

“It's really an herbarium and a museum,” he said. “We also keep a large number of reference books in that room—field guides and floras and such, together with some microscopes to help in identification, a large plant drier and supplies.”

Calvin biology professor Randy Van Dragt has built the zoological collection for teaching purposes over the years, intentionally keeping the specimens to a manageable size.

“Compared to plant and insect specimens, which can be preserved by drying,” he said, “most vertebrate specimens require storage in preservative which means they take up a lot more room. This is one reason that we keep the vertebrate collection small.”

“The animal collections are essential to certain courses such as entomology and the vertebrate biology course that I teach,” he said. “In addition, the entomology collection has been consulted occasionally in the past by individuals working on state-wide distributions of particular insect groups. So our collection is small, but robust. And valuable.”

The entire Herbarium collection is digitized and can be accessed on the computer in the Herbarium. 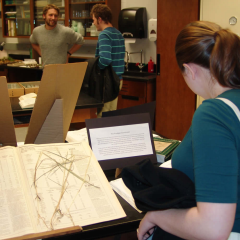 Students and faculty gather to view the collection 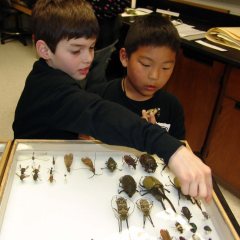 The Herbarium houses more than plants