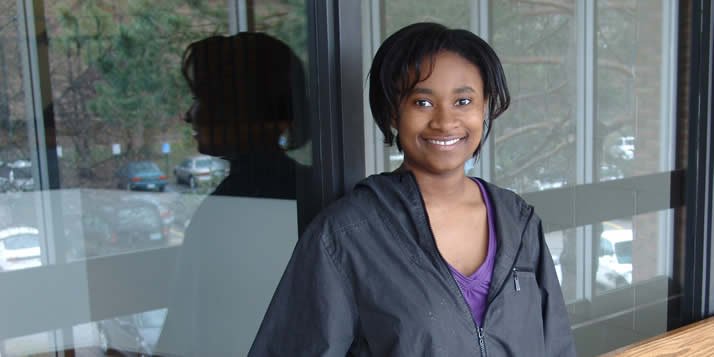 Calvin senior Jennifer Jones won the Opera Grand Rapids competition, singing “Song to the Moon” from Dvorak’s Rusalka and the "Dove sono” from Mozart’s The Marriage of Figaro.

After competing in the Opera Grand Rapids Collegiate Vocal Competition on March 29, however, Jones is now something else: a first-place singer.

Jones won the Opera Grand Rapids competition, singing “Song to the Moon” from Dvorak’s Rusalka and the “Dove sono” from Mozart’s The Marriage of Figaro.

“‘Dove sono’ I had been working on since last summer. Vocally it is a difficult piece for a soprano, but it shows my strengths,” Jones said. She explained that the “Dove sono” does not consist of “fast, high notes,” but rather requires the singer to hold steady notes for long periods of time, which is something Jones does rather well.

“You have to have a lot of vocal control and acting ability to keep people interested,” said Jones.

“‘Song to the Moon” is a “really romantic piece from Dvorak,” said Jones, (who profited $250 from her first place finish). “It is the story of the The Little Mermaid basically, except it doesn’t have a happy ending. And it is in Czech, and that is an interesting twist because nobody else did Czech. Czech is not a usual singing language.”

Jones said that the judges were impressed by the degree of difficulty in “Dove sono” and with how well “Song to the Moon” fit her voice.

She credits music professor Keith Brautigam with gaining her entry into this competition, which is for college-aged vocalists. Jones explained that he invites his top two performers every year to compete. She has been working directly with Brautigam since her sophomore year at Calvin, and he has helped her take her performance to the next level: “One really important thing was learning to put acting and singing together for classical music. I remember one time we were having a lesson, and he just said something, and the light came on! And ever since then I have had a certain amount of success with the things that I have tried out for,” said Jones. “He is really good about making things clear for students about how the voice works.”

“From her very first lessons, it was very evident that this is an extremely talented young lady who possesses a truly beautiful voice,” said Brautigam, “as well as the desire, ability and musicianship to have an excellent career as a professional singer and/or a musician-teacher in the field. Jennifer continually exceeds my expectations.”

Growing up in Detroit, Mich., Jones did not think of vocal performance as a career. She participated in ensembles and musicals, but thought of her talent as a gift and nothing more.

In fact, as a freshman at Calvin, she was a chemical engineering major: “I was wondering what I should study at college while I was in my room, and there was an encyclopedia. So, I opened it, and there was ‘chemical engineering.’ I thought that was the answer,” said Jones. “Second semester of my freshman year, I was in A Funny Thing Happened on the Way to the Forum. And I realized that I really liked what it was that I was doing, and that I hated engineering, and my grades were bad. So I switched.”

Upon making the switch, Jones realized that there were still some obstacles to overcome.

Jones, on the other hand, has found great success in women’s chorale: “I have learned that music is music, and it should not be categorized,” she said, who explained that she chose women’s chorale because she had the voice for it. “My voice isn’t poppy. It is a little bit stronger than that, and it is higher. Classical music was a better fit for my voice,” she said.

Looking to the future, Jones has been accepted into Indiana University School of Music. Brautigam fully expects Jones to succeed and predicts that she is now embarking on what will be a “highly-successful full-time performance career.” Jones is excited to attain more opera experience and continue taking voice lessons and vocal pedagogy classes.

“That is what it is all about,” she said.