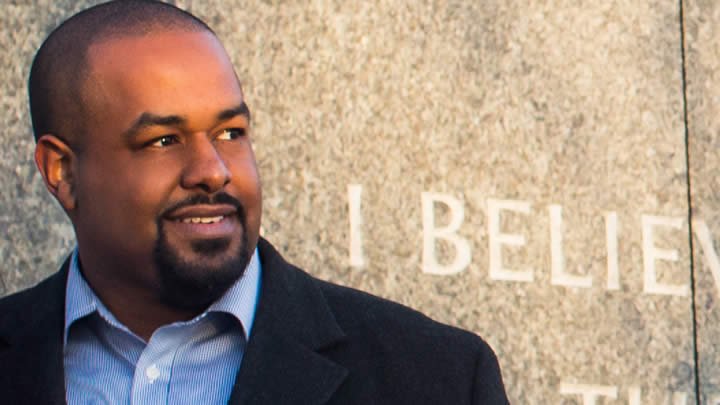 He’s a spiritual advisor to President Obama, a former head of the White House Office of Faith-based and Neighborhood Partnerships, and has been referred to as the “Pastor-in-Chief” by TIME Magazine. And he’s speaking at 7:30 p.m. on Monday, April 28, 2014, at the 18th annual Paul B. Henry Lecture held at Calvin College’s Covenant Fine Arts Center Recital Hall.

His name is Joshua DuBois, a Pentecostal pastor from Tennessee who joined the Obama campaign after watching a speech from then-State Senator Barack Obama in the summer of 2004. In 2001, President Bush initiated the White House Office of Faith-Based and Community Initiatives. After President Obama won the election in 2008, he renamed it the Office of Faith-Based and Neighborhood Partnerships (OFBNP) and selected DuBois as its head, making him the youngest-ever head of a White House department.

As Obama’s spiritual advisor, DuBois sent devotionals to the president every morning. In February 2013, DuBois resigned from his position at the White House and wrote a book, The President’s Devotional: The Daily Readings that Inspired President Obama and Stories of Faith in the White House. He also writes for Newsweek and The Daily Beast as a religion columnist.

“Christ and Culture in the White House and the Wider World.” That’s the title of the lecture that DuBois will give on April 28 at Calvin, which will explore the connection between religion, politics, and society.

“He’s going to be talking about the intersection of Christian faith and politics,” said Kevin den Dulk, political science professor at Calvin College and executive director of the Henry Institute, “and even some broader questions than just politics. How do Christians engage in culture?”

The audience can expect stories about DuBois’s time in the White House and lessons that he learned as the spiritual mentor to the leader of the free world.

“He’s going to bring in anecdotes from his time in the White House,” said den Dulk. “What did it mean to be a faithful Christian advising the president on a whole range of matters? What lessons does he bring from that experience into the wider world?”

After the 2008 presidential election, den Dulk and other colleagues from Calvin’s political science department wrote a book titled The Disappearing God Gap?: Religion in the 2008 Presidential Election. DuBois was interviewed by high profile national media for the presidential devotions book that was released last fall, and den Dulk recalled DuBois’s name from The Disappearing God Gap? research leading him to conclude that DuBois would be a great candidate for the annual Henry Lecture, which has featured a number of high profile senators, members of congress, and other elected officials over the past 18 years.

Stephen Monsma, a research fellow at the Henry Institute, is an acquaintance of DuBois and has talked with him on different occasions. Monsma met DuBois at a conference hosted by the Brookings Institution in Washington, D.C. regarding faith-based organizations and their relationship to government. Monsma has also stopped by DuBois’s White House office in the past to talk about various issues and concerns.

“He [DuBois] is a thoughtful guy who, from his position in Washington, has been able to see the whole interaction between government and faith-based organizations and churches,” Monsma said. “I’m eager to hear all he’ll have to say.”

After the lecture, there will be an audience Q&A time. Den Dulk will conduct a videotaped interview with DuBois prior to the lecture. In the interview, den Dulk hopes to talk with DuBois about his beginnings with politics and religion. Considering that he started his political-religious career at a relatively young age, den Dulk thinks that DuBois’s vocational history will be of particular interest to college students.

“I want our students to have a little bit of insight into how he saw an opportunity to serve through politics,” den Dulk said. “He [DuBois] is still quite young, but certainly when he started he was very young…he was a Pentecostal pastor, just starting out in his early twenties, but he met this Barack Obama person, who himself was just starting out in legislative politics.”