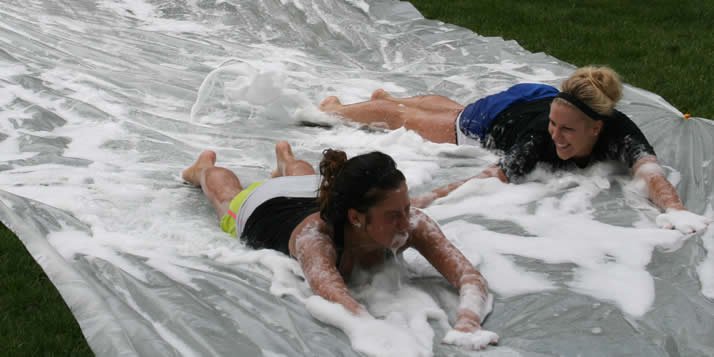 The American Declaration of Independence enshrines three basic rights: Life, liberty and the pursuit of happiness.  It’s noteworthy that our founding fathers put happiness right up there with life and liberty, according to Andrew Bailey, Calvin recreation science professor.

“Some people think happiness is a frivolous topic; it’s not just about rainbows and lollipops,” said Bailey, who has been studying the subject since his work as an undergraduate. “This field of research has some very practical aspects, especially when you are thinking about finding meaning in life; where do you find meaning in life on a daily basis?”

That is a question more people have become interested in, especially in the last century, he said. “This area of thought emerged as a response to progress,” said Bailey. “People started to think about quality of life around the time of the Industrial Revolution. They started to ask the question, ‘Is this worth pursuing, or is this something I have to do for the sake of progress?’”

Bailey’s research became a central focus for his “Management of Leisure Services” class, which was charged with planning an event on the campus.

“A lot of our field (recreation) is about making people happy,” said Symone Cliffman, a first-year student in the class, “so it made sense to do something like this.”

Cliffman was referring to Calvin College Happiness Day, which was celebrated on May 4, with various events planned for students, faculty and staff all over the campus.  “We thought of things that made us happy, and bubbles came up right away,” said junior classmate Bea Williamson.

Williamson, Cliffman and junior Nicole Zook, clad in yellow smiley-face t-shirts,  were manning the “bubble pool” on the Commons Lawn, encouraging students to take a break from studying and just have fun.

“We get bashed for not having a hard science background,” said recreation major John Schuitema. “But there’s a lot of value in being able to get away from the rest of the world and participate in other activities.”

In fact, participation in activity is key to finding happiness in life, according to Bailey. “Free play like bubble blowing helps people de-stress and leads to better overall life satisfaction,” he said. Physical health is another significant happiness indicator, which led to the team sponsoring a dance session, yoga session and adventure race.

The adventure race featured nine teams of three students racing around campus in an effort to complete eight challenges—water balloon launching, dive rings searching, body art painting, and slip-n-sliding to name a few— in the least amount of time.

Senior Levi Bouwkamp agreed to take part in the race because “anything out of the ordinary usually ends up being fun,” he said. “It reminded me of something I would do in the summer as a kid: it was like a big play day.”

First-year students Maria Krieger, Joey Hulst and Jess Trojanowski signed up for the competition as soon as they heard about it. “It was so fun,” said Hulst. “I really liked the slip ‘n slide; we did that first so that was probably not the smartest thing,” she said, referring to her dripping-wet, mud-coated shirt.

Other events on the day included free burritos from Chipotle (“Who isn’t happy about free food?” asked Bailey.), lawn games and a gratitude station, where participants were encouraged to reflect on their blessings and write a postcard to someone to whom they were grateful.

Gratefulness is another strong indicator of happiness, Bailey explained. “If you take the time to count your blessings, it can lead to a great amount of life satisfaction,” he said.

Whether or not students participated in the events—though many did—the day was as much about awareness as anything else.  “We wanted to tell people that you can find happiness by doing certain things,” said Bailey, “and our goal was to help them find their thing. Sitting around thinking about whether you’re happy or sad is not going to do it.”

Schuitema said that he had learned a lot from the day: “Even people who weren’t participating were asking what we were doing and why we were doing it,” he said. “I’ve found that there’s a lot I’ve done in recreation that’s really affected how I do life; I’ve learned not to take it so seriously.” 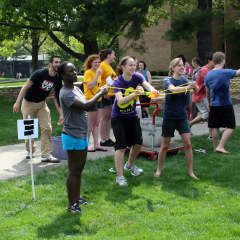 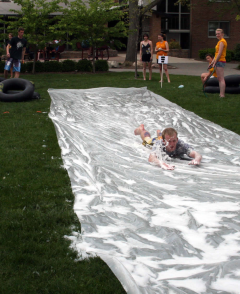 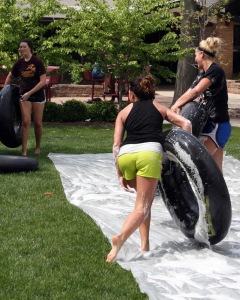 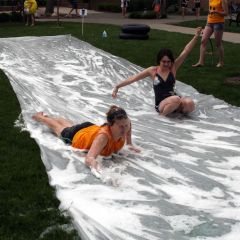 Watch one team complete all of the  happiness tasks.