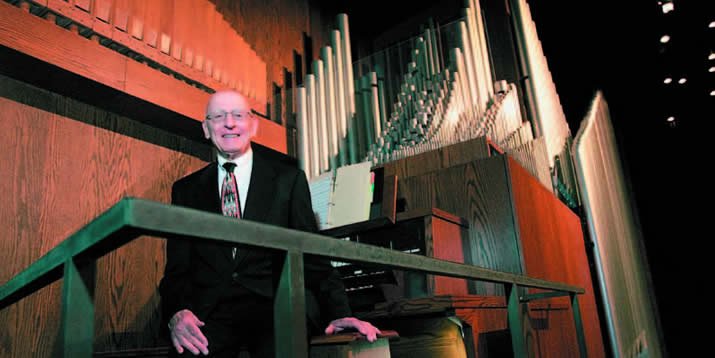 Hamersma pictured beside the Fine Arts Center organ in 2006, when he delivered a January Series lecture on organ music.

While organ music may carry a bit of a reputation as being dull or dirge-like, John Hamersma has set out to prove that it doesn’t have to be that way. In fact his new CD Color and Contrast goes to great lengths to dispel that myth.

From the title to the brightly colored, contemporary cover to the music selection, the CD provides evidence to the contrary. “Many of the selections are strongly rhythmic, foot-tapping,” said Hamersma.

Hamersma ’50 spent 50 years as part of Calvin’s music faculty, also serving as the college organist. Since his retirement in 2004, he has continued as organist and choirmaster at Grace Episcopal Church in East Grand Rapids.

Listen to the introduction from track #4 “Now Thank We All Our God," recorded by John Hamersma on the organ at Grace Episcopal Church.

“It was after my retirement that I was inspired to attempt this project,” said Hamersma, 79, of his first recording. “Since I now have time to practice regularly, I play better.”

He was encouraged by members of his congregation—who helped finance the project—and others, including his wife, June, and Jake Bosmeijer, chief engineer for Calvin’s communication arts and sciences department, to record this collection of favorite selections from the last 50 years, particularly after serving as the organist for former President Gerald R. Ford’s funeral in 2006.

“That funeral kind of put me on the map,” said Hamersma; “I’m not sure which one, but it put me there.”

Three of the selections on the recording, “Jesu, Joy of Man’s Desiring,” “If You But Trust in God” and “I Call to You, Lord Jesus Christ,” are favorites of Hamersma’s and were performed at President Ford’s funeral.

While many of the selections are sacred, not all are classified as such, though most still have church connections because organs are found primarily in churches, Hamersma explained.

An organ of exceptional quality

The organ at Grace Episcopal is a top quality instrument constructed by distinguished organ builder Fritz Noack in 1981. “Every single stop is very distinctive and strong,” said Hamersma. “Each has a contribution to make and together it makes a very attractive ensemble.”

Such an instrument was necessary to “allow the music to speak for itself,” Hamersma said. “I don’t try to tell people what to feel,” said Hamersma. “I’m attempting to communicate what I feel to listeners.”

The end product does exactly that, said Bosmeijer. “Because of the work of Carl Hordyk (Calvin’s technical services manager, who produced the high resolution recording), and the acoustical environment, it sounds like you are in Grace Episcopal Church,” he said. “The sound is beautiful.”

And casual listeners are definitely welcome. “You don’t have to be a musician or an organ buff,” said Hamersma. In fact, the organ—referred to as the “king of instruments” by the American Guild of Organists (AGO)—is welcoming a larger audience these days thanks to promotion by the AGO, which is celebrating the International Year of the Organ.

“It’s coincidental,” said Hamersma, of his CD’s release during this celebratory year. “But it (the celebratory year) has drawn some attention to the organ. There are organ festivals taking place across the U.S. and Europe, and the organ has become quite the thing in Japan.” 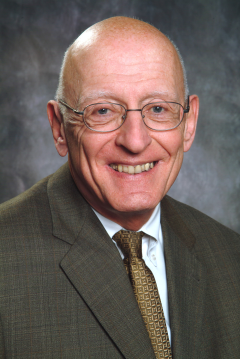