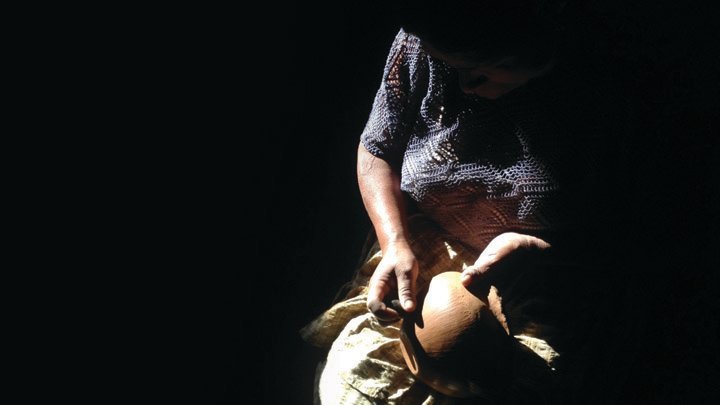 Peter (Sunshine) Cahill ’16, although born in the United States, lived most of his life in Guatemala. In the past three years, Cahill has returned to Guatemala four times with a specific purpose: to research the ceramic work of the Q’eqchi’ people in Alta Verapaz, Guatemala.

With a bachelor’s degree in art, Cahill has carried this project as an undergraduate student into his postgraduate life, most recently to the National Council on Education for the Ceramic Arts (NCECA), where he presented his research findings thus far.

This year’s NCECA conference was held March 22-25 in Portland, Oregon, with approximately 6,000 people in attendance. According to Calvin art professor Anna Greidanus, who was Cahill’s professor for four ceramics courses and two interims, NCECA is the primary national and international forum for professionals in ceramics arts. It also provides a forum for students to submit proposals for conference presentations.

“I encouraged Peter early on in his research to aim for the goal of sharing it at NCECA, recognizing that the research was worthy and well-suited for this forum,” Greidanus said, who accompanied and introduced Cahill at the conference. Greidanus was Cahill’s professor for four ceramics courses and two interims.

Cahill’s research was based on his findings during his trips to Guatemala in December 2014, January 2015, August 2015, and September to December 2016—a total of about seven months. His project was designed to progress over a number of semesters, searching for methods of dialogue expressed in clay, which seek intercultural reconciliation while exploring the concept of what it means to be indigenous.

“What I brought to NCECA was a small window into a series of conversations I engaged in with several of my neighbors: potters in Alta Verapaz, Guatemala,” Cahill said.

In Alta Verapaz, Cahill would often visit the potters at their homes, or the village school. All conversations would be in Q’eqchi’. “At first, I would ask them if I could see their work, depending on how interested they were in talking to me or hearing from me,” Cahill said. “Then, I would continue to build a relationship with them and share about myself, too. Of course, some people simply weren’t interested in talking to me, which was good too, as I wanted to make sure I wasn’t being invasive or rude.”

A majority of the artists he spoke with were women of the Q’eqchi’ ethnic group, and a few other ethnicities. To understand the Q’eqchi’ ceramic art practice, he looked for answers pertaining not only to the technical aspects, but also the motivations.

In his presentation, Cahill highlighted the careers of three women: Elvire Bol, Leonicia Yoj and Dolores Aisg, each from a different sub-region with their own set of challenges that they work to overcome through ceramic art.

“[Cahill’s presentation] was well-attended and well-received,” Greidanus said. “The NCECA Conference is one of the most respected venues in the field of ceramics for presentation and representation. Needless to say, when members of the Calvin community contribute, it benefits the reputation of Calvin College, but more importantly, our contributions become meaningful in the broader field.”

Continuing in the arts

Cahill plans to continue working on this project and remain invested in the field. “Since graduating, I've been following wherever the path goes—mostly on my own accord, but with the advice of a few friends, mentors and other wise individuals,” Cahill said. “I have been really blessed to have people from many different disciplines and places of life who keep helping and encouraging this to go on.”