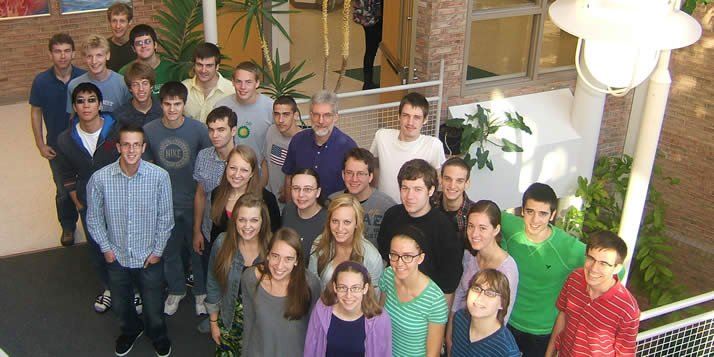 Calvin’s National Science Foundation (NSF) S-STEM grant scholarships are given to students who combine the sciences and computing in their undergraduate research. Calvin alumnus Jared Renaud was one of those students. But his off-campus research did not take place in a conventional classroom; he worked at an ancient archaeological dig site overseas in Jordan called Umm el-Jimal.

Renaud graduated from Calvin in 2010 with a degree in history and archaeology. He worked under Professor Bert de Vries at Umm el-Jimal from January 2009 until 2010 as part of a virtual reconstruction sub-group. He collaborated with fellow classmates Jacob Speelman and James Kuipers inside of an archaeological lab where they used digital photography, 3-D modeling, stereo imaging and photo-accurate model recordings to examine the dig site and preserve it digitally before the site undergoes further corrosion from weather and age.

As a result of this undergraduate work, Renaud was awarded an NSF S-STEM scholarship.

“This [the scholarship] encouraged me to further study computation and data management,” Renaud said. “During my senior year at Calvin, I took an introductory course in scientific computing and modeling, then did an independent study the following semester to develop a data organization plan for the UJ project’s archaeology lab digital archive. The work helped me realize good uses of digital technology within archaeology, and other ways I could apply myself within my desired career path.”

Renaud’s work fits with the Calvin’s science divison's push to promote the combined study of the sciences and computation.

“Science is becoming more computational all the time,” said Randall Pruim, a professor of mathematics at Calvin College who is a part of the committee that provides the S-STEM grants. “We need more people that have some training in both science and computation.”

Calvin’s science and mathematics departments are allocating two NSF grants—each of which contain over $500,000 worth of scholarships. The scholarships are awarded to students who combine science and computation in their undergraduate programs. The grant program is called Scholarships in Science, Technology, Engineering, and Mathematics (S-STEM).

The two S-STEM grants contain enough funds to run for four or five years. Calvin’s science departments designed the grants to overlap so that the new S-STEM grant will continue to fund students who were previously funded by the old S-STEM grant so that it will carry on until graduation.

Interested freshmen who apply for the grants are then interviewed about their high school experience, previous classes they have taken, and why they are interested in the sciences and computing.

Four years ago, Abigail Streelman was one of those freshmen. And she almost didn’t apply for the scholarship.

“It’s a funny story, because I realized that I had qualified for the scholarship the day before the applications were due,” Streelman said. “And I was like I’m just going to have to not do it this year, and there was some uncertainty if I wanted to continue with the computer science aspect of it, which was a big qualification. So I didn’t do it and I was really regretting it.

“And then in the summer, Professor Pruim came down to the lab I was working in and said, ‘we have an extra scholarship, [and] we know that you would be a good fit. Will you apply?’”

So Streelman applied for the S-STEM scholarship the summer after her freshman year. After she graduates this May, she plans to pursue graduate school in the sciences.

“Graduate school, or possibly I’m looking at some gap year programs abroad, studying science and doing research projects but not formal graduate work,” Streelman said. “But I’ll most likely be at some grad school.”

However, her long-term goal is to become a professor.

“I like teaching,” she said. “What’s great about being a science professor is that you don’t have to give up research in order to teach. They often do both. I think that would be the ultimate goal.”

Pruim is trying to make the case that computation and the sciences are complementary, and thus, students should be encouraged to blend the two areas of study.