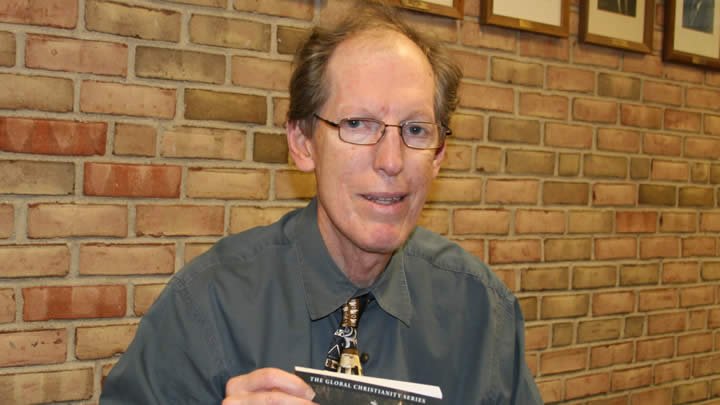 Calvin history professor emeritus Daniel Bays will be bringing some of the world’s foremost experts on American–Chinese relations to Calvin’s campus next summer for a three-week seminar on the relationship between the United States and China.

Bays received a $113,000 grant from the National Endowment for the Humanities (NEH) to fund the seminar, which aims to prepare American professors to address the American–Chinese relationship in the classroom.

Learning from the experts

“Our goal in this seminar is to expose college professors to the best information on the way academics interpret and look at the history of Chinese-American relations,” explained Bays. “The idea is to upgrade the competence of American professors, especially at smaller schools, to handle questions like, ‘why does China always throw its dissidents into jail?’ ‘Why can’t they have freedom of speech like we do?’”

The seminar will give up to 16 professors the chance to ask seasoned China experts how best to address these difficult questions. Bays, who specializes in the history of Christianity in China, will co-direct the seminar with Dong Wang.

The lineup of speakers for the conference features former ambassador Charles Freemen, who can speak to the relationship between the U.S. and China from a personal perspective. Freemen served as President Nixon’s interpreter during Nixon’s visit to China in 1972.

“Ambassador Freemen will talk about the opening of China in the 1970s after the very dramatic visit by President Nixon in early 1972. That was a huge breakthrough,” said Bays. “U.S.–China relations had been in the freezer since the early 50s, and that breakthrough made it possible to take U.S.–China relations in a much more positive direction. Since Freemen was the interpreter for President Nixon on that trip, he has some interesting experiences to share.”

A number of China scholars will be on hand as well, including University of California-San Diego sociology professor Richard Madsen, who is one of the foremost experts on Catholicism and China. Madsen will talk about the moral conflicts between the United States and China when it comes to human rights.

The attendees will also be able to use the Hekman Library’s extensive collection to conduct some research of their own on a topic related to American–Chinese relations.

Along the way, Bays plans to draw from not only political and religious history, but also cultural products from both countries to show how Chinese and Americans perceive each other.

“There are so many Chinese products, and these things all shape our foreign policy, as do portrayals of Chinese in movies and TV,” Bays said. “So this is a fun few weeks. One of the things we deal with are the ways China is depicted in American cartoons, and the way Americans are depicted in Chinese cartoons.”

Bays says that the Chinese perceptions of America reflected in politics and cartoons aren’t actually as negative as many Americans think.

“The Chinese have a pretty favorable view of America,” Bays explained. “I think many Americans would be surprised to learn that China doesn’t have an aggressive or hostile stance towards America at all.”

However, Bays added that the Chinese do sometimes feel like America is holding them back.

“Chinese people really do feel that the U.S. is trying to keep China down, excluded from the inner circle of power. The Chinese are both hopeful to be on America’s good side and suspicious that America is trying to restrict them," said Bays.

Bays hopes that this conference can help professors better explain these perceptions among Chinese people and gain a better understanding of how the Chinese view history. They, in turn, can pass this perspective on to their students:

“Things that are going on in China today have often got pretty clear historical precedence," said Bays. “The rulers of China and the people of China today are not free agents … their behavior today is still shaped by things that happened back in 1642. China’s history has had leaders of the country looking over their shoulders all the time. Americans are not that historically minded. We see today, not so much as being shaped by the past, but full of promise for the future. Just to realize that starts to give you some insights into this relationship.”