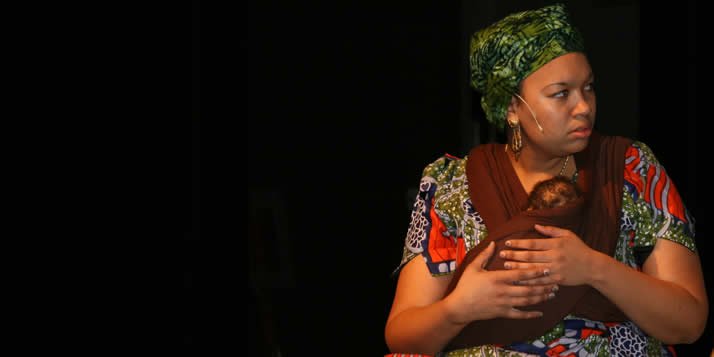 The Calvin Theatre Company tells the stories of refugees from many countries who now call Grand Rapids "home."

"In my country" is how many of the stories begin. The story of the Iraqi woman driven first to Syria and then to the U.S. by war. The story of the boy who ran from his Sudanese village to Ethiopia, fleeing a rebel army, wild animals and other terrors. The story of a woman who fled the holocaust in the Congo with a large family. “One night,” the stories continue, the soldiers come, we resisted, my father was killed, my mother was killed, my family was killed, I was threatened, I was raped, I was beaten, I knew they were coming for me, I ran away across the desert.

Grains of Hope, a new ethnographic play from the Calvin Theatre Company, contains these and many more stories of refugees—from Vietnam, Bosnia, Sudan, Somalia, Bhutan, Burma, Congo, Cuba, Iraq, Afghanistan, Sierra Leone and Sri Lanka—and those of the volunteers and service workers who helped them to resettle in Grand Rapids. The play was fashioned from more than 100 interviews conducted by Stephanie Sandberg, senior Jordan Davis and junior Kristin Kibbe with area refugees over a two-year period.

“You can’t stay on the edge of this work; you have to completely immerse yourself," Sandberg said of creating the play. It was a process that gave her an entrée into many enduring friendships.

“People are very lonely when they come here,” she said, adding that typically, refugees typically settle where they have some friends or family members. “Can you imagine being that first person who came from Bhutan?” she said.

Many refugees suffer significant emotional issues in the wake of their trauma, Sandberg said, including alcoholism, post traumatic stress disorder, mental illness and other problems. In addition to representing these struggles well, the students who play the refugees in Grains of Hope must also master the challenges of accents, dialects, movement and of acting in a different type of drama: “It’s very much written in monologues,” said Analise Glover, a sophomore majoring in strategic communications. Glover said her high school theater experience didn’t prepare her for playing the Congolese refugee Francine. “Usually, there’s one story told by a whole cast,” she said. “This is many stories told together.”

Even the setting and sound system for the play were designed to reflect the refugee experience, Sandberg said. The set-up for the play includes three screens, a slide projector, eight boxes and 11 suitcases. “The whole aesthetic is that it’s like traveling,” she said. And the play will travel. After performances at 7:30 p.m., April 11 in Calvin’s Lab Theater and at 2 p.m. and 7:30 p.m. on April 12 in the same location (a performance given in conjunction with the Festival of Faith and Music), Grains of Hope will move on to many venues in the Grand Rapids area.

Grains of Hope was commissioned by Bethany Christian Services and Lutheran Social Services and funded through the McGregor Undergraduate Research Program Grant. While researching the play, Sandberg has encountered several area congregations that have effective refugee programs. She’s hoping the play will inspire other churches to reach out. “I think we’re supposed to be practicing radical hospitality—the kind of hospitality that makes you forget yourself,” she said.

For performance schedule, visit the Grains of Hope homepage.