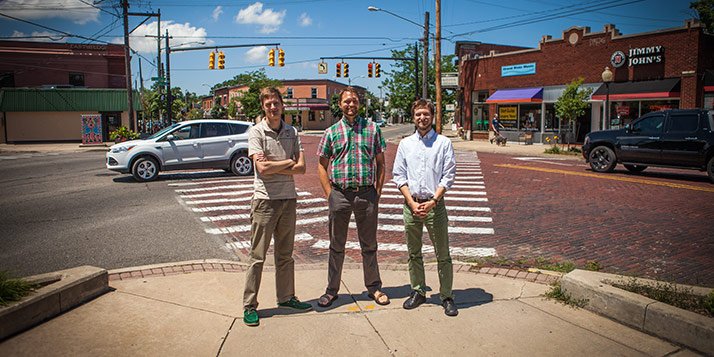 From an Eastown mansion that has been home to both lumber barons and monks in its long history, to a Heritage Hill home rumored to have several resident ghosts, GR Walks—a new walking tour app—tells the stories of Grand Rapids neighborhoods through their buildings. Tours include photos of buildings over the years along with brief histories.

Calvin alum Josh Leo developed the app and put it together with assistance from Calvin students working for the service-learning center. The first two tours, Eastown and Heritage Hill-North, are now available for download to Apple and Android devices.

The idea came to Leo on the road.

“I was driving around Grand Rapids and seeing buildings that were clearly important, but I had no idea why,” Leo recalled. “I’d think, there should be a way to learn this stuff.”

He remembered the Rick Steves audio tours he’d taken in Europe and set out to make similar tours of Grand Rapids neighborhoods.

Leo presented his idea to local history organizations; they didn’t bite. When Leo did get a bite, it came from an unexpected source: the Calvin service-learning center (SLC).

The SLC was already working on print walking tours of area neighborhoods when its associate director, Noah Kruis, heard about GR Walks. He asked Leo if he wanted to join forces. Leo did.

Stories on the hill

With plans to use the tours for service-learning programs like Streetfest and dorm partnerships, Kruis got a grant to pay several students to work on the project. The students—Allison Meyaard, Benjamin Stark, Cameron Navis and Kyle Schaap—helped research and write the histories for stops on the Heritage Hill-North tour.

Schaap enjoyed the process: “I loved learning the history! I was blown away at how interesting the story of Grand Rapids is … Really fascinating stuff!”

Schaap even did some myth busting when he researched 226 Prospect.

“It's widely believed that Frank Lloyd Wright designed this house, but it was actually his protégée Eugene Osgood that designed the house,” Schaap explained, though he added, “It’s very Wright-esque.”

In addition to architectural history, Leo wanted the Heritage Hill-North tour to capture the stories behind the houses.

Sometimes his search for these stories uncovered surprising details: “There’s one stop on Crescent St … The family that lived there were all great artists—particularly the women.”

One of those women was considered the finest ceramic artist in the Midwest.

The changing face of Eastown

Like Heritage Hill, Eastown’s history includes plenty of colorful individuals. But it was the evolution of the neighborhood as a whole that stood out to Owen Selles, who worked on the East Hills and Eastown tour as a research coordinator for the SLC last year.

“There’s definitely a theme of urban revitalization [in the tour]. It’s interesting to see how much change—both good and bad—has come about in Eastown even over the last ten years,” he said.

Selles based the tour on Calvin professor Lee Hardy’s Eastown tour. He said Hardy’s structure helped him to balance the educational and entertainment value of the tour.

“There was an interesting tension between showing the needs of the neighborhood and putting something together that people would actually enjoy in a walking tour,” Selles explained. “The framework professor Hardy provided helped me navigate that.”

Selles knew those neighborhood mainstays well—he was living in Eastown at the same time he was researching it.

“It was cool investigating the place I was living in,” he said. “You look at it differently when you know the history. It was especially interesting to look at the racial riots … There’s still lots of tension because of those riots, and it’s hard to understand why if you don’t know about that history.”

Kruis hopes the tours have a similar impact on the SLC students.

“We believe understanding the city has an impact on how you go about serving. A Calvin student might go into a place, see poverty and brokenness, and think it doesn’t have a lot to offer. [The walking tour] highlights the assets of neighborhoods and shows why things are the way they are,” Kruis explained.

“In order to understand the place you’re living in, you need to understand why it is the way it is. It makes the experience so much richer,” Leo said. “You value a place a lot more.”

Leo and Kruis are both excited to get started on the next tour. They plan to move the project into the classroom as a service-learning component of a history class next fall. 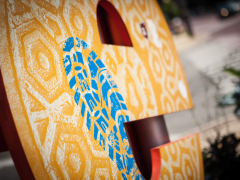 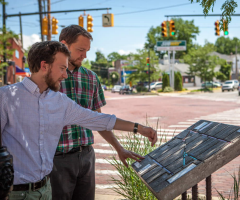