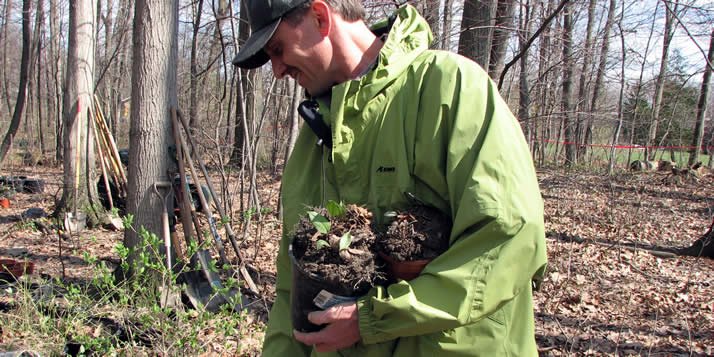 Calvin students Brian Schaap and Linda Van Andel see the benefit of their summer research every time they step foot on campus.

Calvin students Brian Schaap and Linda Van Andel see the benefit of their summer research every time they step foot on campus.

The senior biology students spent this past summer on a mitigation project, which involved native plant restoration and re-creation of forest habitat in various locations on campus. “I feel like our research project had a real positive impact on campus,” said Van Andel. “I think it was great that we could do this project, and we were learning things through it. It was a tangible accomplishment—our work is still out there.”

In fact, their work is evident in three places around campus—near the Burton Street entrance, north of Ravenswood guest house and around van Reken Hall—where unused or lightly used portions of lawn were turned into sustainable forest areas or landscaped with native plants.

The project was supported by a mitigation fund that was set up by the college to help offset the loss of nearly one-half of the woodlot just north of the new Spoelhof Fieldhouse Complex.

“When the first plans for the Spoelhof Fieldhouse Complex came out, they involved eliminating the entire woods,” said David Warners, the Calvin biology professor who oversaw the mitigation project. “When [fellow biology professor] Randy Van Dragt and I questioned whether we could save some of the woodlot, people were very open to considering alternatives.

“The woodlot in question is a really, really nice woods. There are a number of rare species and unusual plants; there is a very nice stand of trees—some 100 to 200 years old—and a Cooper’s Hawk’s nest in one of them.”

A compromise with the facility planning committee was reached resulting in some of the woodlot being saved and a fund was created to help mitigate the amount of the forest that was lost. That’s where the work began for Schaap and Van Andel.

The students spent the summer re-creating forest habitat and initiating a scientific study to measure the most effective methods for doing so successfully. Six areas were divided into quadrants in which altered depths of leaf mulch were spread for weed suppression and moisture retention. Tree and plant arrangements were also varied. (Many of the plants were rescued from the athletic complex site before the demolition and from a local cemetery that was clearing land). The students hope that their initial research will allow future students to determine the best practice for introducing forest ecosystems into previously managed landscapes.

“Up to this point most restoration wisdom has been accumulated by word of mouth,” said Warners. “The scientific rigor has not been as present as it should be. Over time we will be able to research this area and hope to contribute solidly to the conversation about restoration ecology.”

From manicured to "scrubby"

Schaap, who is co-chair of the student-run Environmental Stewardship Coalition, also hopes that the project will help to educate non-researchers about restoration ecology.

“At first, some people were opposed to our project,” he said. “They were worried that it wouldn’t look good.  We were taking these nicely manicured lawn areas and turning them into a scrubby forest.”

Surprisingly, aesthetics is a bigger hurdle than the cost, according to Warners. “I hear comments like, ‘It looks so messy,’ or ‘I like forests with big trees.’” Peoples’ perception of beauty is a one-species—Kentucky Blue Grass—neatly mowed lawn. What they don’t understand is the cost of maintaining that type of landscaping. If they factored in the cost of herbicides, pesticides and fungicides and the fossil fuel used for mowing and water, the appeal would start to erode.”

At least that is the hope. “My perception on what is beautiful landscaping has completely changed,” said Van Andel. “People think that a lawn is so wonderful and natural, but that isn’t restorative at all.”

“What I’ve learned in that last four years is that redemption is about all of creation, not just humans,” added Schapp. “Our job as Christians is to participate in the work of bringing about shalom—restoring right relationships. We are to imitate God as servants, but beyond serving other people, it’s also about serving creation. Projects like this are ways we can serve creation.”

While the research is ongoing, Warners also hopes to find other spots on campus that can be reclaimed as forested areas. “I’m pleased with the effort Calvin has demonstrated,” he said. “But I don’t want people to think that we know how to make forests now, so we can just tear them down and re-create a new one. Preservation should always be the first priority.”

Warners, though, also recognizes the necessity for some unforested area on the campus.  “I don’t want to convert every square inch of lawn into forest at Calvin,” he said. “I’m hopeful we can identify places on campus that very few, if any, people use—to convert from lawn into more sustainable forest.” 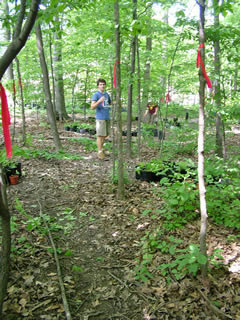 Brian Schaap at the woodlot 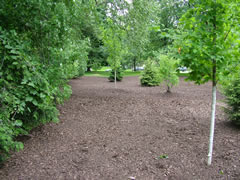