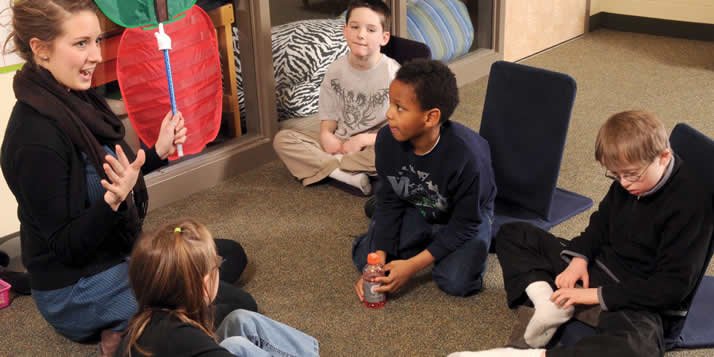 Jack Wiersma described it as a “perfect storm” in the best possible way. Tom Hoeksema defined it as a period of time in which a “confluence of circumstances” all came together. Based on their depictions, both educators recognized that the early 1970s was a special time in the education department at Calvin College.

“Reliving that time gives me some chills,” said Wiersma, who taught at Calvin from 1968 to 1994. “Thinking back it’s remarkable what happened in just five years.”

What happened in that time frame is Calvin went from no special education program to having a state-accredited program on the campus—something that would likely take many more years today. One of the reasons the “storm” began was because two then-Calvin education professors—Wiersma and Gil Besselsen—had special-needs children.

“Gil had a mentally challenged child, and I had a kid with Down syndrome,” said Wiersma. “Sherm [Wiersma’s son] was born in 1967, and options for education back then weren’t very good: Parents scrambled to rent some rooms at the junior college in the basement and do some teaching there. When it’s your family, you to start to think differently.”

At about that same time (1966), the Elementary and Secondary Education Act was amended to specifically provide federal support for the education of children with disabilities through the creation of Title VI. This brought special education into the spotlight nationally and prompted the initiation of programs in the Grand Rapids Public Schools.

“The federal government’s involvement was a very catalytic force in shaping the attitudes of the public,” said Wiersma, “and our [Calvin] students got in on it very early. Special Olympics didn’t hurt either.” (The first Special Olympic games were held in Chicago in 1968, with more than 1,000 participants from 26 states and Canada competing in swimming and track and field.)

Over the next few years, interest groups representing children with disabilities amassed major political support sufficient to expand federal involvement. In 1975 Congress passed the Education of the Handicapped Act (EHA, later amended as IDEA, the Individuals with Disabilities Education Act) requiring public schools to make available to all eligible children with disabilities a free appropriate public education in the least restrictive environment appropriate to their individual needs.

Parallel to the rising demand for special education teachers was increased interest by Calvin students to be educated so that they could teach students with disabilities.

“We wondered early on if there was any student interest in this,” said Wiersma. So he and Besselsen decided to test it out. In 1970 they offered an interim course, “Laboratory in Special Education,” a first-hand study of special education agencies and educational programs. “It was basically a one-month internship working as special ed coordinators and in special ed classrooms. Out of nowhere we got 40 students,” Wiersma said.

“These kids had a vision,” he added. “How do I account for their enthusiasm and desire to work with special ed students? These kids were ahead of the institution, seeing the necessity of teachers to help these kids.”

Their enthusiasm was catchy, and by 1972 Calvin was offering a consortium with nearby Grand Valley State College (now University) in special education.

“I still call it the ‘Miracle on Ice’ that this made it through the faculty vote,” said Wiersma. “Special education was still a foreign object to people back then. I was nervous through the entire vote that it wasn’t going to get through.

“A major roadblock for us was that getting a program approved by the state was a two- to three-year process,” he said. “Grand Valley’s program was already up and running, and we found such willingness by them to cooperate with us.”

“My interest in special education predates Calvin,” she said. “When my family came to the U.S. in 1966, we were nerdy Canadians. I was one of seven kids, my parents were old and we were weird. One of my neighbors was Emily Goote [who is intellectually disabled]; she was the most welcoming person I met here. She inspired me.”

Ellie Vander Beek Van Keulen ’74 was also among those in the first class to be awarded a special education certificate. “I am so grateful to Calvin for the Christian perspective on education I learned there,” said Van Keulen. “The Calvin classes and Grand Valley classes were distinctively different in that respect. My whole perspective was shaped by Calvin from knowing that the little details to all of life is God’s—including all of the individuals He’s made, even all of those outside the box. They are a gift from God, and that was very obvious at Calvin.”

Because of this distinction and other logistics, Wiersma and other administrators were working to bring the entire special education program under Calvin’s purview right from its inception.

That’s what happened in 1975 with the addition of Tom Hoeksema, a 1968 Calvin graduate, who was also influenced as a child by a neighbor with Down syndrome. “I was teaching at Pine Rest [Christian Mental Health Services] when I really got the bug that I wanted to prepare other people to do this kind of work,” he said.

“We needed somebody who really had the heart for it,” added Wiersma, “so we brought in Tom.”

Hoeksema had completed a graduate program in learning disabilities at Michigan State University and was tapped to fill the role of special education professor and adviser at Calvin, a position he has held for 35 years.  (Read a faculty profile on Professor Hoeksema.)

“It was important for Calvin to have its own program because then we were able to explore the theology of disability: Questions like, ‘How does being a Christian affect the way I think about disability? How do we see God’s image in people with obvious flaws? What does that mean about how, where and what we teach them?’” said Hoeksema.

For Hoeksema, a Christian perspective on disability has been his focus for his entire career, and he has seen a monumental shift in thought over the years.

“How people think about disability has changed; the world responds differently now,” Hoeksema said. “The lives of people with disabilities are so much different; they have opportunity to do things now that they were capable of doing all along, but society didn’t give them a chance. We now recognize that disability is socially constructed, and that it is societal perceptions that need repair more than the persons whom society labels.”

A corresponding transformational shift has occurred in the thinking about how to support students with disabilities in schools, and Calvin, in partnership with educators and the CLC Network (a consulting organization committed to helping schools provide educational experiences that include all students) has been at the forefront of the development of inclusive Christian education.

“For the last 30 years Calvin has worked with CLC Network and Christian schools to provide opportunities for students with special needs in typical school environments,” said Hoeksema. “More than 40 schools in Michigan that used to shut their doors to some kinds of learners are now open. I am so grateful for that because thousands of kids have now been able to experience all of the blessings of a Christian education in which diverse students learn side-by-side.”

Van Keulen, who has headed up the inclusive education program at South Christian High School in Grand Rapids for the last 16 years, has seen the enormous benefit of this. “I am eternally grateful to Calvin for being a proponent of the inclusive program. It totally changed everything,” she said. “It started by getting us educated in special education and then by adding inclusion.

“I grew up in segregated classrooms in the 1960s where you never ever saw a student with special needs,” she said, “and I have seen the tremendous benefit for students here at South—and I mean the benefit for all students. Special ed students have had the chance to develop their gifts socially, mentally and emotionally, and their regular ed peers love the chance to be a peer partner. It’s an area where all kids can be successful.”

Like Van Keulen, Uitvlugt, who is the executive director of Friendship Ministries, an interdenominational ministry that helps equip churches to include people with intellectual disabilities, looks back on her experience at Calvin and realizes its importance.

“God is the great inclusionist,” she said. “God already included these people, so we are obligated to do the same. We need Christians in special ed who see them as image bearers of God. I’d like to see those teachers be back in their churches pushing for spiritual growth for people with intellectual disabilities. I think Calvin and its graduates have the responsibility to affect the denomination.”

Hoeksema is glad to see that happening. In fact, he hopes for the day when special education isn’t viewed as “special” or separate from general education. “The evolution is towards more complex integration,” he said. “At first, some 60 years ago, we said, ‘Let’s create a special education school.’ Then we moved towards creating schools that included students with disabilities but in separate classrooms. Now we’re saying, ‘Let’s create schools that support meaningful learning for all learners in integrated classrooms.’

First, though, the department needs to find someone to continue leading the program in that direction, as Hoeksema is retiring this spring. “Calvin faculty need to be active at the Michigan state public policy level,” he said, “so that teachers can be cultural change agents in the schools. … God has given me this great privilege over the last 35 years, and it’s going to be hard to be less intensively involved in this. At this point, I’m trying to discern how to spend the next years of my life.”

It won’t be far from inclusive education, though, and Hoeksema is convinced that the mission for Calvin education graduates will continue: “We need Calvin alumni to be ambassadors for that inclusive vision in schools, in the church, in neighborhoods and in places of work or play,” he said. “Correcting societal views that disable people and restoring shalom through reciprocal service between people with and without disability labels is our square inch to redeem in God’s world because Calvin has the vision for it.”

This story is found in the Spring 2011 Spark. 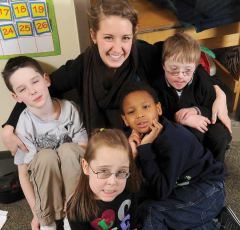 All students in Grand Rapids Christian schools are included in regular education classrooms.