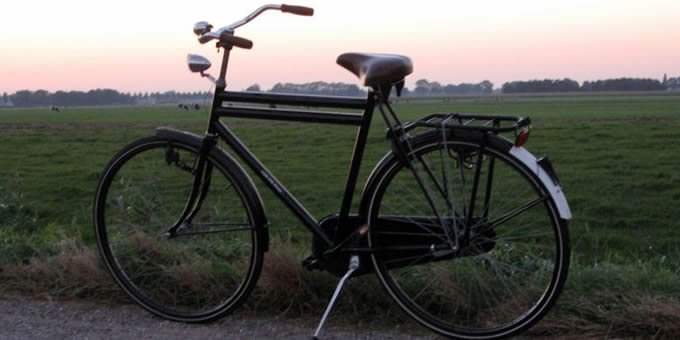 A Dutch cycling tradition becomes a part of ArtPrize.

Henk Aay plans to see the moving elephants and the birds’ nests while pedaling. Aay, and the people riding with him, will tour several of the outdoor sites of ArtPrize as part of Go Green, Go Dutch, Go Bike. The event, which celebrates the role of the bicycle in urban Dutch culture, happens 9 a.m.–12 p.m. on Saturday, September 25.

"In the Netherlands, more than any other country on earth, trips of under five kilometers—whether those are journeys to church or journeys to work or journeys to shop or to school—are undertaken on bike,” said Aay, a Calvin professor of geology, geography and environmental sciences.

The Dutch use their bikes for everything from dropping their children off at school to hauling heavy furniture, Aay said, and the bicycle is not merely the vehicle of the working-class. “The queen rides a bike. The Prime Minister rides a bike,” he said.

The Dutch preference for cycling, he said, is often chalked up to topography: “It’s flat,” Aay allowed of the Netherlands, “but (that’s) really only a small part of it.” The Dutch also have a financial motive for cycling everywhere: “The bicycle really is the only affordable way to get around,” Aay said.

There won’t be any royalty riding on Go Green, Go Dutch, Go Bike, but Grand Rapids Mayor George Heartwell and Dutch Honorary Consul General Paul Heule will see the riders off in front of the Van Noord Arena. The Calvin riders will join members of the Grand Rapids Wheelman and Pedal GR on the trail, which will push off at Van Noord and travel down Fulton St. and through downtown Grand Rapids (taking in the ArtPrize sights) and back to campus.

The event, sponsored by the Frederik Meijer Chair in Dutch Language and Culture costs $15. Five dollars out of each 15 will benefit The Motion Initiative: an urban cooperative youth bicycling ministry. Each rider will get an orange Go Green, Go Dutch, Go Bike t-shirt.

The original Go Green, Go Dutch, Go Bike was hosted by the Dutch Consulate in Toronto, which wanted to promote Dutch cycling as an environmentally friendly model for other countries. Since it was launched, several U.S. have held their own Go Green, Go Dutch, Go Bike events. Aay, who was born in the Netherlands, would love to see the Dutch bicycle-friendliness take hold elsewhere. “When I am in the Netherlands on a bike, the cars are very aware of me,” he said, “which is not true in various North American cities.” 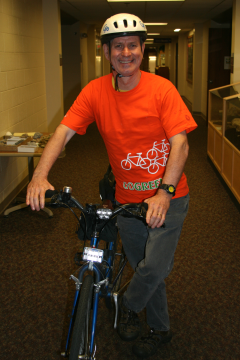 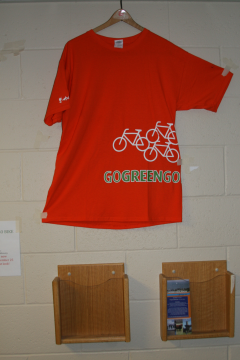