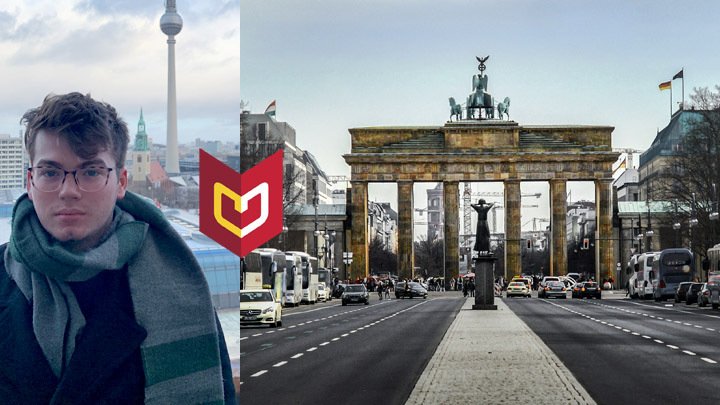 “It wasn’t easy—there was a lot of work that went into it,” said senior student Alec Twining. “But it was definitely worth it.”

Twining, a double major in electrical engineering and German studies, has taken at least 17 credits every semester and completed a rigorous engineering program—all while also studying abroad both for an interim and a semester. His hard work has paid off, though, as he was recently accepted into next year’s Congress Bundestag Youth Exchange for Young Professionals (CBYX) program in Germany.

This selective program, funded by the U.S. Department of State and the German Bundestag, provides 75 American and 75 German young professionals an opportunity to spend a year in each other’s countries. Per the program’s requirements, Twining will be spending two months in intensive German language training, taking one semester of engineering classes, and completing a five-month internship with an engineering company.

“I was attracted to this program because it allowed me to use both of my majors. To use German while being able to work at an engineering company is really appealing,” said Twining. “Specifically, I’m looking toward the German auto industry. Being able to work with the best of the best in terms of engineering in the automotive industry is exciting to be a part of.”

A requirement turns into a passion

As a high school senior, Twining knew that he wanted to study engineering at Calvin, and he was interested in the department’s summer program in Berlin, Germany. The program requires that students take at least one semester of German before the trip. So, during Twining’s first visit to Calvin, he met with German professor Corey Roberts to discuss how to be best equipped for his time in Germany. Together, they decided that Twining would take German classes during both semesters and the interim of his first year.

For Twining, the connection was instant. “Really, in the first month or so, I just fell in love with German, and I was hooked,” he said.

Twining admits that he did not have the same passion for learning languages in high school as he does now.

“I really didn’t enjoy learning languages in high school. Calvin’s German department made it a lot of fun and made me want to learn more,” said Twining. “I think that the difference is maybe two-fold. One, I knew I was working towards something specific: gaining understanding for actually being in Germany. Two, I think my professors have the passion and the understanding to teach me in an engaging way.”

“The German studies program at Calvin prepares students to be effective and culturally sensitive communicators in the German language and attuned to and appreciative of cultural differences and diversity in worldviews,” said Roberts. “At Calvin, this work is seen through the lens of our mission as Christians to engage and care for our neighbors across the globe. This vision animates the German Studies program’s efforts across all of our programming, from introductory language instruction to mentoring for post-graduate opportunities.”

With two majors, it took some careful planning for Twining to fit everything in while also being able to study abroad. Roberts, along with Professor Randall Brouwer, Twining’s engineering advisor, helped him make it work.

Twining’s goal is to work for a German automotive company that is based in the United States. He would like to go between both countries and help the two branches communicate.

“Pairing German studies with another field of study has a range of real benefits. While proficiency in German is especially helpful in a number of fields, like STEM or arts and humanities disciplines, we like to think about it also in terms of its potential for enriching one’s life and work,” said Roberts. “Proficiency in language and navigating a different culture opens doors of opportunity that are professionally and personally rewarding.”

As Twining reflects on his time at Calvin and looks towards his future, he is thankful that Calvin introduced him to German.

“A large part of me getting into German was circumstantial to the engineering program’s requirement. And then I just sort of fell in love with it. If I hadn’t come to Calvin, I definitely know that my German experiences would be less, if not zero,” said Twining. “Looking back now, it is especially good that I came to Calvin for engineering, because with its liberal arts focus, I was able to get a German major as well. That wasn’t something I came into Calvin wanting, but I’m very thankful for it now.”