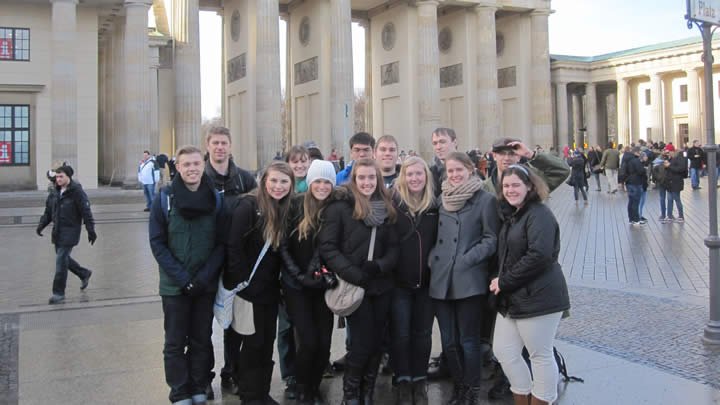 Corey Roberts (back left) and his students in Berlin during 2014 Interim.

Immersed in the story

Roberts will spend much of his time conducting research in archives and university libraries and completing a book manuscript. His work will focus on the narrative tradition of novels and storytelling and its lasting impact even into the present day. He noted how much more effective stories are for conveying experience-based truths than simply listing facts or crafting an argument.

“Things based in someone’s personal experience are so much more interesting and compelling than reading something described second-hand, like in a textbook. Stories are always more effective because of the way a listener can identify with the storyteller and his or her narrative, instead of just receiving sterile information” said Roberts.

Roberts has fostered his fascination with the art of storytelling for much of his academic life. “In college I was drawn into history and German as a double major and became interested in the interplay of language, narrative and history.”

While in Berlin, Roberts will be studying the development of narrative and fiction from German Pietism into the 19th century. He will be exploring the tradition of Christian confessional literature and its communication of conversion’s moment of transformation—a form that goes back to St. Augustine. He sees the efforts to communicate the “aha moment” of conversion through autobiography as a foundational building block to modern fiction and storytelling.

Immersed in the culture

After spending considerable time working on this topic, Roberts is excited to have this opportunity to begin bringing his project to completion. “Now I’m getting to move on to the final phases of research and writing. I’m excited to be in Berlin, to have the opportunity to study, write and immerse myself in German culture,” he said.

Part of cultural immersion is language and communication. Roberts noted how much language affects expression, “When you’re learning another language you obviously have to learn the grammar and syntax; in the process though, since we ultimately view the world around us through language, you also open yourself up to seeing how another culture views the world,” he said. “You ask, ‘How do they tell their stories and how do I tell mine? When we tell our stories, what are we trying to express? What is it about language that makes it easy or difficult to express who we are?’”

Not only do languages give insight into relational expression, Roberts says that they also open up new perspectives on both the world and one’s self. “When communicating in a language, whether your native language or a second language, you are really taking on a particular perspective, inhabiting a certain way of seeing the world. With language learning, if you learn and become somewhat proficient you also become more sensitive to and appreciative of different cultural perspectives. In a North American context we often assume that it’s the responsibility of other cultures to learn our language if they want to communicate with us, which negatively impacts our ability to act graciously. In learning another language, we equip ourselves to do a better job of offering grace across linguistic or cultural barriers,” he noted.

Roberts says he enjoys the diversity that language brings and looks forward to the many opportunities that this prestigious award affords him. “What I like about language study is that you can engage nearly any part of a culture,” he said. “It’s not just about learning the basics and then literature; it’s much broader. You can examine the vast beauty of cultural differences through language study.”

Advancing a reputation of excellence

The Fulbright Program, an international exchange created in 1946 to increase mutual understanding between the people of the United States and other countries, has afforded numerous Calvin faculty and students in recent years the opportunity to dig deeper into various topics. In fact, the U.S. Department of State’s Bureau of Educational and Cultural Affairs, which administers the program, recently named Calvin a top-producing institution of Fulbright U.S. Scholars. Calvin is one of just six bachelor’s institutions in the nation to have at least two faculty members awarded Fulbrights during 2014-15.

And Roberts’ recent award continues that tradition of excellence in research at Calvin.

“We are really fortunate to have top-flight faculty like Corey Roberts, who can attract awards like this,” said Matt Walhout, dean for research and scholarship at Calvin College. “I am happy for him, not just because of his outstanding scholarly accomplishments, but also because he will get to share this time in Germany with his family. For Calvin as an institution, this is a chance once again to celebrate the excellence of our faculty. For Corey, it is an amazing professional and personal opportunity.”

Roberts, his wife Brynne and their three daughters, Anneke, Elena and Vivian, will live in Berlin from February to June, 2016. 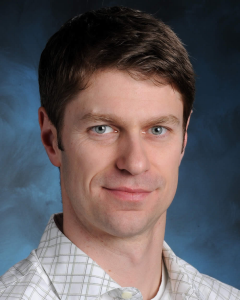