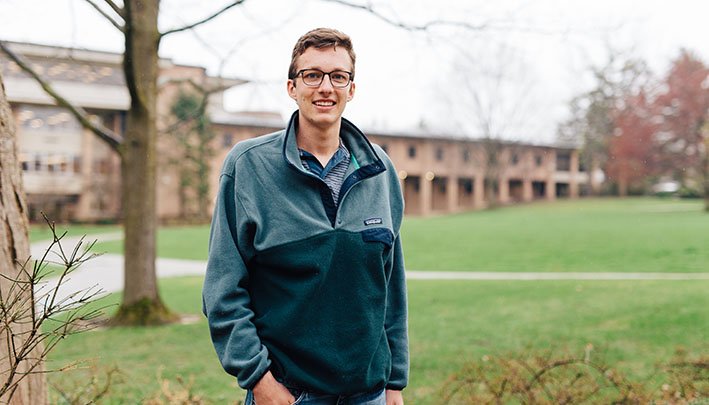 In 2017-2018 Micah Warners, a Fulbright Finalist, will be teaching in Honduras.

Micah Warners is passionate about urban education, the Spanish language and the environment. And beginning in Fall 2017, he will have an opportunity to pursue all three of those interests as a Fulbright Finalist.

“This Fulbright gives me an opportunity to do work in all three of these passions,” said Warners (Grand Rapids, Mich.), who is graduating in 2017 with a triple major in integrated science studies, biology and Spanish, and with certification in secondary education.

The Fulbright is awarded by the U.S. Department of State and the J. William Fulbright Foreign Scholarship Board. Warners will be one of 1,900 U.S. citizens who will study, conduct research and teach abroad in the 2017-2018 academic year through the Fulbright U.S. Student Program.

Warners will be heading to Honduras through an English Teaching Assistant (ETA) program grant. He’ll be teaching students (ranging in age from 13 to 20) English through an English Microscholarship Program. The program has been implemented in various countries and seeks to increase educational prospects and job opportunities for students from economically disadvantaged sectors, primarily by providing classes—in this case English classes.

“The program is really cool because not only is its goal to help improve the education of individuals, but it also aims to address poverty through teaching English,” said Warners. “My understanding is that learning English provides more opportunity for young people in Honduras, and this is the kind of work I am really excited about being a part of.”

Warners’ interest in Honduras started during his freshman year. Warners said as a freshman he had a roommate from Honduras and learned a lot through his friendship with Enrique.

He said he later created a unit plan centered around Honduras in an education class and was able to spend a semester abroad in Peru, “which I think may be the best preparation I have had for the Fulbright,” said Warners. “Being able to live in and learn about a different culture from a humble perspective … was an incredible opportunity.”

The ETA grant runs for 10 months with Warners spending 20 to 25 hours a week teaching English and the rest of his time working on a supplementary project of his choosing. He says he’ll probably wait until he arrives in Honduras to decide on what project to take on, but he’s thinking about either starting a community garden or doing some work with a nonprofit.

“I see the Fulbright as an opportunity to gain experience working in an urban education environment, and will hopefully assist in further opportunities in this field,” said Warners. “I have so much to learn in this vocation, and I hope and pray that the Fulbright will be a good learning experience.”

Since its inception in 1946, the Fulbright Program has provided more than 370,000 participants—chosen for their academic merit and leadership potential — with the opportunity to exchange ideas and contribute to finding solutions to shared international concerns. Over 1,900 U.S. students, artists and early career professionals in more than 100 different fields of study are offered Fulbright Program grants to study, teach English, and conduct research annually in over 140 countries throughout the world.

The Fulbright Program is funded through an annual appropriation by the United States Congress to the U.S. Department of State and managed by the Bureau of Educational and Cultural Affairs. Participating governments and host institutions, corporations, and foundations in foreign countries and in the United States also provide direct and indirect support.