From the archives: Heffner wants students to enjoy music 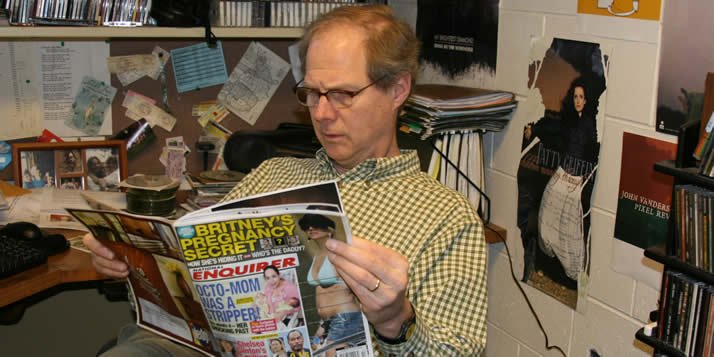 Calvin student activities director Ken Heffner has eclectic taste both in music and what he reads to learn more about what's hot and what's not. Peek into his crowded office in the Commons Annex and you're apt to find the Banner, Rolling Stone, Comment, Sojourners, Christianity Today and more lying on his desk or side table.

Which is why in any given school year concerts at Calvin run the gamut from Lupe Fiasco to the Blind Boys of Alabama to Phil Keaggy to Switchfoot.

But lately Heffner's felt as though he were missing something. "We bring in a lot of acts that require thinking," he said, "what we call discernment. But sometimes that's hard work, harder work than even I like to put in."

So Heffner is looking to add one concert a semester as part of a new "Check Your Brain at the Door" concert series or CYBAD for short. It will be nice, he said, for students to be able to go to a show where they can just enjoy the music without worrying about the artist's worldview or even really paying attention to the lyrics.

"Plus," said Heffner, "we're competing now with PlayStation and Wii and Xbox for students' time and attention and CYBAD has sort of a cool cyber-space feel to it. And we think it's a little edgy 'cause the word 'bad' is in there. So we're hopeful this will really fly."

Heffner and his SAO colleagues are currently researching acts for 2009-2010, but students are already excited about the possibilities for next year.

"I go to a lot of Ken's shows," said Mandy Barlowe, an international development major from Seattle, Wash, "and they're great and all, but sometimes it's nice to just not worry about what you're listening to. Just to take it all in unthinkingly can be so freeing."

Barlowe doesn't have any suggestions for Heffner and his team at this point, but she likes the CYBAD acronym.

"I could even see it as a Facebook status update," she said: "Mandy Barlowe is CYBAD. That would be cool."