From life sentence to meaningful life 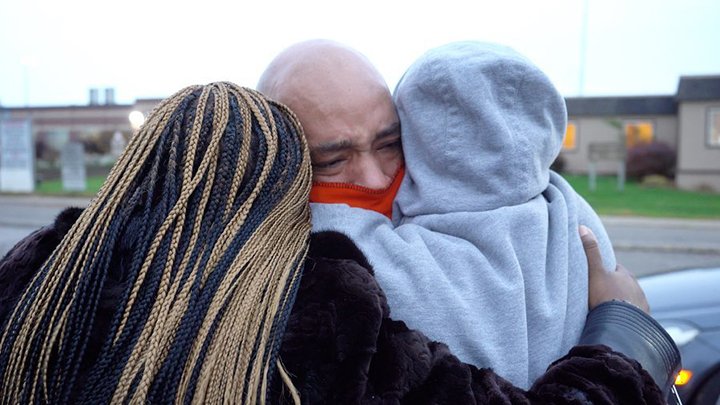 Marqurice Jackson grew up in a low-income home in Flint, Michigan. He started seeing older guys in his neighborhood making money selling drugs, and soon saw this as an opportunity for himself.

“You start getting money and your identity starts to change, from having nothing to having everything,” said Jackson.

These behavioral patterns soon got Jackson into big trouble. At 17, he got into a fist fight at school, the guy he fought died of his injuries. Jackson got a year in county jail, and five years probation.

But when he got out?

“I didn’t learn my lesson, went right back to doing some of the things that led me up to that crime.”

Two months into probation he cut off his tracking device, and he was on the run. During this time, he confronted someone who had a dispute with his family. Words were exchanged. A shot was fired. And in that moment, a life was lost.

No. Two lives. Marqurice Jackson was sentenced to life in prison for second-degree murder.

End of the road

“I didn’t understand what that time meant,” said Jackson.

But, he would have plenty of time for it to sink in. He was trapped with his thoughts and inside 20-foot barbed-wire fencing.

With that hurt and the reality of the situation sinking in, hope started to fade.

For the next 17 years, while Jackson’s scenery changed a number of times (being moved from correctional facilities in Detroit to Lapeer from the Upper Peninsula to Ionia) his outlook did not.

“I did lose hope. Because it felt like a lot of people gave up on me, and so when you lose that hope, you kind of lose yourself.”

But, in 2015, something changed. Jackson was taking a non-accredited class offered at Handlon Correctional Facility, really for the purpose of improving his reading skills.

“I liked two of the teachers who came in,” said Jackson.

Jackson, who dropped out of school in eighth grade, was taking a class taught by Calvin University English professors Gary Schmidt and Nancy Hull. In the class, the students were reading a novel per week and writing a one-page reflection on each book.

“I started liking that,” said Jackson.

Seeing a window of opportunity

It piqued his interest and provided a glimmer of hope. He wanted more.

The Calvin Prison Initiative (CPI), a partnership between Calvin University, Calvin Theological Seminary, and the Michigan Department of Corrections that offers inmates a bachelor of arts degree from Calvin University in Faith and Community Leadership, had just started at Handlon Correctional Facility. And Jackson had seen some of his peers in his class being accepted into the program. So, he applied.

“I got denied the first time,” said Jackson. “So that kind of made me mad.”

But his hunger for learning wouldn’t let him just sit with that emotion.

So, he called Ronald Simpson-Bey, someone who knew well the position he was in, having served a sentence of 27 years in the Michigan prison system, and asked for help.

Simpson-Bey is seen as a trusted mentor for inmates. He spent his time inside prison walls wisely—founding many enrichment programs rooted in transformation, redemption, and self-accountability, and is now spending his time outside prison walls working for prison reform.

“He asked me, ‘what have you done [in prison] for me to help you?’,” said Jackson.“And I had nothing to give him.”

So, Jackson got to work: participating in programs, going to church, getting a job cutting hair in a barber shop at the prison. In essence, building his “resume,” so to speak.

And then opportunity came knocking.

“Luck would have it they needed someone to clean the floors for the classrooms [where CPI classes were being held],” said Jackson.

So, Jackson asked Inspector Blackmon for the job. And whether he was cleaning floors or helping with any other number of tasks that came up, Blackmon started to recognize Jackson’s work ethic, commitment to excellence, and reliability. So, a year later, when Jackson applied again to the Calvin program, he now had a strong reference.

This time his application was accepted. And with it, hope returned.

“It was amazing, this was the biggest accomplishment in my life,” said Jackson. “After that [acceptance letter was received], the sky was the limit.”

Jackson was excited, but nervous to start the program.

“Every class that I take to this day, I get nervous, because it’s a struggle. Academics wasn’t really my strong suit. So, I feel like in class I’m a little kid on his first day of school every time it starts.”

He was soaking up the experience … and experiencing change.

“If Calvin was just a regular program, it wouldn’t have changed anybody,” said Jackson. “Everyone who is in the program comes from different religions, some from no religion at all. But the classes deal with a lot of religion, so it forces you to think about your upbringing. In something you might read, you’d think about that, and it constantly yanks on your heart. And after yanking on your heart, you slowly begin to change.”

And that change was being seen among his fellow inmates at Handlon Correctional Facility, even those not in CPI.

“Sometimes I’d make copies [of handouts] for class and let the other guys in another unit read them because they wanted to read the schoolwork,” said Jackson. “They’d pass this paper around their whole unit, they’d read it, and be like ‘wow!’”

When inmates found out Jackson was in the program, they’d ask him how he'd got in?

His reply: “You just got to change your ways and apply yourself.”

The first year, Jackson’s dad attended. “It was the first time he ever told me he was proud of me,” said Jackson fighting back tears. The next year, his mom and cousins attended the picnic, and they were invited to write a note of encouragement. They told Marqurice they were proud of him. The following year, a friend attended and then visited him afterwards.

“That makes me feel good, that now my family is starting back to believe in me,” said Jackson.

Jackson’s actions were speaking loudly. And his life was changing. And people were noticing.

On July 28, 2020, Jackson was given a public hearing before his parole board. They told him the board would have a decision within 30 days. He was in a waiting game, not trying to get his hopes up.

On September 2 … 22 years after his life sentence … he got some news.

“I just sat in his office [the counselor on his unit] and cried,” he said. And then Jackson got on the phone and called his mom and said, “your baby coming home.”

On October 27, Jackson left the Handlon Correctional Facility a free man, released of his life sentence, sent out with a whole new perspective on life.

“It rebuilt me. It tore the old person down. And it rebuilt a better person,” said Jackson of his experience in CPI. “I just watched a show called Yellowstone. And I see myself as the trailer park [in that show], and Calvin as the tornado. It came and tore me down, and it rebuilt me.”

And now, once he finishes his degree on Calvin’s main campus, he’s hoping to help rebuild the community he came from.

“It literally looks like a jungle out there. You don’t see kids playing in the streets or on swings,” said Jackson. “I was there for five days straight recently and what I did see were mattresses in the middle of the road, clothes and stuff everywhere. If I can go back and help that community out with this degree somehow that is what I'm going to do.”