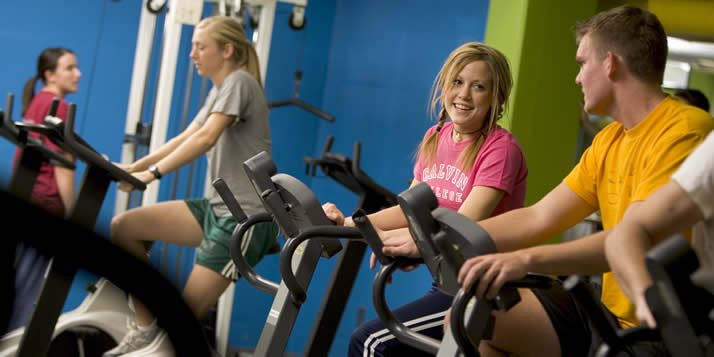 Students working out in the fitness center.

After a year-long process, which included reviewing the department's many academic programs and courses, HPERDS—the acronym stands for health, physical education, recreation, dance and sport—also had a name change approved by its faculty and the faculty senate. Hereafter the HPERDS department at Calvin College shall be known instead as the kinesiology department.

Bolt said the name change creates a better umbrella term than the old HPERDS acronym and will benefit the department's students, especially as they head to graduate school and the job market.

The art and science of human movement

"No single word is perfect, given the breadth of our department," said Bolt, who also coaches men's golf at Calvin. "Yet we believe kinesiology has become the best, single term to represent much of our field of study and the programs represented in the department. We intend to define kinesiology in the broadest possible way—as the study of the art and science of human movement—and, in that way, encircle the many programs we offer in our department.”

Kinesiology is, Bolt said, the most recognized term in the physical education and recreation field.

While the department’s name will change, the quality of education will remain the same, Bolt said: "We need to be known for more than our name We need to do good work. We have in the past, and we will in the future. No name change will cover or change the fact you're not getting it done. And we have been getting it done."

Annika Soule thinks the name change is fitting. Soule is a senior from Holland, Mich., who is studying exercise science at Calvin and plans to become a physical therapist (she already has been accepted to graduate school). She said she's happy about the name change and believes it will benefit future students.

"Kinesiology will carry more prestige," she said. "I think that it clearly communicates that Calvin is profoundly academic and indicates exactly what unifies us as a department, which is movement—the study, appreciation and application of movement in all its shapes and forms. I think it also advertises to the rest of the campus and to the greater community a clear sense of Calvin's possibilities. HPERDS isn't a recognizable acronym, and this reduces that confusion."

Senior Trent Salo, who is headed to graduate school this fall at the University of Kentucky, echoed Soule's words. "Using the name kinesiology will enable employers, graduate school admissions and other students to understand exactly what our major entails," the Rudyard, Mich., native said.

But, like Bolt, both Soule and Salo said that what the department does for its students is more important than the name on the degree.

"I think that I have been blessed to have class with almost every single professor in the kinesiology department … ," said Soule. "They have been incredible advisors when it came to choosing classes to take to become prepared for physical therapy school to helping with recommendations for physical therapy schools to helping me decide between the programs I was accepted into. And it's not only that; they and many of the other professors have been such awesome examples of faith."

Salo agreed. "From the first day I stepped on campus," he said, "I felt that the professors and faculty within the department, specifically the profs who teach exercise science, were genuinely concerned about my academic progress and career aspirations."

Both students were able to work this year on campus as personal trainers and said the new facilities in the Spoelhof Fieldhouse Complex, including the new labs, new fitness rooms and more, were invaluable assets in that work.

"It is reassuring to know that the equipment we are using, especially in our exercise laboratory, is top notch," said Salo. "I would put our facilities and equipment against any other college or university in the nation."

Salo worked this year with a recreational athlete who had suffered a torn hamstring, while Soule worked with a client with multiple sclerosis (MS).

"Not only have I been stretched to come up with unique workout patterns, but I've learned so much about identifying with people and how to provide them with measurable goals,” Soule said, “Every single person has their own fears, expectations and reservations. As a physical therapist, I have to know how to work with that, not to ignore that, but to work with them. People with MS have a lot of barriers to exercise. If I can help them move beyond their fears, I feel like I have accomplished something big. I was able to do that with my client this past semester, and it was such a rewarding experience."

Salo, a varsity basketball player who struggled with his own injury, a broken foot, his senior year, concurred. "It was great to be able to apply the things we learn in class to our sessions with our clients," he said. "It definitely helps to solidify the important concepts within our field. The hardest thing I found out was judging the exertion level of my client. Oftentimes, I had to flat-out ask my client if the exercises were too difficult because I wasn't sure based on their expressions. That is an aspect that cannot be learned in the classroom."

Such comments are music to Bolt's ears: "We believe our major is a great option for Christian young people who want to explore God's gifts of movement and health and leisure," he said, "and we hope the new name will open up our department to even more students." 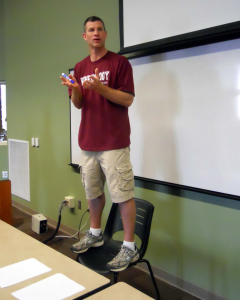 A kinesiology prof makes a demonstration

Within the new kinesiology department students can choose a number of different emphases as part of their course of study, including an exercise science program, a pre-professional program—leading to graduate-level education in physical therapy, for example—a sport management emphasis and a K-12 physical education program. There also will be two recreation majors (one with a therapy emphasis and one with a leadership emphasis) and minors in recreation, health education and dance, plus a pair of kinesiology minors. "We do believe we have a lot of opportunities available for students, and our track record in terms of jobs and graduate school is really good," said Bolt, "We are hoping to do a lot of internal and external communication around this name change and let people know what we have to offer and that we stand ready to serve them."


From life sentence to meaningful life


Calvin University opens a new door for students with disabilities