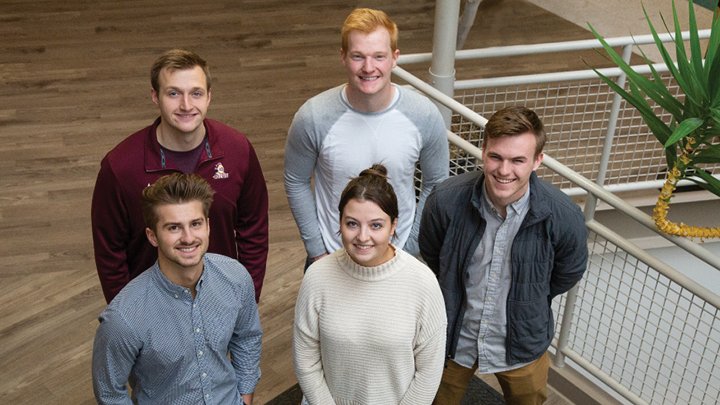 Year after year pre-med students graduate from Calvin University and head off to medical school. Every graduate has a shortlist of schools they’d want to attend. For many of these grads, they are accepted into one of their top choices, and they credit their preparation at Calvin for opening these doors. We interviewed six graduating seniors who are headed to med school.

Throughout his time at Calvin, Priebe has gained experience volunteering to help benefit underprivileged communities and exercise his medical knowledge as he learned it in the classroom. He’s been accepted to his top choice graduate program and will pursue medicine to become a family physician. Priebe holds great excitement for his graduate experience, voicing that he wishes to “integrate skills learned in the classroom with [his] desire to connect with and care for individuals in [his] community.”

Before attending Calvin, Hayden had LUCOM on his radar for its Christian roots and positive reputation. After many applications, Hayden was blessed to receive eight total acceptance letters, and after much deliberation and prayer settled on LUCOM. He appreciates the curriculum Calvin provided him, particularly for his preparation and success on the MCAT.

“The extracurricular, research, and leadership opportunities that I was able to utilize also strengthened me as an applicant by giving me strong talking points to cover in my secondary applications,” says Hayden.

In the future, he hopes to build his own practice close to home with whatever passions and skillsets he gains throughout his hands-on medical experiences.

Stearns’ passion for medicine was realized by The Mayo Clinic, his top choice for medical schools. He reflects that his experiences in Calvin’s rigorous liberal arts format shaped his beliefs and gave him ways to answer and approach difficult questions and situations. He’s excited to meet new people in Phoenix and continue to pursue medicine alongside others who have the same passions.

“I am excited to just explore various clinicals throughout medical school with an open mind to find what I'm most passionate about.”

Stearns is letting his passions and experiences steer him in his career direction, but he does hold interest in cardiology. His experiences at Spectrum Health during his time at Calvin put his aspirations in perspective, exposing him to many different concentrations within medicine.

MSUCOM was one of Hoekwater’s top choices for medical school, with its mission aligning with hers and the school’s close proximity to the communities she wishes to serve in Grand Rapids. She feels “that Calvin does a good job of promoting group-work skills and an appreciation for varied perspectives which [she] anticipate[s] will be very helpful in medical school and medical practice.”

Hoekwater is thrilled to join a team of medical professionals, learn from them, and be a vital part of a growing medical community that loves and supports patients and each other. Her excitement also lies in pediatrics and women’s health, which she hopes to develop in underserved areas of Grand Rapids.

While DeYoung has not yet committed to Wayne State, he has received acceptance and is leaning toward attending for med school. He relates his undergraduate success to the mentorship he received from STEM professors and exemplary and inspiring colleagues in medicine.

“I am looking forward to diving deep into challenging medical academic material, developing new friendships, and moving to a new city,” says DeYoung.

DeYoung would like to continue his research and join a fellowship after he finishes medical school.

Currently weighing his options between two well-established graduate programs at two great medical universities, Sculley is on the right track to medical success. He plans to visit both campuses to decide which one he will officially choose to attend. Calvin provided many opportunities for learning and research beyond the classroom that led Sculley to perform well on the MCAT and participate in programs such as the Rare Disease Lab at Calvin. Sculley is excited “to meet and learn alongside students with a similar passion for medicine.” After med school, he’d like to do a residency to gain more valuable hands-on experience.

All six med-school-bound students advised both incoming and current medically interested students to get experience in hospitals before graduating. Teri Crumb, Calvin’s pre-med advisor, notes that there is no shortage of opportunities for students interested in gaining experience while working on their degree. She says Grand Rapids is a hub for medicine, noting that four major hospital systems are located just 10 minutes from campus (Spectrum Health, Mary Free Bed, St. Mary’s, and UM Health.)