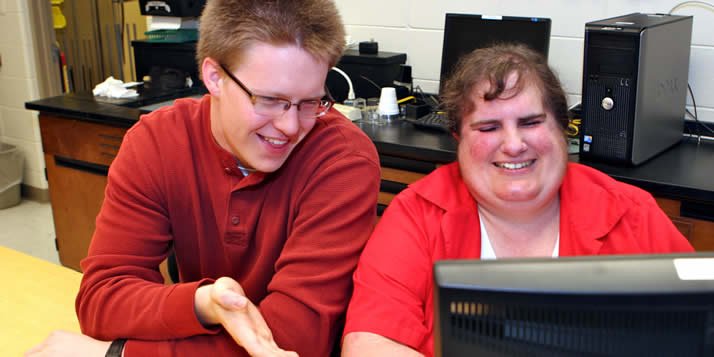 A blind student tackles premed with help from student and faculty colleagues.

Since Marcia Beare was in high school, she’s wanted to be a doctor. But the first time she studied at Calvin, she followed the path society laid out for her: She prepared to become a social worker.

“The ‘quote, unquote’ professionals told me that was a socially-acceptable job for a blind person to do,” said Beare, who lost her sight at age two due to a rare childhood cancer.

She followed that counsel, earned her bachelor’s degree in sociology at Calvin and went on to get her master’s degree in social work from Western Michigan University. But it wasn’t what she loved doing.

After graduate school, Beare served as executive director at the Martin Resource Center, a free clinic in Martin, Mich. She credits the clinic’s medical director, Dr. Christopher Fish, with reigniting her desire to pursue a pre-med path.

Beare remembers Fish telling her: “I’m tired of you complaining that you always wanted to be a doctor. Why don’t you just go back and do it?”

That simple phrase stuck with Beare. In fact, it got her back to class. In Spring 2011, Beare returned to Calvin’s campus and started the journey to becoming a doctor.

After diving into courses in the fields of math and science, Beare quickly noticed a gap between her comprehension and that of her classmates. In Beare’s statistics course, mathematics professor Thomas Jager asked students if anyone would be willing to help her outside of class, and junior Ryan Burkhart volunteered.

But their first tutoring session wasn’t exactly a smooth one.

“The full gravity of Marcia’s blindness just became evident to me very quickly,” Burkhart shared. He recalled taking Beare’s hand over a graph to help her understand its shape, but not feeling certain he was making any progress.

Beare confirmed that he wasn’t.

“I think there was just a tremendous amount of communications barriers the first time we tried to work together,” Beare said. “My impression as far as having Ryan as an assistant wasn’t overwhelmingly favorable,” she said with a smile. “I couldn’t understand where he was coming from.”

Perhaps what posed the greatest challenge for the duo was long division. But that lesson came with a breakthrough.

Since Braille is read linearly, the concepts of a numerator and denominator were unfamiliar to Beare, not to mention her professor’s instructions of “flipping them around” in order to use a fraction’s inverse.

Burkhart described one creative division exercise he used with Beare: “One time in physics lab, I … put cups and beakers over everything and said, ‘Ok, Marcia, you know the rules of multiplication and division. Move all this stuff until you get just the beaker by itself.’”

The exercise worked, and illuminated the solution for Beare.

“But you forgot the ink pens,” Beare corrected Burkhart’s account. “You gave me two ink pens and said, ‘These are your division bars, use them wisely.’”

It takes a village

There are other students Beare turns to for assistance, and she usually approaches them with one of two phrases: “Can I pick your brain?” or “Can I borrow your eyeballs?”

Beare works with junior Amanda Doyle for an hour a week when their schedules allow. Doyle tutors Beare in physics and uses a computer program to record chemistry exercises as audio files.

Physics professor Loren Haarsma also connected Beare with students in the physics reading room after what Beare admits was a difficult semester.

“And then,” Beare added with a chuckle, “he left me there.”

Sophomore Andrew Hess and junior Christian Woolley are often on-hand to help Beare when she stops by the reading room.

“Never, ever, once have they ever been upset because I asked them a question.” Beare said of her collaborators.

But the encouragement goes both ways.

Amidst the long list of attributes the other students said they value in Beare are her stick-to-it attitude and her willingness to share her experiences.

“Marcia has such a rich life story,” Burkhart said, “And it gets richer every day.”

It's a story Haarsma has watched unfold through Beare's time in his Physics 221 and 222 courses.

"I've seen her make amazing progress," he said. He sees Beare headed toward a career in the medical field and speaks with joy of his role in helping her get there.

Haarsma regularly records additional information and explanations for Beare’s audio assignments. This ensures that Beare’s software reads complex equations correctly and that she understands what is being asked of her. He also spends extra time grading Beare's specially formatted homework.

But Haarsma is quick to change the subject from his own work to the work of the students who have walked alongside Beare.

"Again and again I see Calvin students willing to be helpful," Haarsma said.

Thanks to that assistance, Beare is progressing through the undergraduate work that will prepare her for a career as a physician.

And should anyone remind her of the years of work ahead, she might just smile and throw back those motivating words: 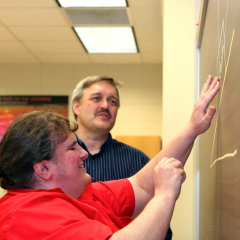 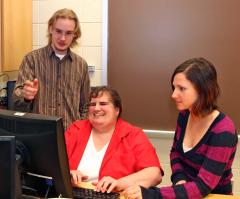