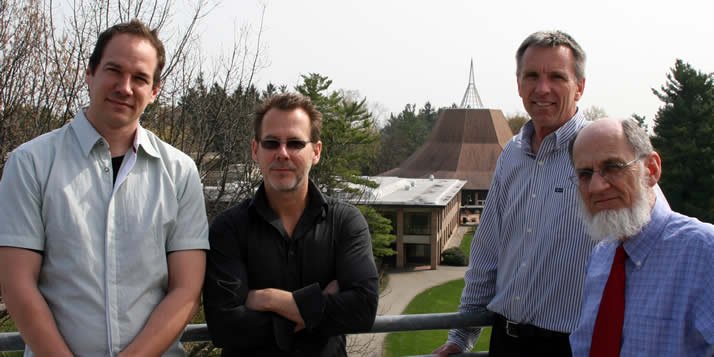 Four Calvin professors from four different disciplines were numbered among "The 300 Best Professors" from the Princeton Review.

On April 2, 2012, The Princeton Review released The Best 300 Professors, a book that profiles the top faculty at 122 U.S. colleges and universities. Four Calvin professors—history professor Dan Miller, chemistry professor Douglas Vander Griend, philosophy professor Kevin Corcoran and biochemistry professor Larry Louters made the cut. All four professed themselves gratified by the honor and somewhat mystified by the process of selection. The Best 300 Professors is a collaboration between the Princeton Review and RateMyProfessors.com, a website that allows students evaluate their faculty. The Princeton Review used surveys of hundreds of thousands of students to create a list of institutions where students highly rated the quality of their professors' teaching and accessibility. They then used information from RateMyProfessors.com to identify more than 42,000 professors at those schools that were highly rated by students. Comparing the surveys to the site, the company narrowed the list to 1,000  candidates, then did further research—including interviews with the candidates and their peers—to choose the 300. Miller, Vander Griend, Louters and Corcoran recently discussed how they felt about being among the chosen, what they like about teaching and what they believe students like about faculty.

How does it feel to be among The Best 300 Professors?

Corcoran: That a little college like Calvin should get four out of 300 is unbelievable. Whatever percentage it is, it’s a remarkable thing that we would have that many in the 300.

Miller: It’s nice to have Calvin on the map.

What do you think of the collaboration with RateMyProfessors.com?

Miller: I think it's fair to say that the site is a collection of comments by a small number of students … which should in no way be compared to a statistically meaningful teacher-evaluation survey.

Louters: I don’t think Calvin students use it much.

What do you think students value about teaching?

Louters: They want a prof that’s really, clearly on their side throughout the learning process.

Vander Griend: And they figure that out very quickly. Is this prof eager to see their students succeed? I think those are the values of many of the professors at Calvin.

What have your learned from your students?

Corcoran: Personally, I learn of some great bands and musical acts. Many of my students have just fantastic taste in music! And they share it with me. Professionally, the main thing I have learned from my students is humility, compassion and gratitude. All of us have a story or narrative that has shaped us and helped to form us into the persons we are. Many of those stories have their fair share of heartache and sadness. My students are human beings. They remind me that we're all in this together. This journey of learning.

What do you want every student to learn in your class?

Louters: An appreciation for the discipline and for the range it has in terms of problem solving. I go to students and say, “This is a 10-year, or a 20-year concept," meaning I expect them to remember the concept when they come back to visit Calvin 10 or 20 years from now."

Vander Griend: I expect students to push themselves to be better students by the end of the course—or I at least expect to push them. You’re learning to learn.

Miller: I hope they come out of my class with a sense of agency in the world—seeing themselves as a significant actor.

Corcoran: I like to get students interested in what philosophy is … I’m excited about the questions we ask in there. They’re 17, 18 years old. We ask them what does it mean to be moral and what does God think of suffering? You can come up with questions that they’re going to struggle with … If I can get them to think about these things now, when things are moving at a clip and they can’t get them to stop, maybe I can at least get them not to throw in the towel.

Miller: I recall a student I taught at North Carolina State University in the spring of 1983. He had been a linesman on the football team … . He was not a strong student and worked all semester long to pass my class. When I informed him that he had earned a "C-" he was very happy; he said that it was the first "real grade" he had gotten in college because when he was on the football team, he was placed in special classes where he was guaranteed to get a passing grade no matter what. I have always admired him for the pride he took in getting an honest grade, even if it wasn't one that most students would have been pleased to earn.

Miller: I teach for free. I charge through the nose for grading papers.