Foreign service officer as an ambassador for the U.S. and for Christ 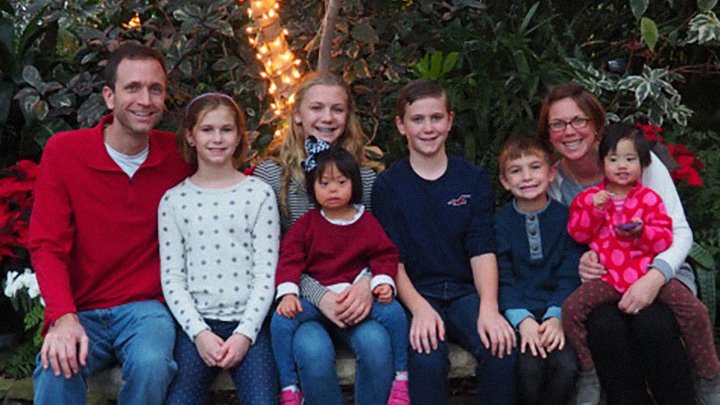 Adam Vogelzang and his family.

For Calvin graduate Adam Vogelzang ’97, being a foreign service officer since 2004 has made him realize his vocation as an ambassador for Christ, both figuratively and literally.

“I have a commission from the president of the United States, so that’s sort of my sending document. You’re on duty 24 hours a day and you’re being watched because you’re a representative of the United States. The same is true as a Christian: you’re on duty 24 hours a day,” he said. “I feel like that’s what God’s commissioned all of us to do: to go out into the world and be his witnesses.”

As a freshman at Calvin, Vogelzang planned on being a doctor, like his father was. Half way through his sophomore year, he began to think differently. “I hit organic chemistry and I was like, ‘No way, man, I’m out of here,’” he laughed. “But the same semester I took organic chemistry, I took international politics, and I loved it. It was so much more interesting to me. My grandfathers were both in the Navy during World War II, and it added an appeal to me: how can I serve my country?”

After graduating from Calvin with his bachelor’s in political science, he earned his master’s degree in international affairs at George Washington University. Since then, Vogelzang has served his country on five assignments: to Monterrey, Mexico; Yerevan, Armenia; Toronto, Ontario; Bermuda, and now Matamoros, Mexico. Despite living overseas for 12 years, his family has returned to their home in Grand Rapids for short periods.

Each of Vogelzang’s five assignments have been a little different. Currently in Matamoros, he is the political economic officer at the consulate, responsible for the Mexican State of Tamaulipas.

“Anything that goes on along the border area or the interior of the state, I try to keep tabs on. I do that by trying to stay up to date by reading local news, reading social media and meeting with people. I make contacts with local business leaders and local politicians and representatives of civil society,” he said.

“The big challenge in Tamaulipas is the violence that’s pervasive because of the drug cartels, and corruption. What we’re trying to do is first and foremost make it a safer place for both Mexicans and Americans, and we’re trying to make it a place that continues to welcome U.S. investment and safer U.S. visitors,” he added.

Since Vogelzang has been immersed in many different countries and cultures, he is thankful for the openness to worldviews that he acquired at Calvin. “That’s something you have to be able to do in the foreign service: to be able to understand different worldviews and religions and talk to people without judging them, but listening to them,” he said.

Being a foreign service officer hasn’t been easy for Vogelzang, but it is work that he is grateful for and dedicated to. “Your friends, church and house change every few years – there’s so much transition and instability, and the stability is your family. Your home is where your family is,” he said. “[God] doesn’t just call you to live the American dream and be successful at your job and make a lot of money, and just go to church on Sundays. There are certainly days and weeks where it’s really hard, but God’s brought us through it.”

Vogelzang, his wife, Carin, and his six children will be moving to Washington D.C. this summer for his sixth assignment. They look forward to adopting their third child from China late this year.

“God has commissioned all of us to go out and baptize and make disciples of all nations. God’s prepared me for this career but it’s also taught me a lot about the Christian faith and about how we represent God,” he said. “As a Christian, I speak for the U.S. government, but I also speak for God wherever I go.”