For the team: building Calvin spirit 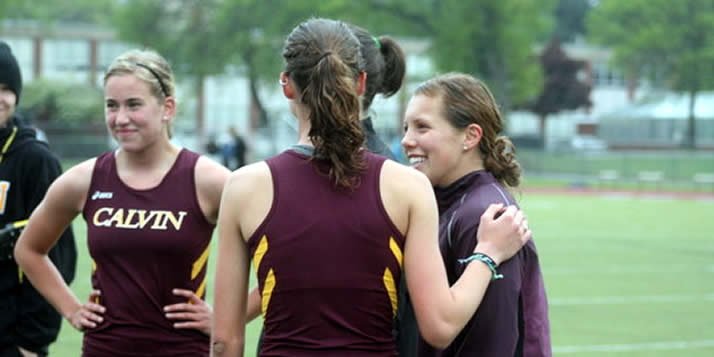 Calvin athletes learn spirit as a part of the sport.

Junior Nick Kramer, a Calvin standout in both track and field and cross country, remembers the Nationals indoor tournament earlier in the season where the Calvin Chant made all the difference.  With a half-mile remaining in the race, Kramer recognized that first place was out of reach. “I was ready to start feeling sorry for myself and jog it to the finish line when I heard ‘Calvin! Calvin! Calvin!’” he said.

That cheer, he said, fuelled Kramer to the finish line: “I realized I was representing an entire student body (that) was counting on me to do my best,” he said. Kramer finished the race an All-American.  “At Calvin,” he explained, “we use the team to help us reach our goals.”

In the traditional sense of the term, track and field and cross country are not team sports. Aside from relays, the events are designed for the individual.  But at Calvin, the track and field and cross country teams also function as mutual support systems, said Kramer: “The success I have had at Calvin could not have been done without my teammates. We are always challenging each other.”

The idea of team

And Bret Otte, Calvin’s head track and field coach, is intentional about instilling team spirit in his squad.

“The subtle nature of the sport is that we are very dependent on one another in practice for encouragement and to push one another,” Otte said.

“The goal is to know when a distance person ran well when you're a thrower or know that a jumper jumped a PR (and at what distance) when you're a sprinter,” said senior Rachel Boerner, one of the Knights’ most accomplished runners.

A very basic way that Calvin running teams demonstrates team spirit is by just showing up. “I've never seen more Calvin athletic gear than I do at every single track practice,” said Boerner.

And oftentimes, teammates will carpool to Nationals and camp out to support their qualifying teammates. And do the chant.

“We always have the largest fan base at a National meet and I think that shows just how far are school spirit goes,” Boerner said. Opposing coaches and athletes regularly compliment the Calvin squad on their spirited and dedicated sense of team, she added.  “Rain or shine, warm weather or cold, a large portion of our team is at nationals, whether they are competing or not. This is what makes Calvin College different than every other school.”

“That's how big of an impression Calvin College's track spirit and team unity has made on the members of this team. Once you experience this kind of team, you'll never forget it,” she said. 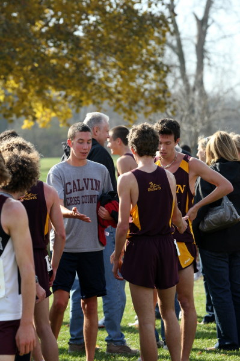