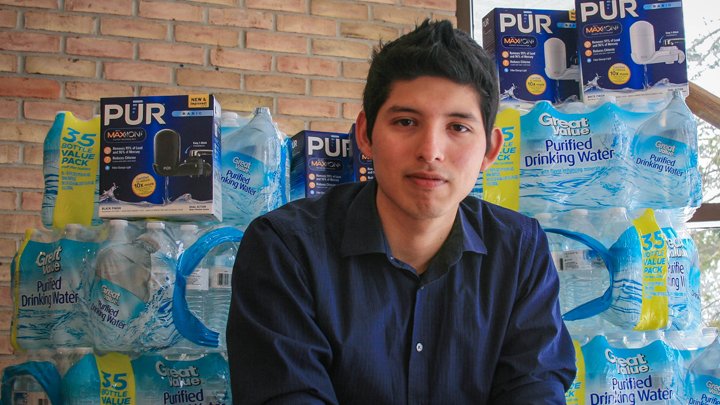 When Calvin College senior Martin Cervantes learned about the Flint water crisis, it hit him hard. Maybe because their reality was once his reality.

“I lived in Mexico for 13 years before I moved here [Leland, Michigan]. We were never able to drink out of the faucet in Mexico, always had to buy water,” said Cervantes.

Cervantes said he was wary about drinking out of the faucet when he first moved to the United States in 2007, but he slowly became accustomed to it.

“That [experience] has always been present on my mind when I hear people locally, less than two hours away, having this issue,” said Cervantes. “They have always been able to drink, bathe, cover all necessities with the same water, and they can no longer do that. While I can’t completely comprehend what they’re going through, I can somewhat relate, and I don’t think it is fair in any way.”

Cervantes was moved from a recognition of injustice to a resolve to take action. And so he started an event on Facebook called the Flint Water Drive & Distribution. He’s inviting the Calvin community and the West Michigan community to join the effort in two ways—to donate bottled water and water filters and/or carpool to Flint on Saturday, January 23, to deliver the water to the American Red Cross and then work with them to go door-to-door delivering water to families in need. (Bottled water and filters can be brought to Calvin College’s Mail and Print Services Building—located at the Lake Drive entrance to campus—from 8 a.m. to 5 p.m. on Friday, January 22 or before 10 a.m. on Saturday, January 23. The group will leave campus for Flint at 11 a.m. on Saturday and return at 6:30 p.m.)

Cervantes says donating money towards this effort may be seen as more efficient, but in talking with the American Red Cross, they said a real need is manpower to get the water to residents. Plus, Cervantes stresses the importance of building relationships with the people of Flint as he’s working with student senate on a proposal that would empower this student-led initiative to be much more than a one-time event.

“For students, there is importance of being boots on the ground. You are creating a relationship, which is an important concept in creating change,” said Ethan DeVries, student senate president. “You can’t help solve anything from standing afar, you won’t understand, won’t grow relationships that are beneficial down the road. It’s kind of like if you have a cold and nobody shows up, they just send a card.”

Administrators agree. And they are delighted to see yet another student’s passion intersecting with a need in the world.

“It’s a blessing to see our students embodying the college mission. Calvin is a place that fosters curiosity in students as well as a sense of agency,” said Sarah Visser, vice president for student life. “When our students see evidence of injustice and brokenness in the world, they respond with compassion and action.  This blending of head, heart and hands is the core of what it means to live wholeheartedly as Christ’s agents of renewal in the world.”

Cervantes, who is a member of the college’s Food Recovery Network—a student organization that fights waste and feeds people in the local community—says his actions reflect the heart of the Calvin community.

“We always talk about being stewards of creation, doing what we can and I think if there’s one thing I’ve seen here at Calvin and just learned is the amount of passion and drive that people have and care for others,” said Cervantes. “While we recognize our limitations, we see a city like Flint, an hour or so away from us, lacking this basic need of water and we know this is something that we can and should do something about as we have the resources. I wake up every morning, take a shower, get a glass of water—that’s something they can’t do every morning.”

For more information on how you can get involved, visit the event page on Facebook.