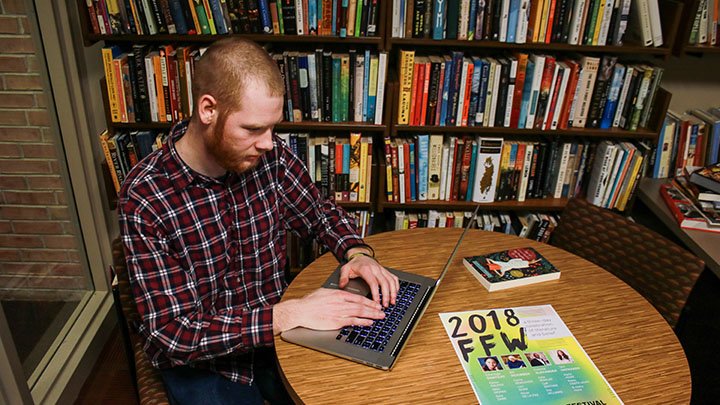 Calvin College sophomore Pete Ford is on Festival’s student committee and is one of the Calvin Center for Faith & Writing’s five Hudson-Townsend Student Fellows.

Pete Ford graduated from high school in 2014. He took a couple of years off. And, in 2016, he again began exploring the possibility of going to college.

Ford stepped onto Calvin’s campus for the Festival of Faith & Writing in April. The rest is history.

The door to Calvin

“That opportunity to wander around the campus during the Festival and to see the thought process and the desire to have conversations at Calvin, that’s really the reason I decided to come here,” said Ford, a second-year literature major.

Now, in just two years, Ford has gone from curious observer to helpful guide. Ford is on Festival’s student committee and is one of the Calvin Center for Faith & Writing’s five Hudson-Townsend Student Fellows. One of his responsibilities in advance of the Festival is getting to know the speakers’ work and helping write bios for the website and program.

Lisa Ann Cockrel, director of the Festival of Faith & Writing, is always excited to welcome new faces to Festival. And she says the three-day gathering can have a profound impact on speakers who hang around for a while.

“What I hear from them is a kind of happy shock that a place like this exists. They often comment on the attentiveness of the audiences, the types of nuanced questions people ask about their work, the respectful engagement with faith from lots of different perspectives,” said Cockrel.

For a number of writers, the Festival provides readers who are uniquely engaged with the spiritual and moral implications of their work.

“When Joyce Carol Oates was here, she told Jennifer Holberg that she can pretty much predict how every book she writes will be reviewed before she writes it. And rarely if ever, do those critics think deeply about faith and religion in her work. But it’s there, even if folks aren’t paying attention to it. And it’s there in the work of many ‘secular’ writers,” said Cockrel.

“A lot of the writers who come here are grateful that there’s a place where we’re thinking about the religious elements in their work and also where that engagement doesn’t come with judgment. Instead, we read with open hearts and a spirit of inquiry. And I think this goes back to the best of the reformed tradition that doesn’t feel like it has to be afraid of the world—a tradition that encourages us to engage other people’s creative literary witness to being alive with curiosity and care because every square inch is God’s.”

And this type of engagement creates a unique dynamic and pushes the writers and readers into spaces oft not explored. In fact, Cockrel said that multiple speakers who have spent 24-plus hours at Festival, have told their audiences they rewrote their presentations after being on campus.

“There’s something that happens at the Festival of Faith & Writing where we still surprise each other in that space,” said Cockrel. “It’s a place for people to make genuine connections with people around stories and poems that have enlarged their vision of what it means to be human and a person of faith.”

And Cockrel hopes that each and every person who comes to Festival leaves having experienced some moment of communion.

“I think that fundamentally there’s this irony at the center of reading—it’s something you do mostly alone, but yet it is this radical act of seeking communion, because you read to seek connection to something outside yourself, whether that’s another person’s story, or the natural world, or God. And I hope that you could map those kinds of possibilities for connection onto the Festival,” said Cockrel.

Students like Ford have experienced that connection at Festival, and for him, it provided a pivot point in his life, pointing him towards an English major.

“It’s not a conference,” said Ford, “it’s a party where literature is celebrated.”

“That’s what’s great about Festival,” said Cockrel. “You sometimes wander into a talk or reading or interview you aren’t sure you’re interested in … and love it.”